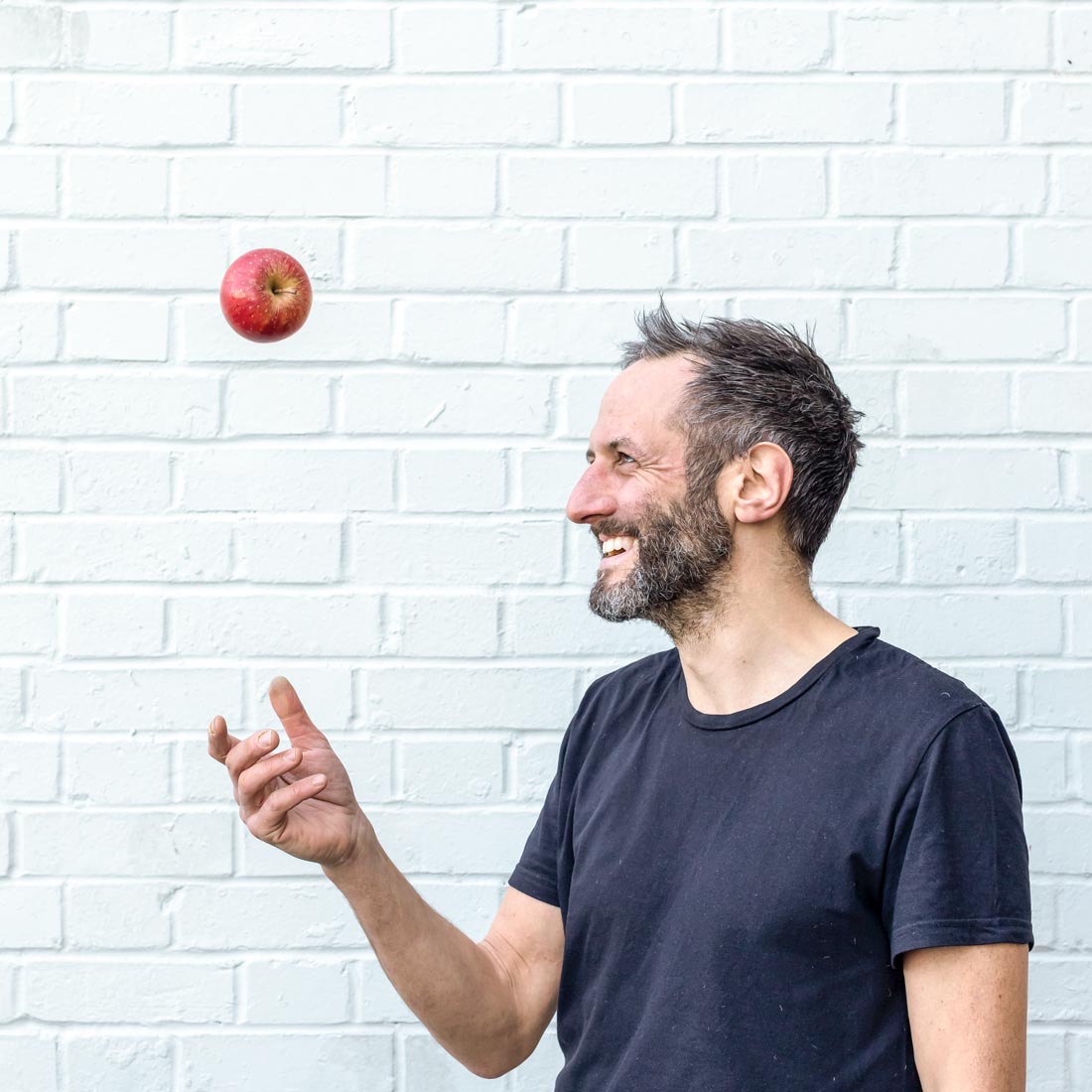 In recent years, Barford has become obsessed with the apple and has been using it as a lens through which to look at the world. He uses the humble fruit to explore fundamental questions driving human nature, especially our anxiety afflicted society and our incessant need for more.

Although Barford produces work in a wide variety of materials, he consistently returns to ceramics, utilising mass and industrial production processes. From the monumental sculptures composed of thousands of individual ceramic pieces to the large-scale energetic word drawings that repeat incessantly the same word, his pieces are a labour intensive accumulation of fragments that gain meaning in their totality. 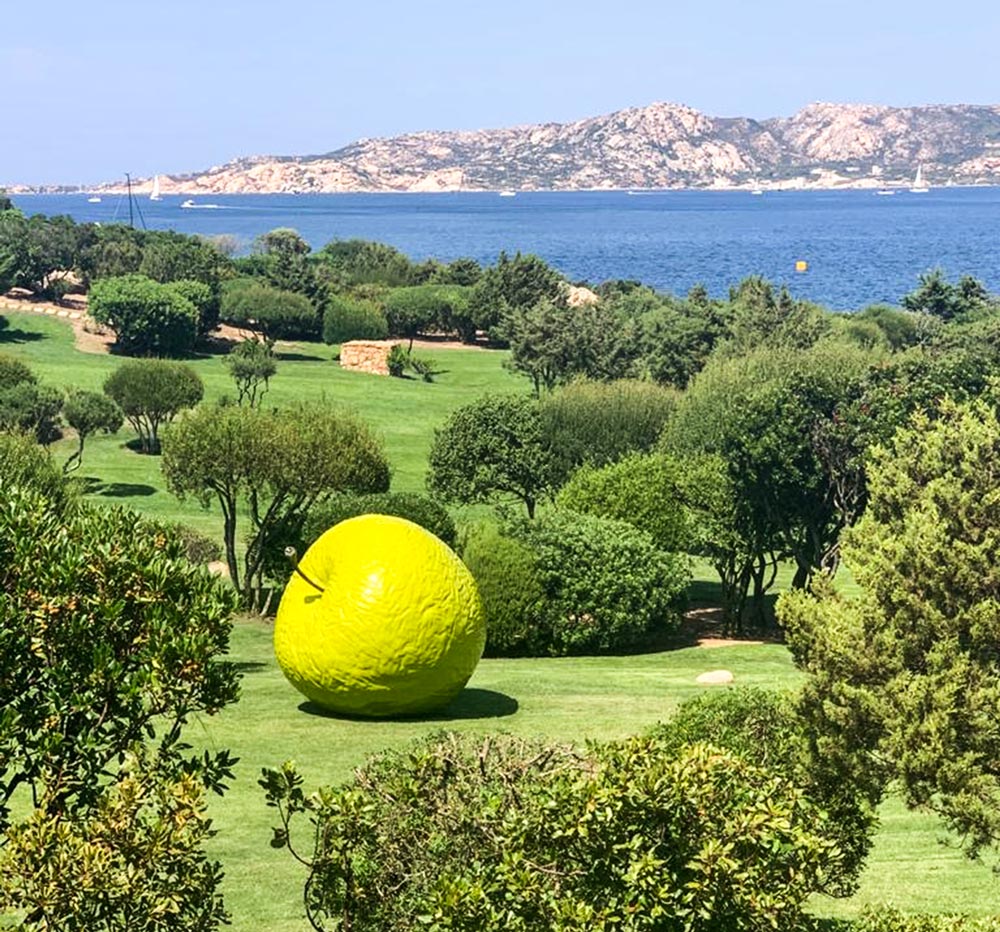 Barnaby talks to our Exhibition Programme Curator, Antonia Harrison, about his work with apples:

For your project More More More you take the form of the apple and rework it in many forms, what led you to the fruit and how has it come to express the idea of More?

I was looking at ‘happiness’ and the lack, or perceived lack, of happiness we are experiencing. I looked at it from many points of view including historical, political, economic, religious and biological. I came to a conclusion that we have an incessant need for ‘more’. Not just more stuff but more of everything, more fun, more friends, more likes to name a few. I tend to try and go back to the beginning when looking at something and started thinking about early stories of wanting more. I naturally thought of Adam and Eve, for they supposedly had everything but the temptation was there for more, they took the Apple!

I wanted to make the Apple tree. I wanted to make a tree with apples each representing a desire, knowledge, love, power, sex, even division, hatred, control. I wanted people to be able to pick the apple they wanted and for it to snap from the tree thereby reenacting the moment of the downfall of mankind.

This as you can imagine got me thinking about ‘the apple’. As I started looking into it, of course I realised that it was Adam and Eve but also the judgement of Paris, Heracles, Steve Jobs, Newton, Snow White, William Tell, it was Magritte, Cézanne and the Beatles. It was even the American Frontier. I realised it has been a symbol of love, division, immortality and death. Of sin and redemption.

I knew all of this but it wasn’t until I put it all down in front of me that it had such an impact on me. It was like opening a port onto a new world. One that I wanted to be part of. 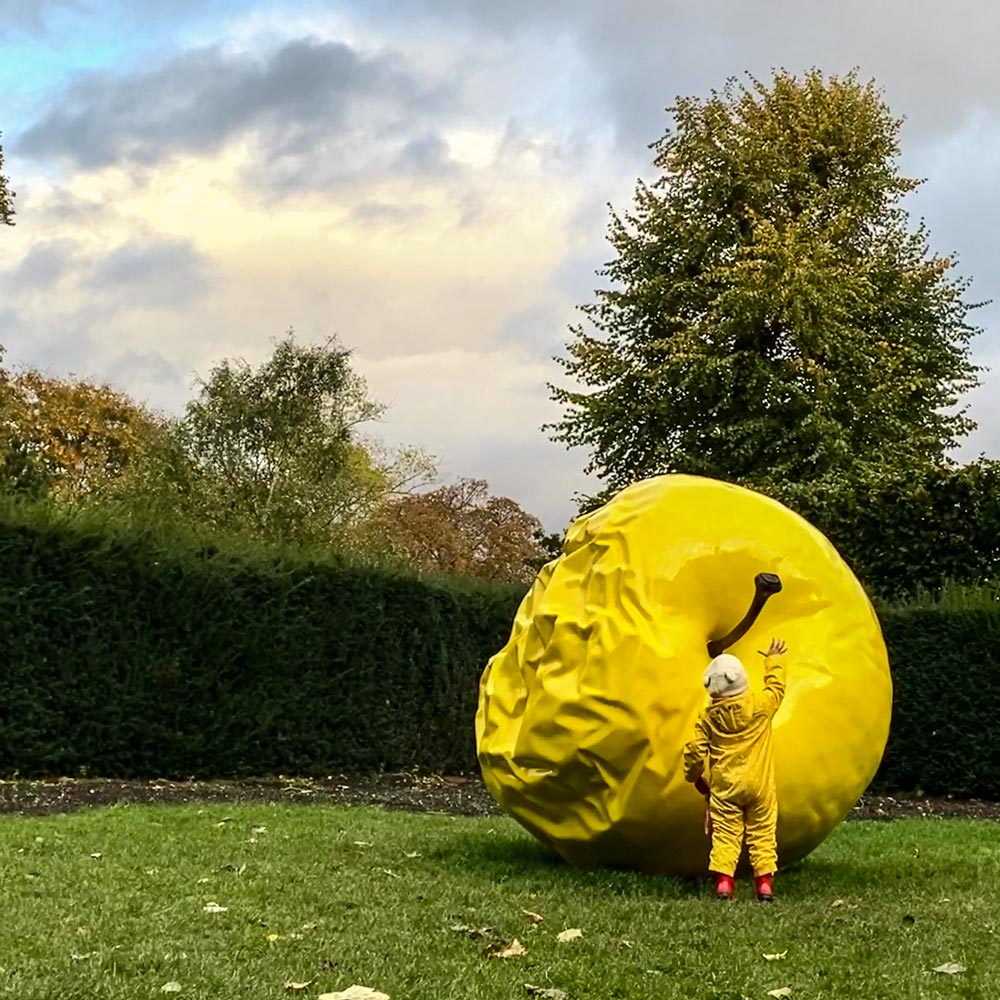 Barnaby Barford - This Earth of majesty this seat of Mars. Copyright © Bea Campbell 2021

The history of art is laden with apples and artists who have chosen the fruit as inspiration – from Cézanne’s astonishing apples to Magritte’s surrealist icon of choice. How much has this context come to bear on your work?

One could be put off by this and be worried that it had all been done before. On the contrary, it’s fantastic to want to be a part of this rich history. Because the apple has been so many things. It can really now be anything. We can project anything we like onto it. It can simply be an apple, but it can also be ‘us’, it could be the planet or the universe. It can represent nature and it can represent society, humankind. It is instantly recognisable, it is humble but so powerful.

Apples & People explores how connected the apple is to humanity and vice versa. As a symbol the Tree of Life holds apples which cut to the core of human vices and virtues. How relevant are these ideas to your work and society now?

I am trying to understand society, why we act as we do and why we find ourselves in the situations we do. It’s interesting to think about human virtues and vices, sins and charities. I don’t think we as human beings have really changed at all. Our hopes, desires, fears and frailties can be traced back throughout history. They are timeless but talk about contemporary issues. 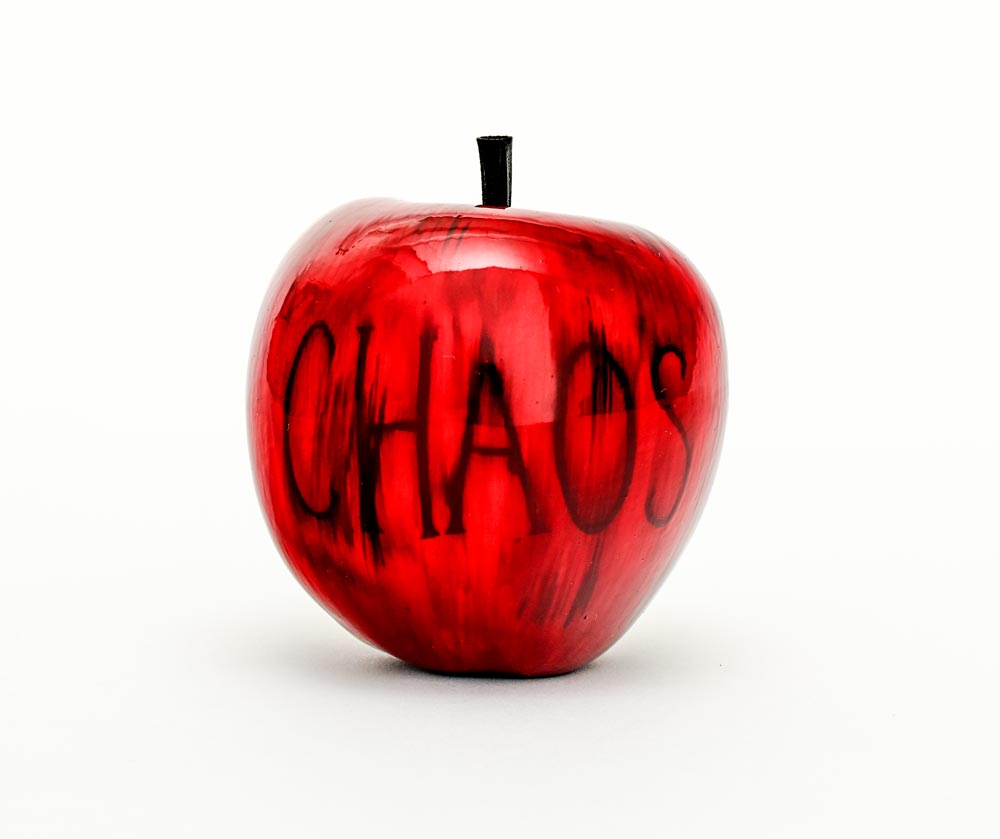 One of your giant fibre glass apples that will be part of the future Apple exhibition programme in Herefordshire is titled ‘Land of Hope and Glory’. What does the form of the apple explore in this work?

I have made a series of these large sculptures. These were borne from me thinking about those in power and their unscrupulous desire for more. How that affects the rest of us, how that affects not only society but the environment too.

There is a beauty to this decay but the shiny brightly coloured surface smacks of something that still thinks it’s great but sadly it’s rotting from the core.

Your Tree of Life sculpture holds apples which can be broken off and kept. There is a real sense of fun but also a personal sense of destiny with the work. How important is human interaction and tactility to this piece?

I like making work that is activated by human interaction, it is not a passive work. Fun and humour can disarm the viewer too and open them to contemplate other thoughts. 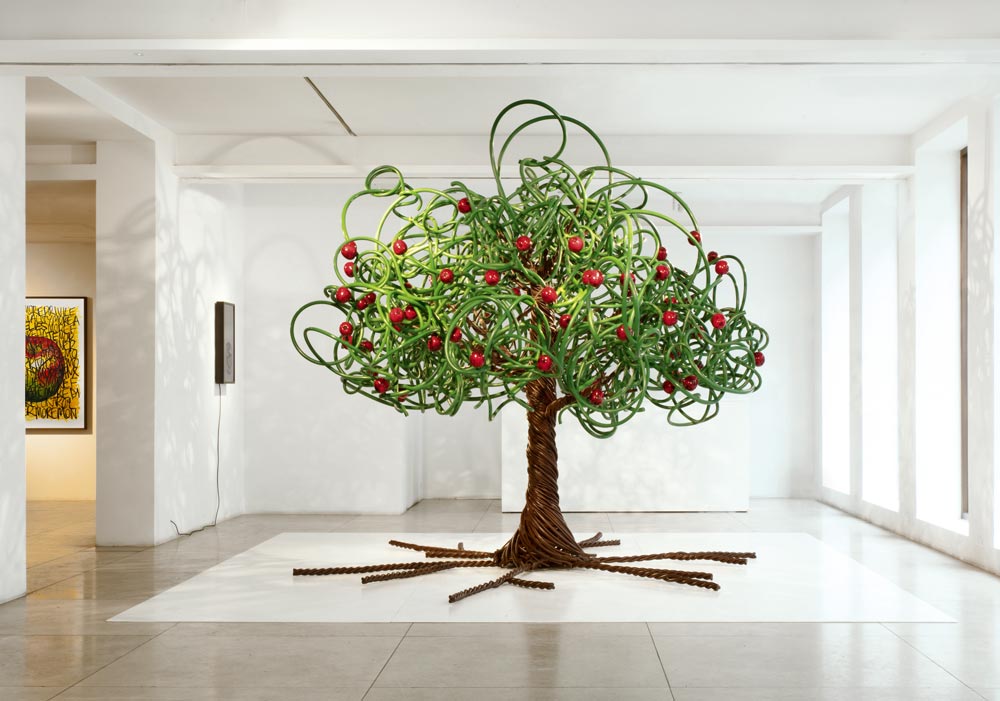 Which apple would you choose from the tree?

My kids picked HUMANITY and FACTS which I was super happy about. I picked the one with the word scrubbed out – i like the fact it could be everything and anything.

If you could give one apple to an individual to bring about change who would you give it to and which word would it carry?

Great question! Right now – Johnson – HUMILITY or perhaps TRUTH as I think he probably needs to eat half the tree just to get us through the next couple of months! 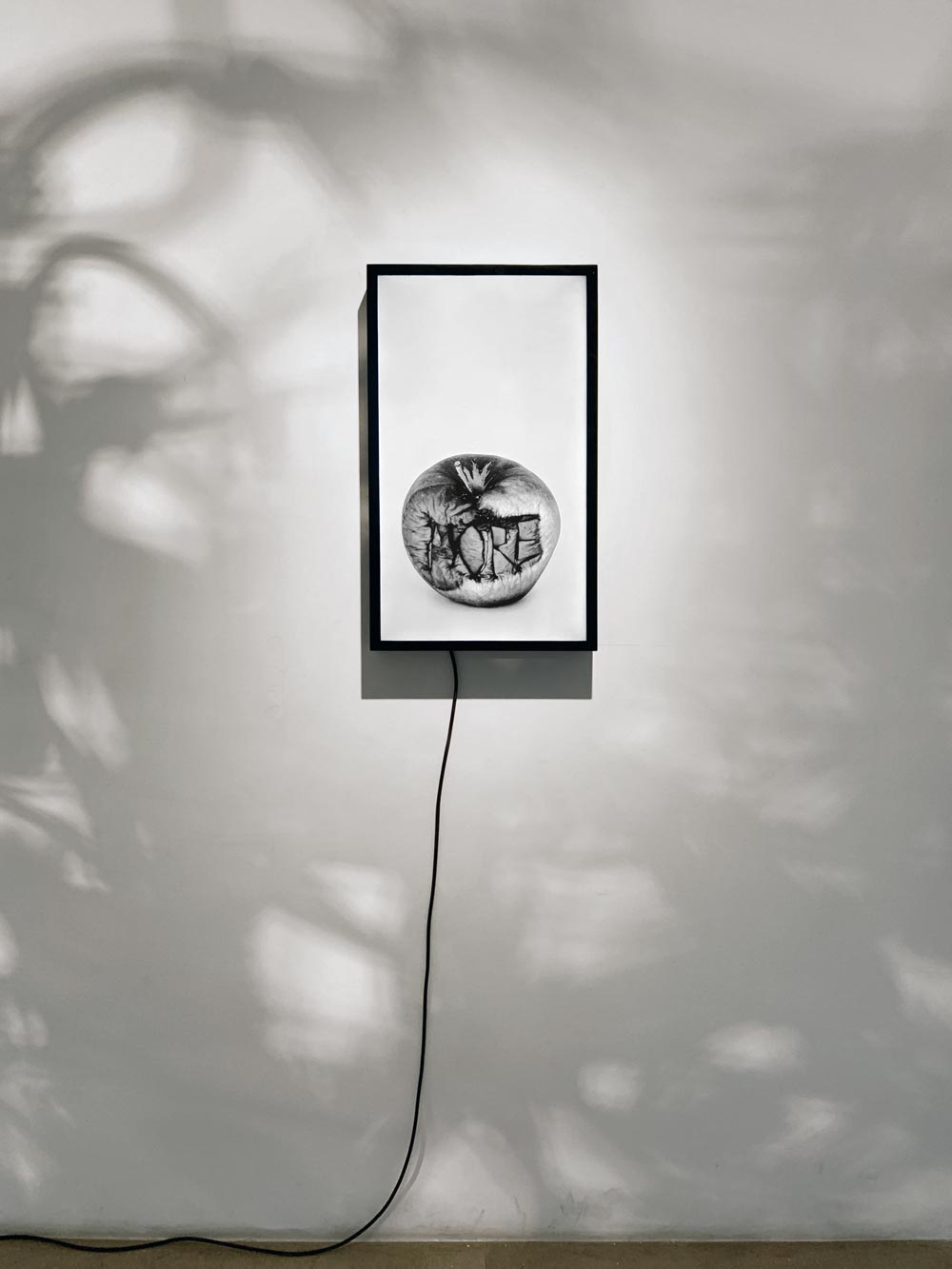