This specially commissioned map chronicles the apple’s journey across time, geography and cultures, illustrating some of the ways that this humble fruit has enriched human existence and how human care and understanding of nature has helped to shape apples today.

The hand painted watercolour map was commissioned from UK based illustrator Helen Cann.

This map forms the basis for the stories that will be told by Apples & People between January 2021 and May 2023. On a significant date for each episode, an illustrated short Apple Story will open to explore further an aspect of humanity’s close connection with the apple, building a narrative of this astonishing relationship. 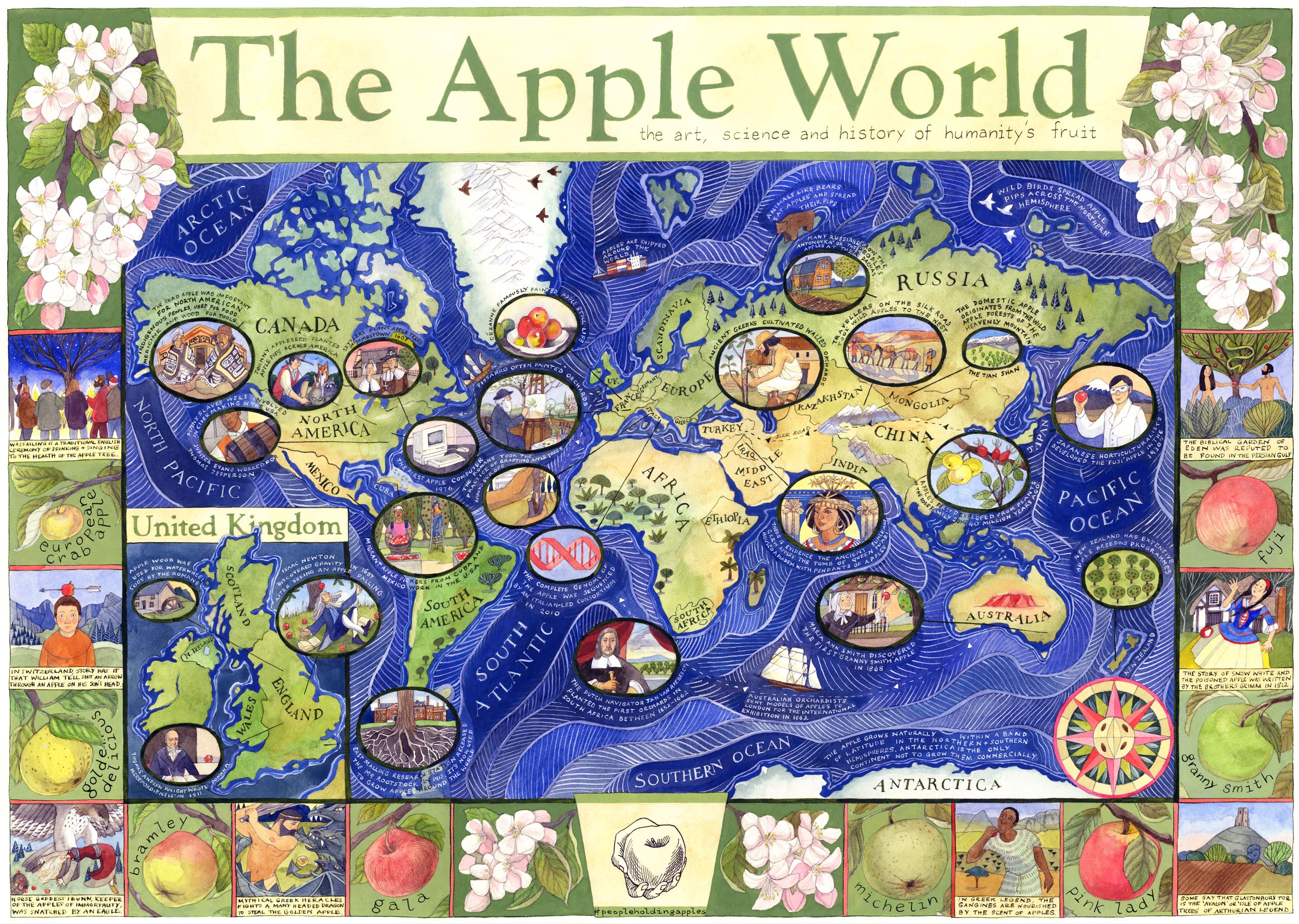 To magnify: use two fingers to increase magnification (tap first if using an iPhone)

Interactive Apple World Map – hover to discover which are the currently published Apple Stories, click to read on the Apple Stories page.

Hover over map to magnify

A poem written and performed by Herefordshire based poet and spoken word artist Charlie Staunton for Apples & People.
Film production by The Creative Arcade

“Follow the fruit of fortune on its long journey as it spreads around the world….” 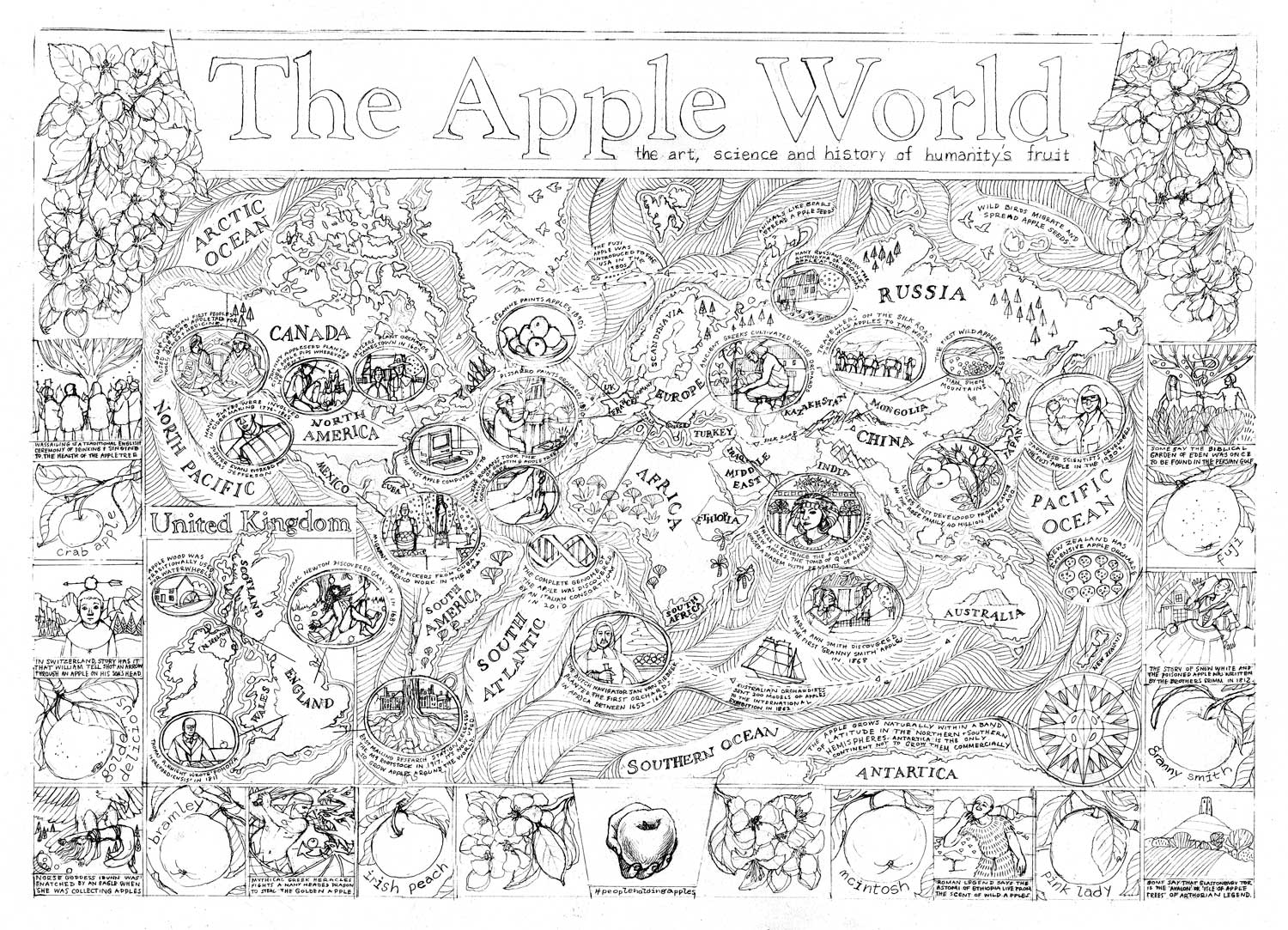 The Apple World Map commissioned by and licensed to the Cider Museum, Brightspace Foundation and National Trust © Helen Cann 2020

It has been an absolute pleasure to work on this joint commission from the Museum of Cider, the Brightspace Foundation, and the National Trust in Herefordshire – ‘The Apple World’, a map of the history of the apple and how science, culture, colonisation, travel and trade are inextricably linked with it. Like all cartographers of the past, I considered what my patrons wanted to convey through the map before I put paintbrush to paper. There was a long list of stories and apple details to include and time was spent working out the best way to organise all the information and display it clearly.

The first wild apple forests were actually found high in the Tian Shan, sometimes known as the Heavenly Mountains, of Kazakhstan. Weary travellers took those apples for food and to trade along the Silk Routes as far as the Middle East and Europe.  Here, ancient Sumerians, Romans, Greeks and Persians began to cultivate them – building orchards, tending saplings and spreading the practice of grafting.

The ages of European colonisation and exploration took the apple further – to the African, Australian and American continents. Russia, China and Japan developed their own apple varieties; the ‘Antonovka’ apple, much beloved of dacha owners in Russia and the ‘Fuji’, developed by Japanese horticulturalists in the 1930s for example… As the world industrialised and travel became easier, different apple varieties were spread around the world and trading apples became big business. Now, many of these countries export globally, some to their original colonisers.

The age of enlightenment, centuries before, had brought the study of apples – pomology – into focus and seeded the industrialisation of orchards and cider making that we see today. Eventually the apple genome was sequenced in 2010 by an Italian-led team.

Each of these historical stories were kept to the central map and shown within little oval vignettes. I decided to keep botanical details in the borders, which are filled with many varieties of apples – there are cookers and eaters, cider apples and the small wild ones and a cartouche decked with blossom.

Alongside these sit images depicting cultural stories from around the world. Apples grow on the Isle of Avalon and in the Gardens of Eden and the Hesperides. They are picked and stolen in the Norselands of the Viking gods and are poisoned and eaten in the Middle Europe of ‘Snow White’.

The compass rose, iconic of almost all maps, was designed to look like an apple core and pips. As usual, I made small thumbnail drawings to help me plan the map out and to give my commissioners some visual ideas to talk about. 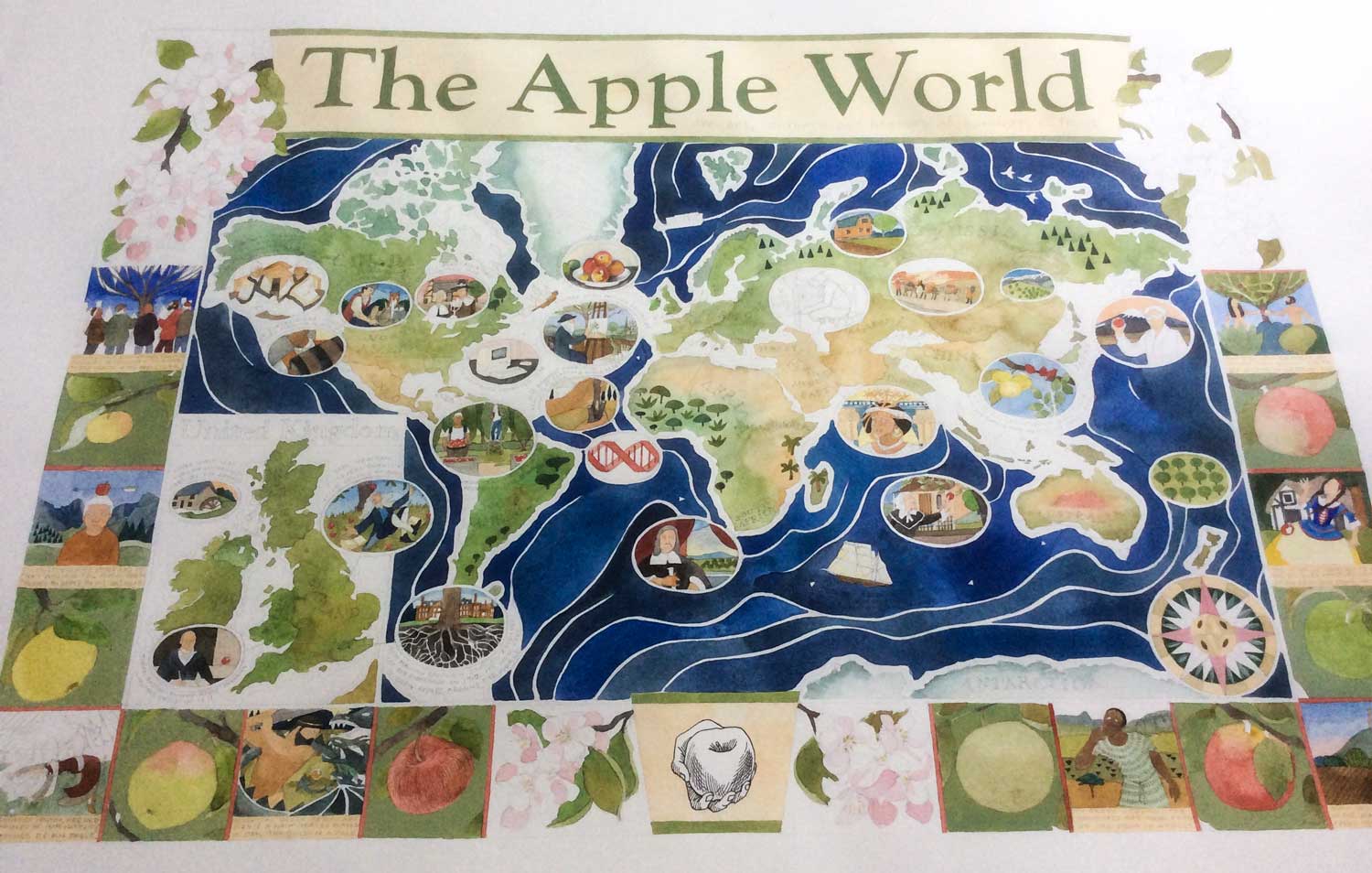 The Apple World Map commissioned by and licensed to the Cider Museum, Brightspace Foundation and National Trust © Helen Cann 2020

After feedback and discussion, I started work on the full size drawing – in this case, a large one at almost 60cms x 40cms. My work as an illustrator allows me to research all kinds of subjects and I usually spend time studying online before I begin. The Apple World map was no different. Making sure my illustrations are historically accurate is always important to me and in this instance, it also meant I got to discover such interesting facts such as the Romans grafting apple trees or what an ancient Sumerian queen wore. I specialise in working by hand and so much tiny detail meant using a magnifying glass to draw and letter clearly.

After a few adjustments, the final drawing was approved and I could begin painting, again with a magnifying glass and sometimes a very tiny paintbrush for the smallest of strokes. Using a mixture of watercolour, gouache and acrylic ink gives me a variety of brightness, colour, flow and opacity. I often work with one colour at a time but change things up for the sake of my sanity if it becomes too much like ‘painting by numbers’. The entire piece took about a month from start to finish.

As for all cartographers of the past, creating a map has always been a journey in research, information editing, curating, painting, lettering and lastly, collaborating with patrons. Creating the Apple World map has been a similarly fascinating adventure and I’m happy to continue the tradition. 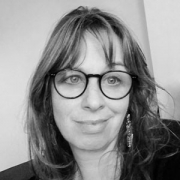