The Holographic Properties of the Apple Crunch 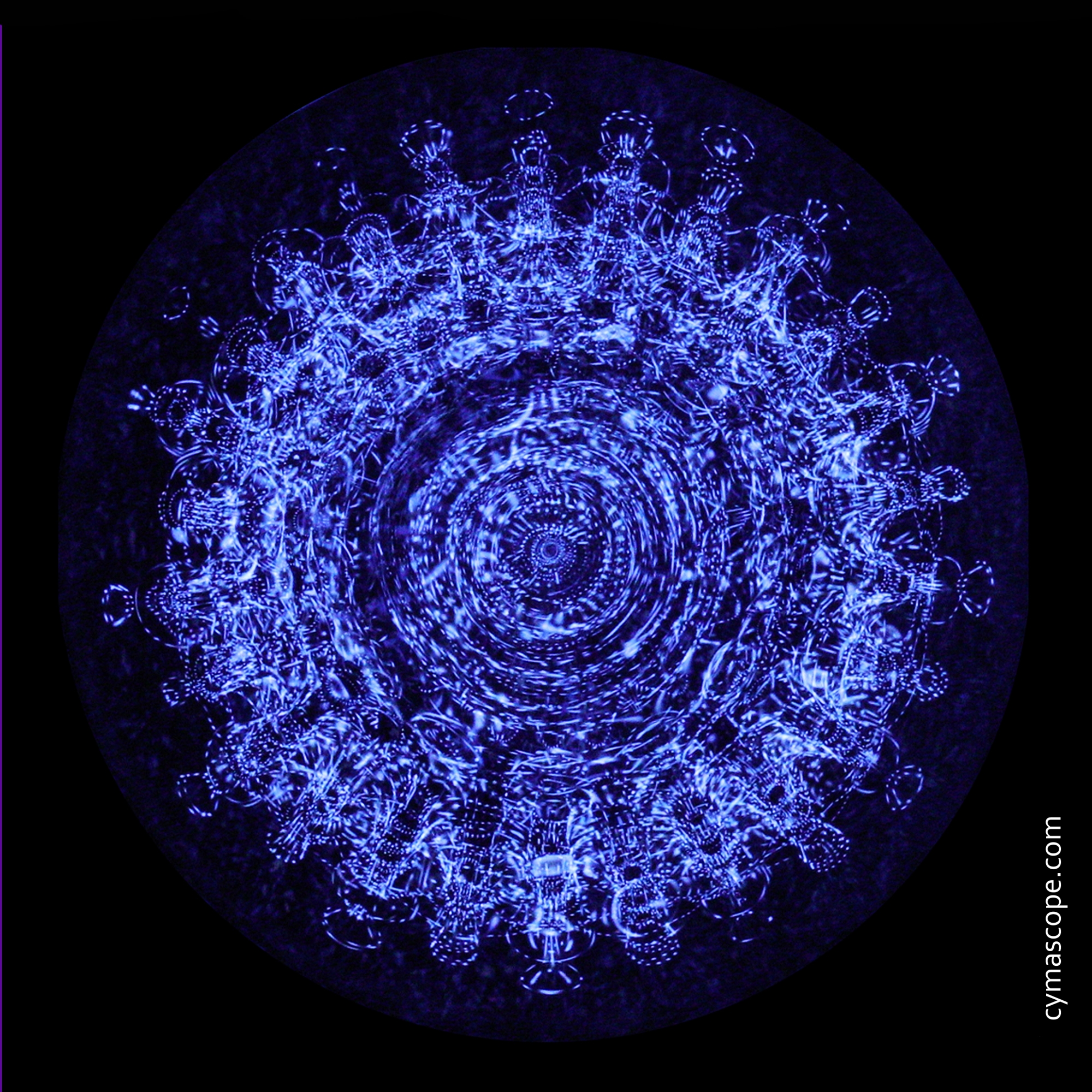 The story behind the discovery that an apple crunch sound has holographic properties begins in the mid 1990’s. At that time, English acoustic-physics scientist, John Stuart Reid, began studying cymatics, the science of visible sound, in preparation for a research mission to the Great Pyramid of Egypt. The purpose of the research was to study the acoustic properties of the King’s Chamber and its sarcophagus. 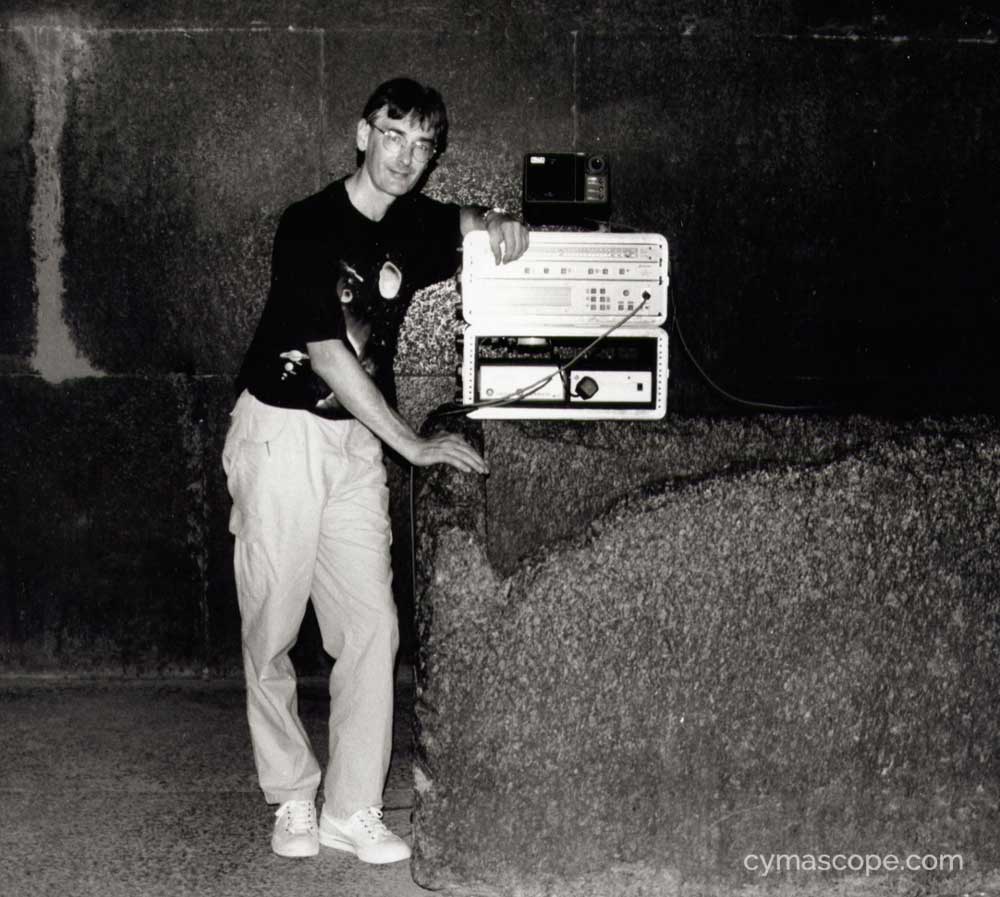 One of the extraordinary results of the King’s Chamber research concerned the cymatics experiment. The word ‘cymatics’ simply means visible sound, based on the physics principle that when sound encounters a membrane it imprints a pattern, which is normally invisible but can be rendered visible by sprinkling on sand or fine powder, rather like making a fingerprint visible on glass by dusting it with talcum powder. John’s cymatics experiment was designed to make visible the resonances of the sarcophagus, a 3.7 ton block of rose granite, hollowed out by the ancient Egyptian craftsmen and known to be very resonant due its high quartz content. He stretched a membrane across its open top, sprinkled on sand, and watched the sand grains for movement as he excited the sarcophagus with a small speaker and electronic oscillator. To his great surprise, and that of the antiquities inspector, a series of ancient Egyptian hieroglyphs began to emerge in the sand. 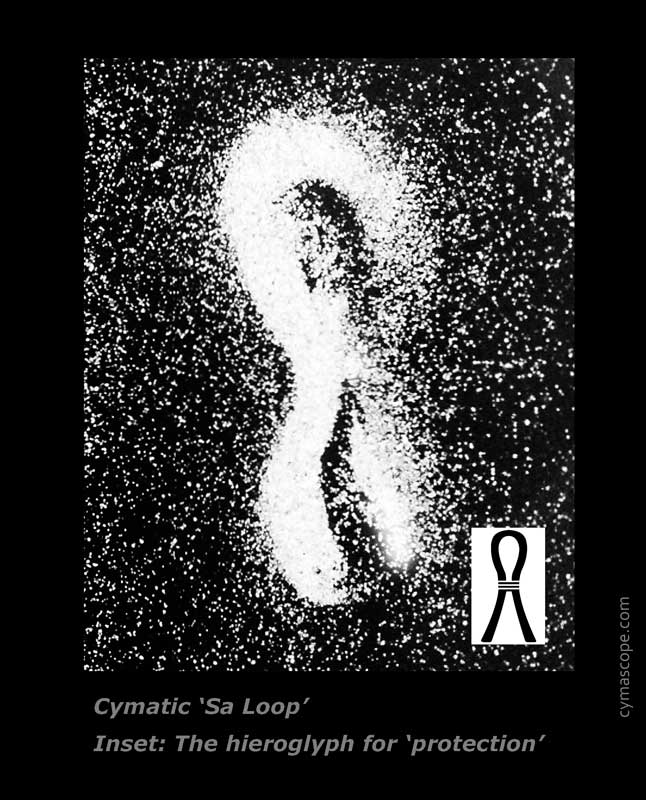 The success of this experiment led John to develop a scientific instrument to make sound visible. His early prototypes used sand as the revealing medium, but it quickly became obvious that particulate matter was two-dimensional and could not reveal fine detail.

“I began experimenting with liquid membranes, since the surface tension of liquids are highly sensitive to vibrations. I tried many different liquids, including Scotch whisky, which at least held the advantage that I could take a sip after the experiment! However, it did not provide optimal results and after many trials I discovered that pure water was an ideal revealing medium.”

An interesting connection with Egypt is that apple trees were introduced from Palestine, following the Hyksos invasion, a people who ruled Egypt c. 1638–1530 BCE. While other fruit trees, such as fig and pomegranate, were more abundant, the apple was quite rare and considered a great delicacy. One village, known to have been treated to this luxury, were the people of Deir el Medina, a protected and cosseted community on the West bank of Thebes (modern day Luxor). It was the men of that village who built the tombs in the Valley of the Kings, while the women stayed at home, some of whom are known to have written love poetry, perhaps while they ate apples! 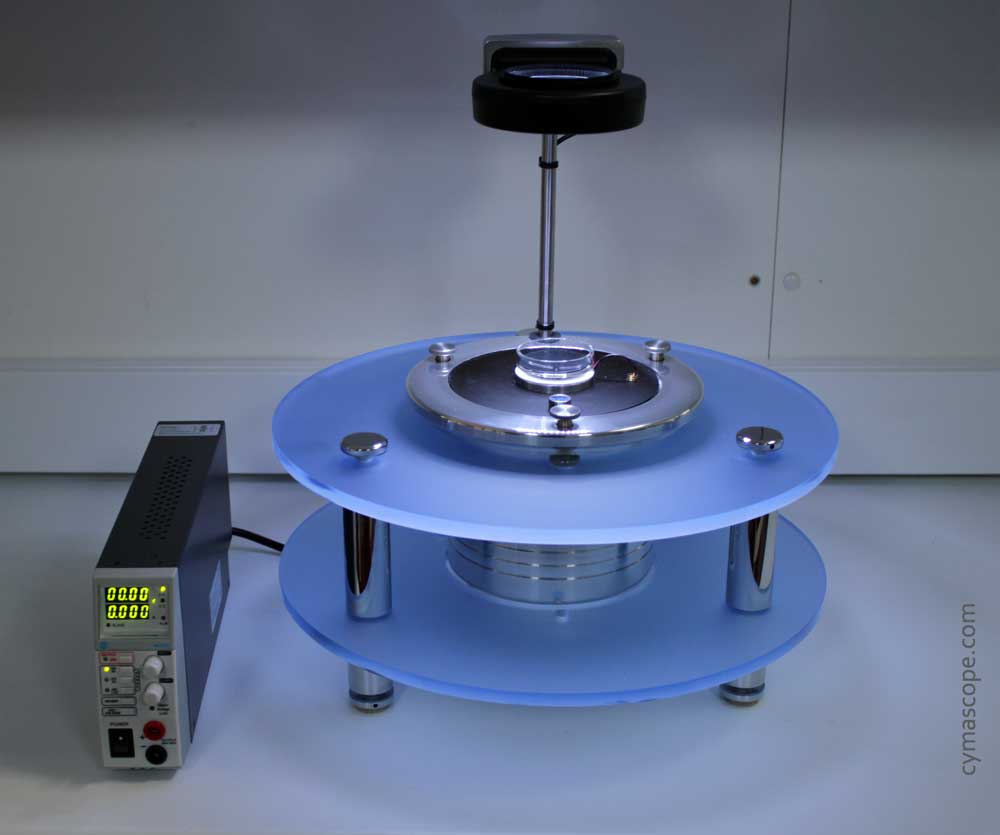 In the intervening years, the CymaScope instrument, as it has been named, has become accepted as a valuable scientific tool by many scientists and is in use at several Universities. But fast forwarding from the mid 1990’s to the present day, the Apples & People exhibition programme commissioned artist and composer Helena Cavan to develop an artistic interpretation of the crunch of an apple, inspired by scientific research. Helena introduced John Stuart Reid, who she had seen lecture at a Water Conference, in Germany. 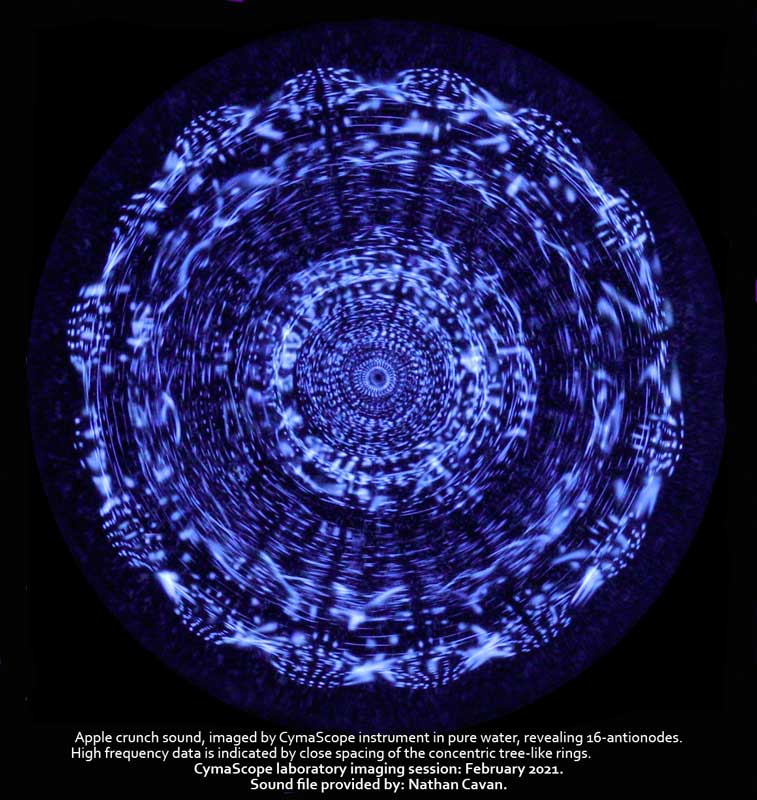 “Having witnessed the CymaScope instrument in action in John’s laboratory, I knew that it could make visible the sound of an apple crunch, so I reached out to John. He was immediately interested and it was during a Zoom conversation that he suggested imprinting an apple crunch sound onto water, but also to try imprinting the sound onto pure, cold-pressed apple juice. ” 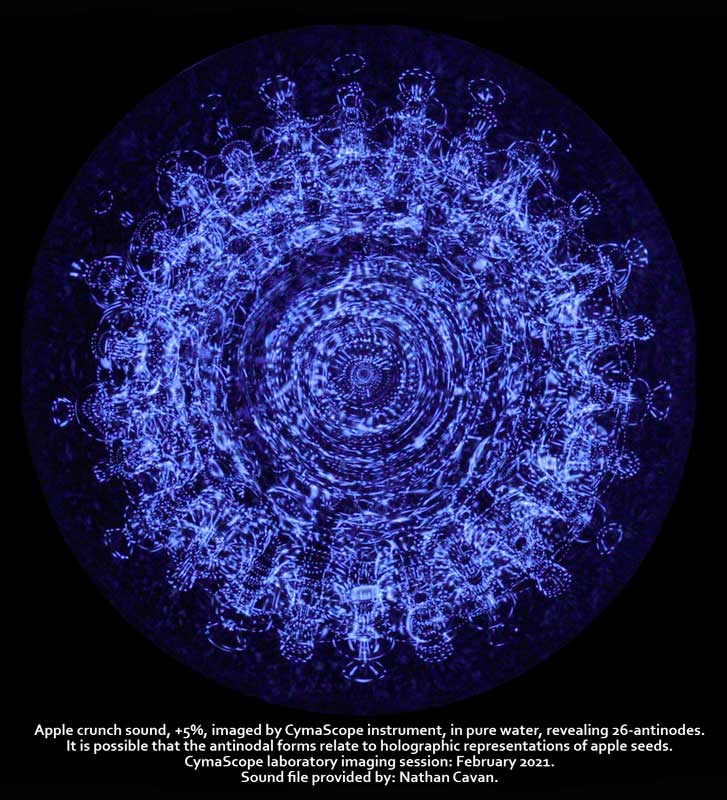 “One of the discoveries I made with the CymaScope, several years ago, is that sound has holographic properties. Put simply, this means that sound stores information about the environment in which it is created. It also means that every vibrating molecule of a sound contains all the information that exists in the trillions of other molecules in the sound wave. I emphasize the word ‘wave’ because in reality all the sounds we can hear are bubble shaped, not wave shaped. A good example is that of a violin. The strings of the violin vibrate the air causing a bubble of sound to emerge. If it were possible to zoom in to the surface of the bubble, we would find that any one molecule of air carries all the information that makes the sound unmistakably that of a violin. But let us now consider the holographic aspects of an apple crunch.” 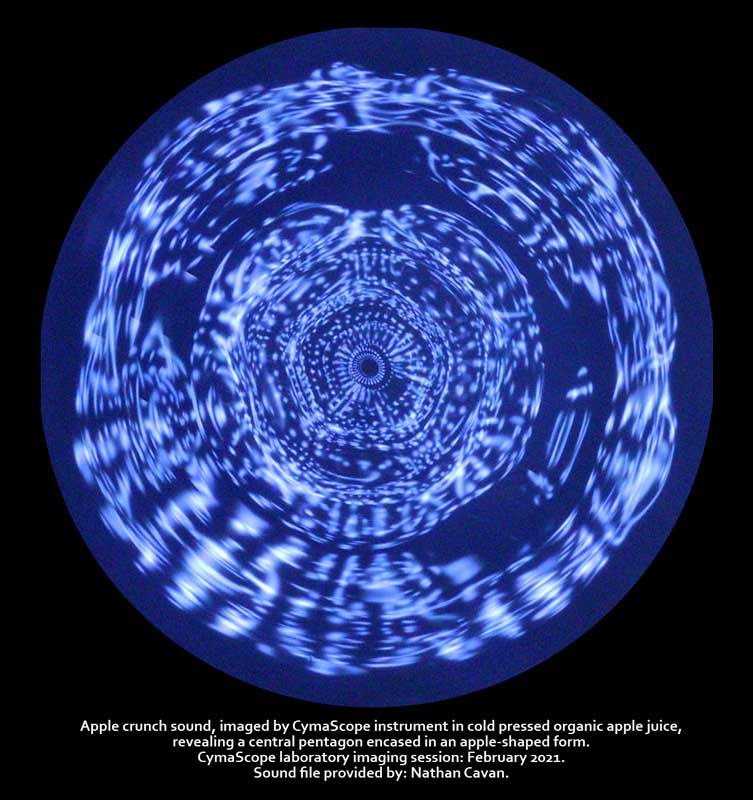 “I mentioned to Helena, during our Zoom conversation, the possibility that an apple crunch sound contains information about the apple’s structure, such as its heart-shaped profile, and its pentagram arrangement of seeds. So, it was in some excitement that I began the series of experiments in our laboratory to make visible the sound file of an apple crunch, recorded by Helena’s son, Nathan Cavan. I realized that this was probably the first time in history that anyone had attempted to imprint an apple crunch sound onto water, and I sometimes feel the pleasure of a child stepping in virgin snow when conducting a new experiment. As you will see from the results of the first two experiments, my pleasure was wholly justified, but it was when I switched to pure cold-pressed apple juice that the results caused a sharp intake of breath. Immediately, there was the five-fold central structure, enclosed in an apple shape, exactly as I had predicted. It is worth mentioning too that Nathan Cavan used an Apple iMac computer with which to record the sound of the apple crunch, and in our laboratory, the apple crunch sound made visible was captured on an Apple desktop computer! ” 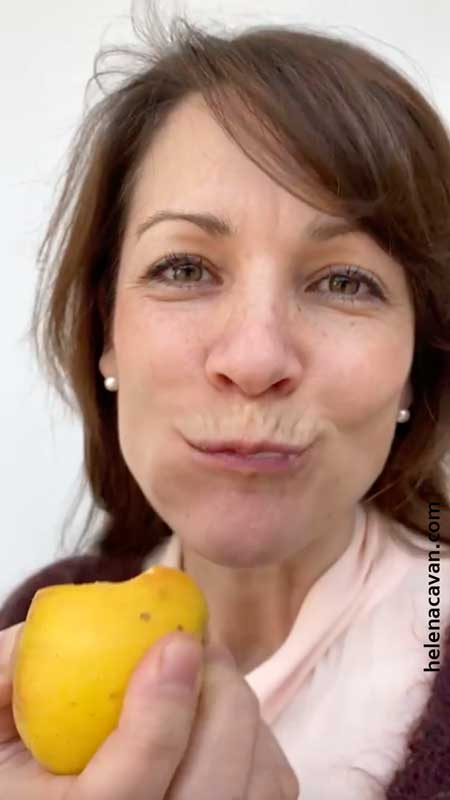 Through this commission, the Apples & People exhibition programme has enabled apple crunch sounds to be rendered visible by CymaScope instrument, a world-first. It is inspiring to see how the application of scientific disciplines has produced results that have scientific value as well as artistic and aesthetic merit.

John Stuart Reid is an English acoustics engineer, scientist and inventor on a mission to educate and inspire the world in the field of cymatics, the study of visible sound. His CymaScope invention has changed our perception of sound forever: seeing sound allows us to understand this omnipresent aspect of our world and universe fuller and deeper. His cymatics research is helping to elevate this important new field in the scientific arena, including a study on how dolphins see with sound, published in the Journal of Marine Biology and a study on differentiating the sounds emitted by healthy cells and cancer cells, published in the Water Journal.

Helena Cavan is a poet and composer living in the Cotswolds. Co-founder of The Winchcombe Poets and musical collaboration, The Cavan Trio. She was born in Washington State, USA, and began writing poetry as a small child. She immigrated to the UK in 1994 and studied music composition with Michael Finnissy, graduating with a B.Mus. LRAM in 2000 from the Royal Academy of Music.