Living by the scent of apples 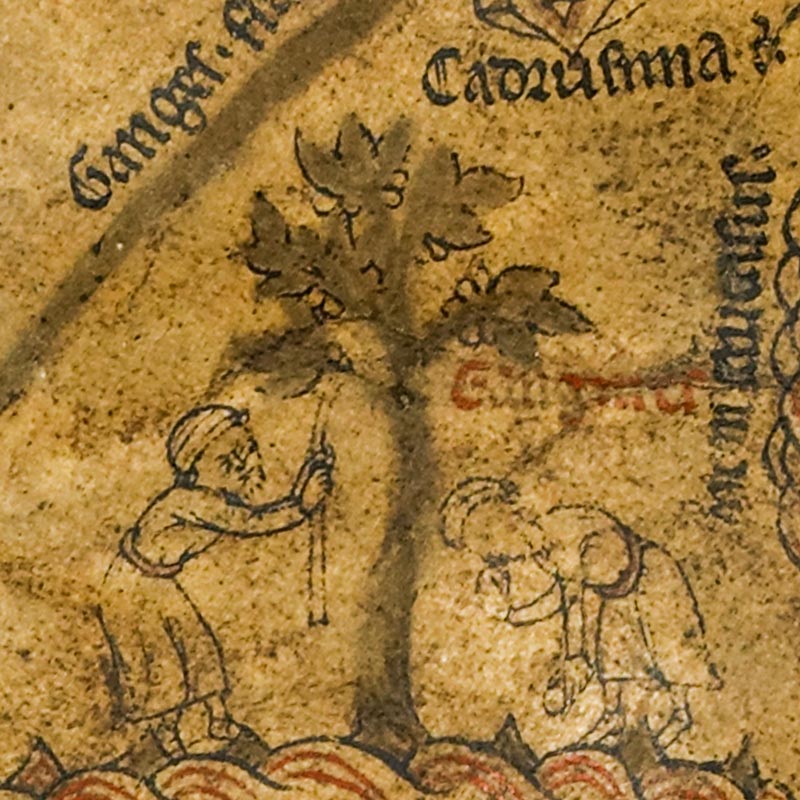 The Gangines at the source of the Ganges in India. Detail from the Mappa Mundi © Hereford Cathedral

Hereford’s ancient Cathedral emerges into history towards the end of the eighth century and is dedicated jointly to the Blessed Virgin Mary and St Ethelbert.

St Ethelbert, King Æthelberht II of East Anglia, was murdered on 20th May 794 just north of Hereford. This was possibly on the orders of King Offa of Mercia, whose daughter he had come to marry and to whom he may have represented a dynastic threat.

Among Hereford Cathedral’s unique treasures is the Mappa Mundi, a map of the world as it was seen in about 1300. It was drawn on a single sheet of calf skin vellum by Richard of Holdingham from Lincolnshire in the east of England. As the largest and most detailed medieval map, it is among the most important for understanding a medieval worldview. Jerusalem is placed at the centre of the world and drawings of people, plants, animals, and mythical creatures abound. 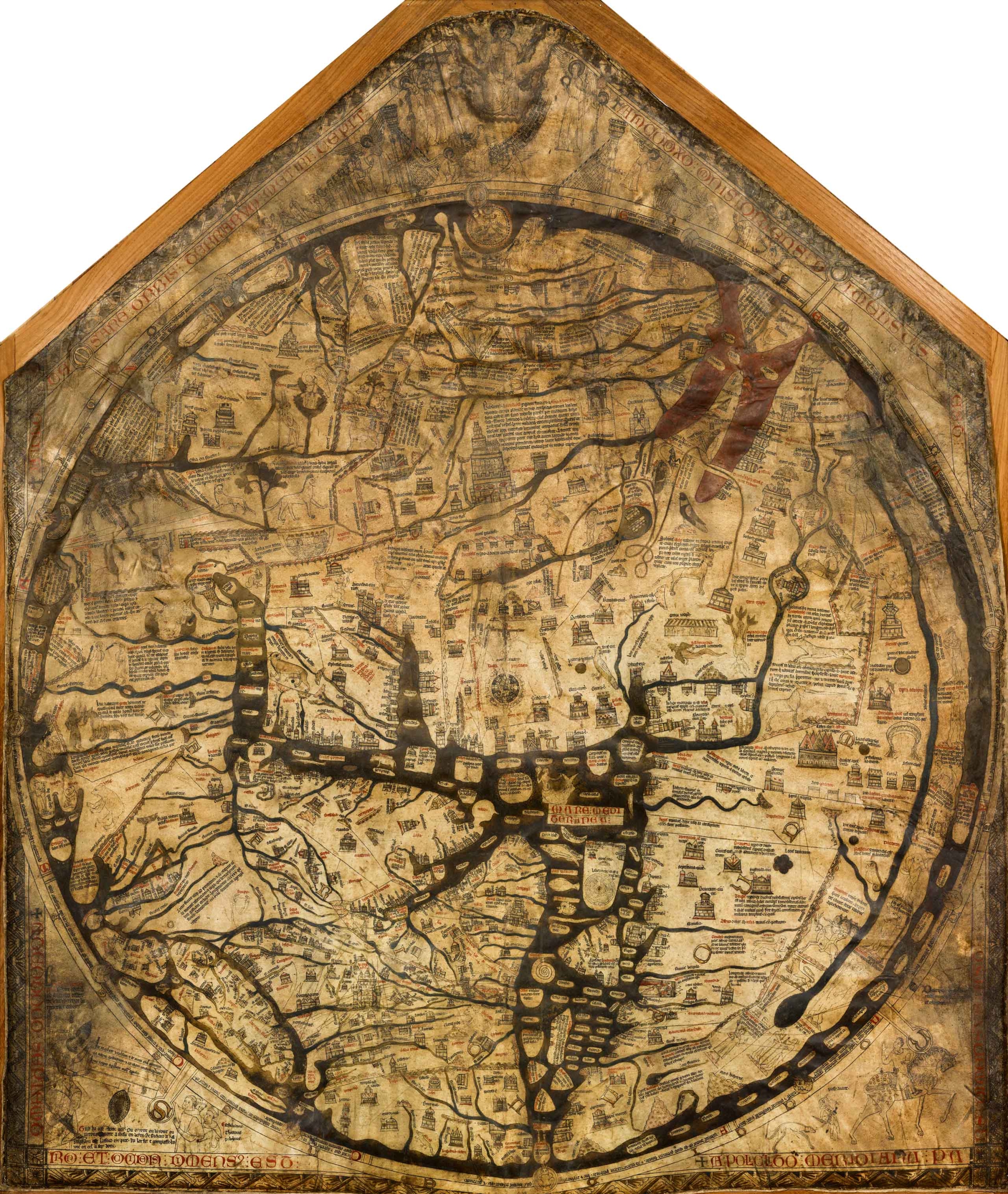 Amongst some fifty-five strange races depicted on the extraordinary Mappa Mundi are a mythical people described as the Gangines. They appear in India, to the top-left of the map.  A legend reads:

This is a paraphrased extract from the third century writings of Roman geographer Gaius Julius Solinus. In his Collectanea rerum memorabilium or Polyhistor he describes the wonders of the world, including the inhabitants of India. This legend translates as “A people who live near the source of the Ganges live only on the smell of wild apples; if they smell something offensive, they immediately die.” 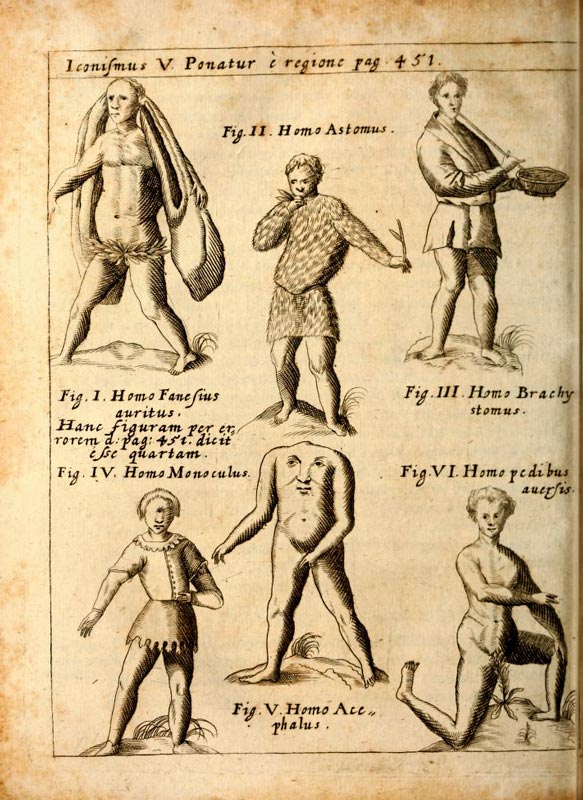 Known as the Astomi tribe in Roman writing, they were more fully described in the Greek Strabo’s Geographica (first published in 7 BC) and by the Roman Pliny the Elder in his Naturalis historia in the first century. Both, in turn, drew on the Greek Megasthenes, an emissary to India for Alexander the Great.

“a race living on the very confines of India on the east, near the source of the Ganges, the Astomi, who have no mouth; who cover their body, which is all over hairy, with the soft down found upon the leaves of trees; and who live merely by breathing, and the perfume inhaled by the nostrils. They eat nothing and they drink nothing. They require merely a variety of odours of roots and of flowers and of wild apples. The apples they carry with them when they go on a distant journey, that they may always have something to smell. Too strong an odour would readily kill them” 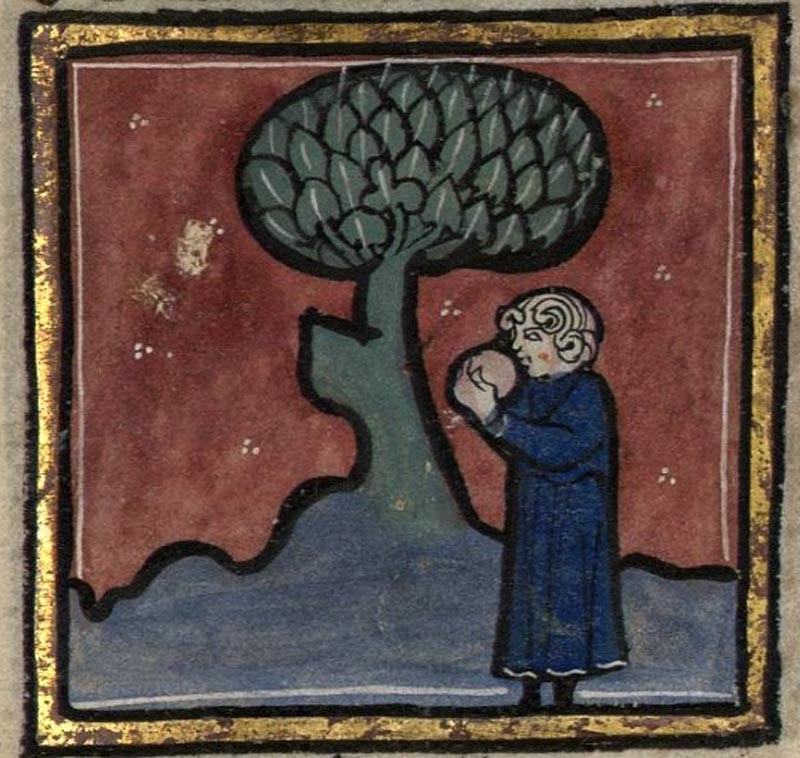 The Mappa shows a drawing of two long-robed, red-girdled figures wearing caps, busy gathering the fruit from a tree. One person appears to be shaking an overhanging branch with a stick, the other apparently stooping to pick up the fruit with one hand and sniffing a fruit in his other hand.

It is unclear why these Apple-sniffers are labelled as Gangines on the Mappa Mundi. It may be that Richard of Holdingham simply made up a new word to describe people thought to live by the River Ganges, or confused names of another Indian people, the warlike Gangarides.

A sacred river to the Hindus, the Ganges rises in the Himalayas in North India, from whence came stories of Himalayan tribesmen who carried fruit and root vegetables the smell of which would combat altitude-sickness. It has been speculated that the mythical Gangines might be based upon ancient Indian accounts, perhaps of such people who kept alive by smelling. Even from the seventeenth century, accounts of travellers attributed altitude sickness to “poisoned wind” from vegetation or soil, and advocated eating or smelling particularly onions, but also dried apples, apricots, and garlic to assist breathing when crossing the Himalayas. 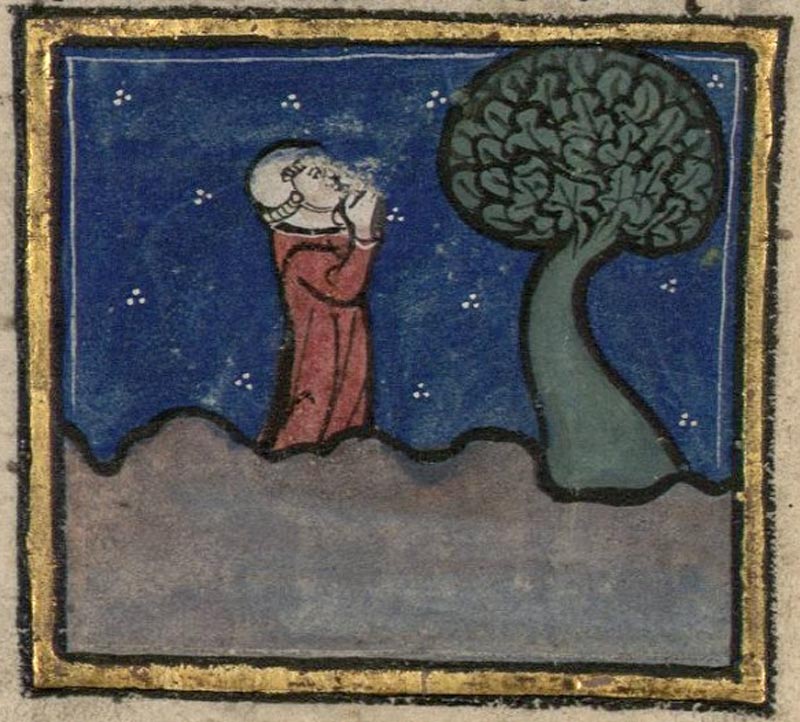 The Apple-sniffers are generally described as mouthless, according to Strabo “having instead of mouths orifices through which they breathe”. By implication lacking speech, this emphasises their alien nature.

And what is the significance of these mouthless mythical people? According to the thirteenth century Dominican writer Thomas of Cantimpré, “those who humbly hear the sermon of the religious live by God’s Word, just as the Indian lives by eating apples. However, whoever only smells the apple neglects good works along with penance and submits to the Devil with all of his wickedness, by which he is never fed the Fruit of Life.” 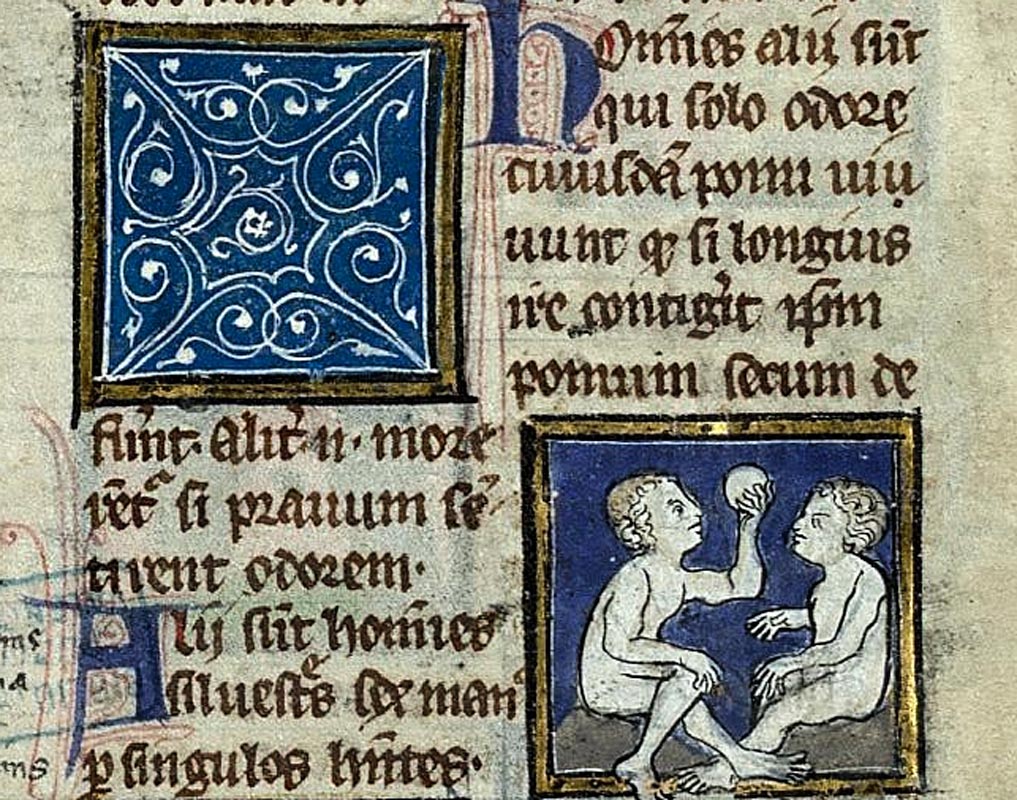 Hereford Cathedral’s Mappa Mundi is perhaps the outstanding representation of medieval understanding of the marvels of the world. Through English eyes, it amalgamates the familiar with the exotic and alien of the eastern world, like the Gangines, the Apple-sniffers of India. 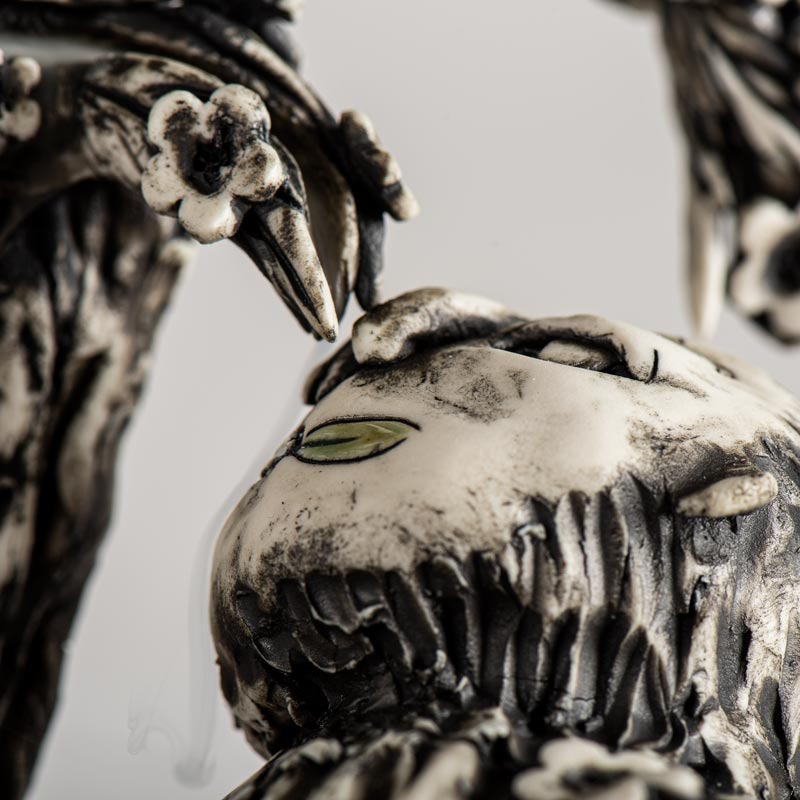 Apples & People commissioned Lucy Baxendale to make a ceramic sculpture based upon the story of the Gangines on the Mappa Mundi.

Lucy is a Herefordshire-based ceramicist and illustrator, and her creative process starts with free-flowing pen and ink drawings to express her subconscious. This artistic approach, described as surrealist automatism, was used by the likes of Miro and Dali. Lucy then translates these drawings to 3D porcelain imaginary structures that bring her subconscious to life. 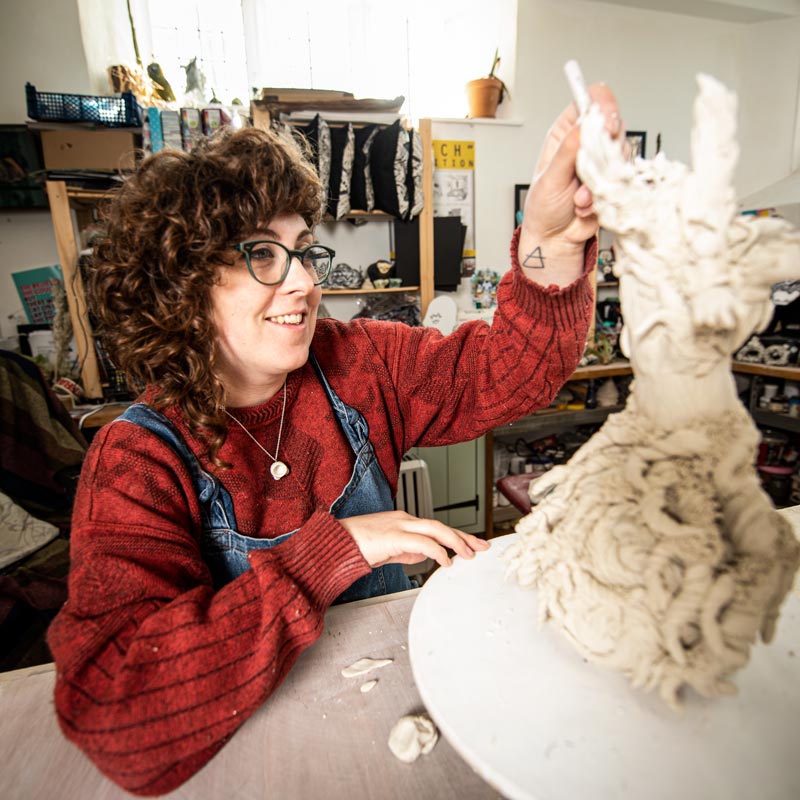 Her objective was to bring the Gangine to life in the sculpture by incorporating smell.

“Scent is such an integral part of their story”

After sculpting, the piece went through its first firing up to 1,000 degrees. Once cooled, it was stained, and then sponged and sanded back to regain the black and white contrast.

“The last thing I did was add the ash glaze onto the moss. I made this using the ash from apple wood collected from a Herefordshire orchard, which was mixed with flint, cornish stone, copper carbonate & iron oxide.”

This was the second piece she created to the brief, not feeling completely satisfied with the first.

“I thought that because there are apple incense cones, and an apple ash glaze, it might be a bit too literal to have apples hanging from the tree, so decided to focus the sculpture on smelling blossom.” 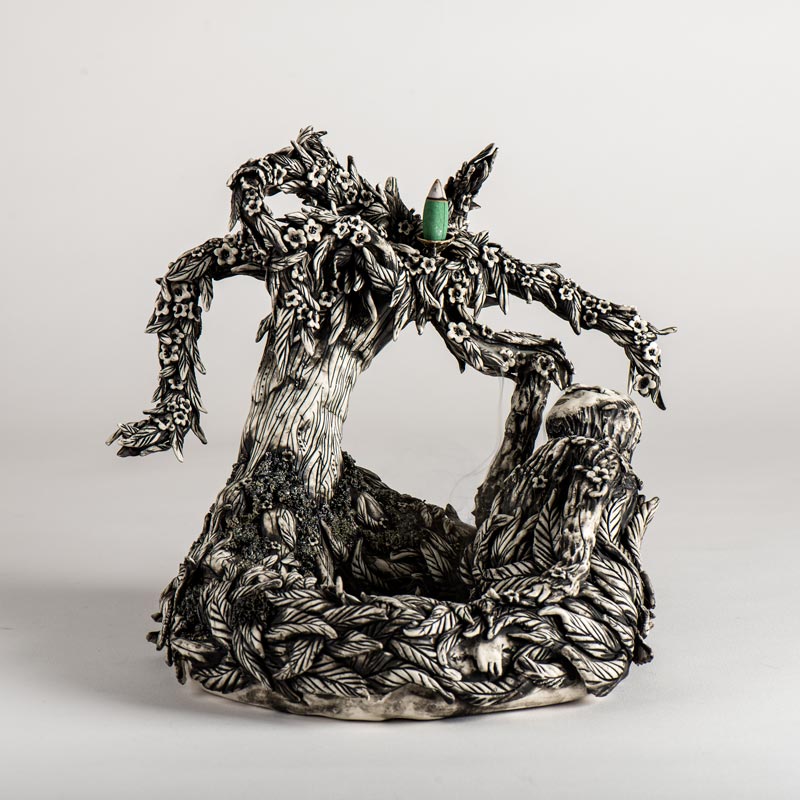 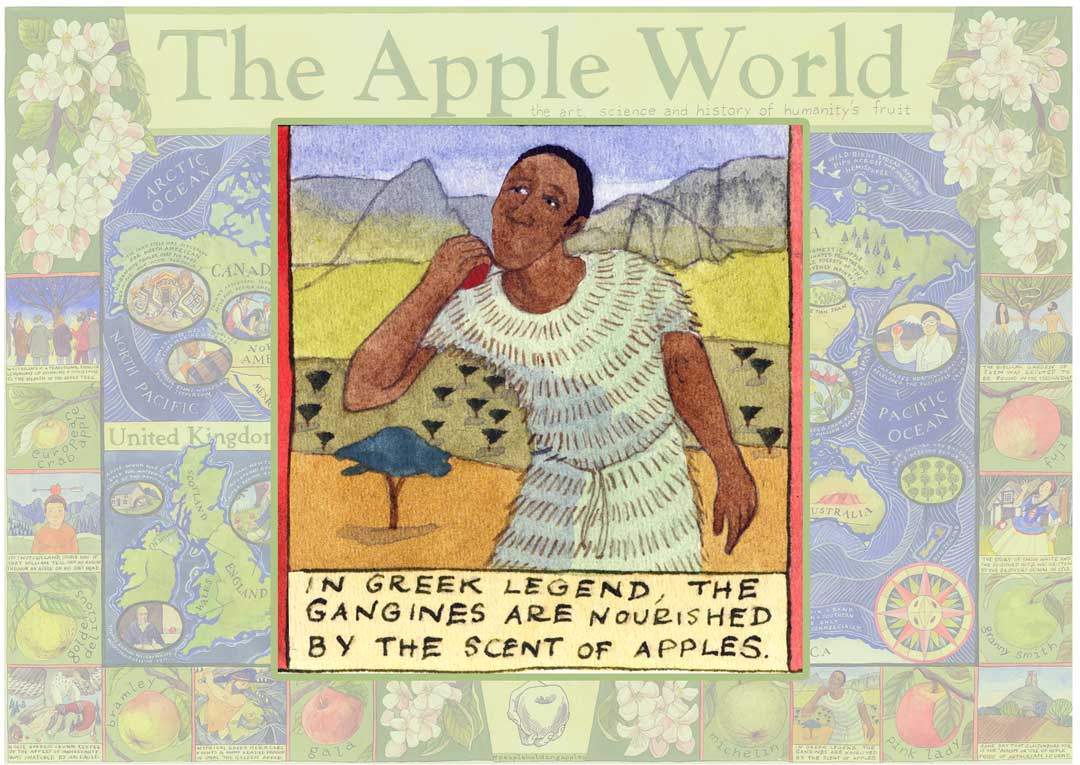