From Ancient Greece to Herefordshire today, orchards are treasured places 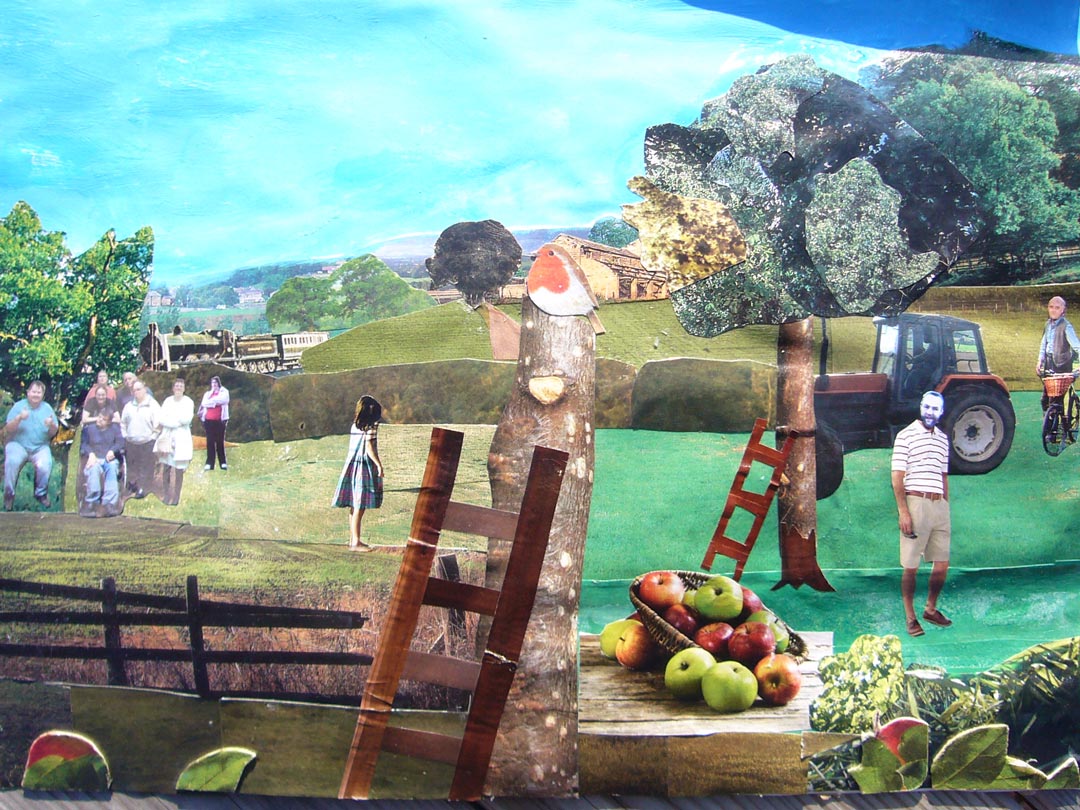 ECHO’s Orchard: A collage made by a group from ECHO of themselves in an orchard. ECHO is a registered charity providing opportunities for adults with learning disabilities in Herefordshire. Frontispiece for Natural England Commissioned Report 090 2012

An orchard has been defined as at least five fruit-bearing trees growing together in a land parcel – perhaps alluding to each one of our senses that are brought alive by it. Ten years ago, on 4th May 2012, Natural England published a 280-page report into what orchards really mean to places and their people. It was based on work carried out over the previous six years by the Brightspace Foundation and their collaborators and was probably the first time that a total assessment of the economic, biodiversity, resource protection and social values of orchards had ever been conducted.

Here, one of the report’s authors, Dr James Taplin, describes the process and its legacy:

“That this report was needed at all is a sad indictment of how far our modern civilization has strayed from the roots which support us. At the time, I was working for a wonderful sustainable development charity, putting my environmental economics degree to good use by helping companies see the full costs of their operations – trying to put environmental activities on an even footing in the boardroom with economic ones by placing a price on them so that they could be factored into traditional financial decision-making. There are many who, with some justification, would argue that this couldn’t, and shouldn’t, be done – that the environment cannot be converted into a line item in a financial ledger and traded off in the books against other business activity. I sympathise and agree with that view, but the ridiculous position we were in then, and still are in many ways, is that if something didn’t have a numerical value next to it, business assumed it had no value at all – what Al Gore described as “partial blindness in the way that we account” – so even a woefully inadequate number was better than no number at all.

As undesirable as it might be, it is nevertheless possible to put some numbers on the environmental impacts of a resource because the attributes being measured (often tonnes of carbon sequestered, number of species, etc.) are themselves numerical, and conversion factors can be used to give them a financial value. Social values, on the other hand, are a different matter. How do you measure the value of a view, or the feeling of dappled sunlight on your face on a warm day under a blossom-laden tree with the somniferous drone of bees in the background? How do you go about trying to put a number on what heritage and history means to people? 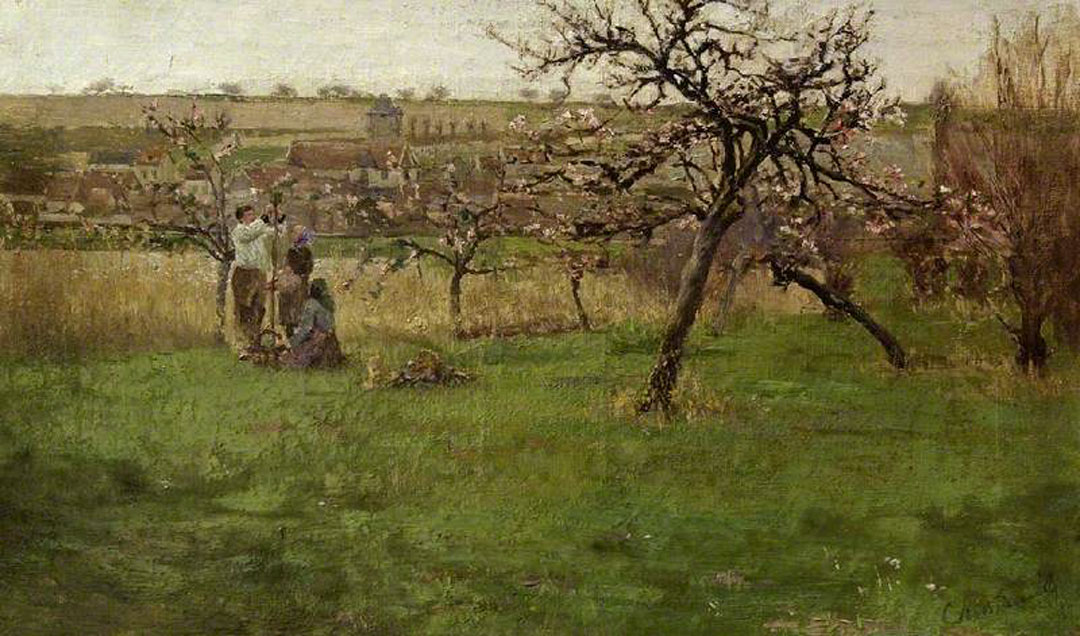 These things are not absolute. There is no easily-measurable number attached to them, and as a result they are even less likely to be considered in standard decision making. These were some of the challenges that we were facing, and which we wanted to address in the work ten years ago.

Growing up, I was obsessed by Greek mythology. I would spend hours with my book of Greek Myths and Legends, but my absolute favourite hero was Odysseus, and I must have read and reread my copy of the Odyssey twenty or more times. It is in the Odyssey that we find the first mention in literature of a deliberately planted orchard (when Odysseus visits the walled garden of King Alcinous), but my chief interest was less about his adventures en route, and a lot more about what it felt like to come back home. It was the yearning to be in the place where he belongs that resonated most with me. His love for Ithaca, and the tragic injustice of finding it despoiled by the selfish suitors after the hard decades away. His identity bound up with his land and what grows there. When he finally defeats the suitors, he goes to find his father Laertes who, overcome with grief at the loss of his son, has returned to the stability of the land as well – tending his garden and his fruit trees. 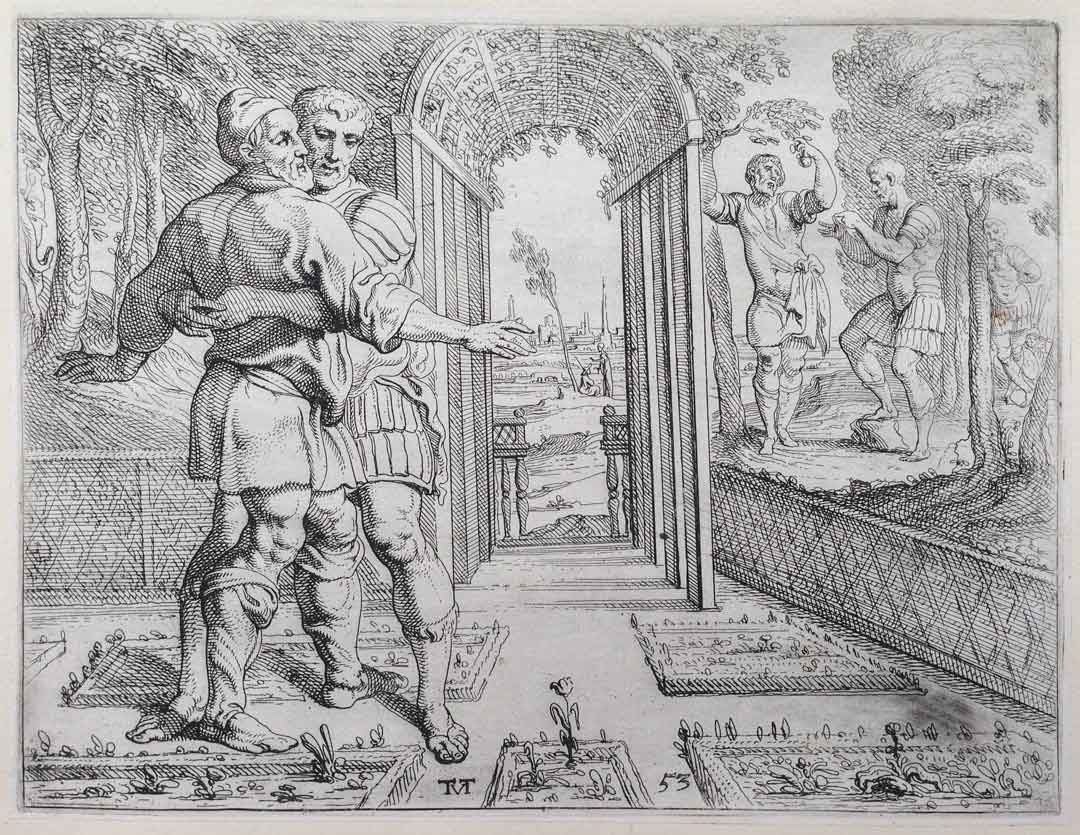 And for his part, when he finally reveals himself, Odysseus also uses a memory of a connection to the land to help prove who he is: “Through these very trees we were going, and thou didst tell me the names of each of them. Pear-trees thirteen thou gavest me and ten apple-trees and figs two-score, and, as we went, thou didst name the fifty rows of vines thou wouldest give me . . . “

Maybe, as we grow up we can become blasé about the world around us, or cut off, but reading about Odysseus as a child who also travelled a lot with his father’s work, to me it felt entirely natural to be fiercely connected to the physical world around you, to know its contours and its secret places, to be shaped and moulded by the views and vistas, for what you looked out on to define your outlook. Exploring this formally was an important part of the purpose of the Natural England study as well. We wanted to examine what sentient humans through the ages have always known – that places (orchards in this case) have more value than just the price of what can be extracted and sold from them – and to try and express that in terms that business might finally understand. 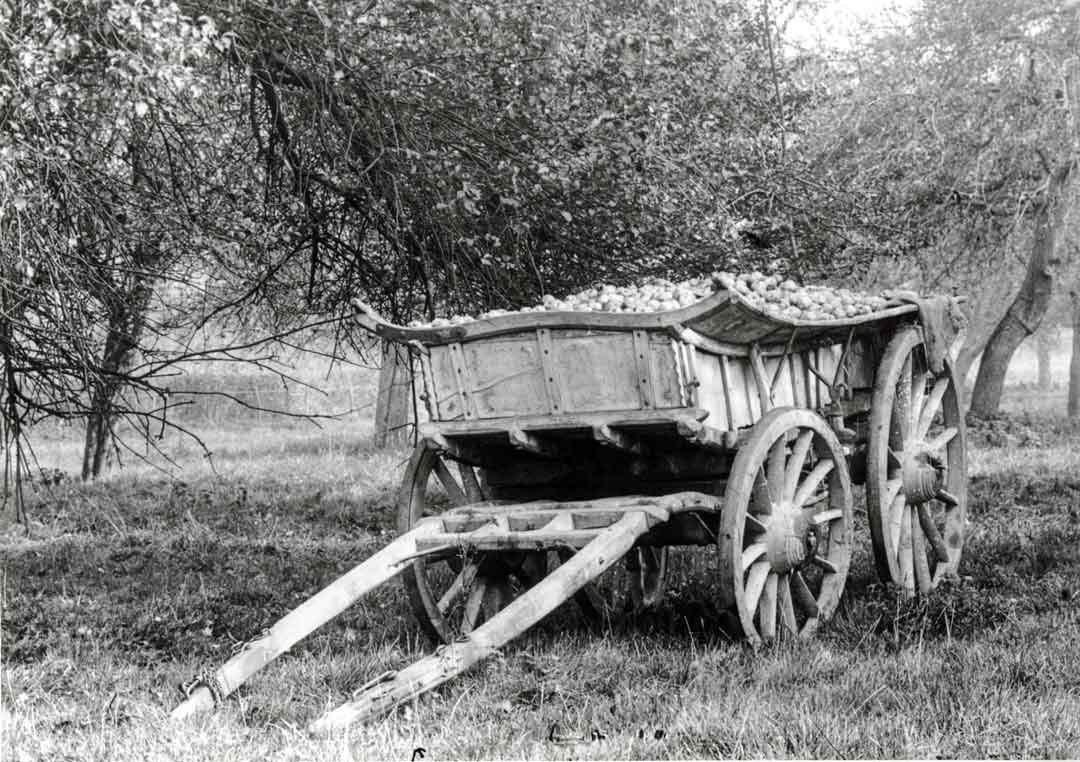 The full report can be read online and so I’m not going to go into it in detail, but it was a rigorous study involving six different Herefordshire orchards: a mixture of large and small, accessible and not, traditional and intensive. We looked at three primary economic values: profitability, a local economic multiplier reflecting the value of spending in the local economy, and a share of tourism value. We also looked at three environmental values: biodiversity value, climate regulation value (related to carbon sequestration), and soil quality value. Each of these six values was assessed with robust and proven valuation techniques, and with established measures of impact value (for instance the value of a tonne of Carbon Dioxide equivalent sequestered at the time, according to official government figures, was £50). So far, so standard, but having looked at the more easily measurable economic and environmental impacts, we also ran postal surveys and workshops with residents local to each orchard to get an idea of what they meant to them – both positive and negative – and how we could put a value on those impacts using ranking. 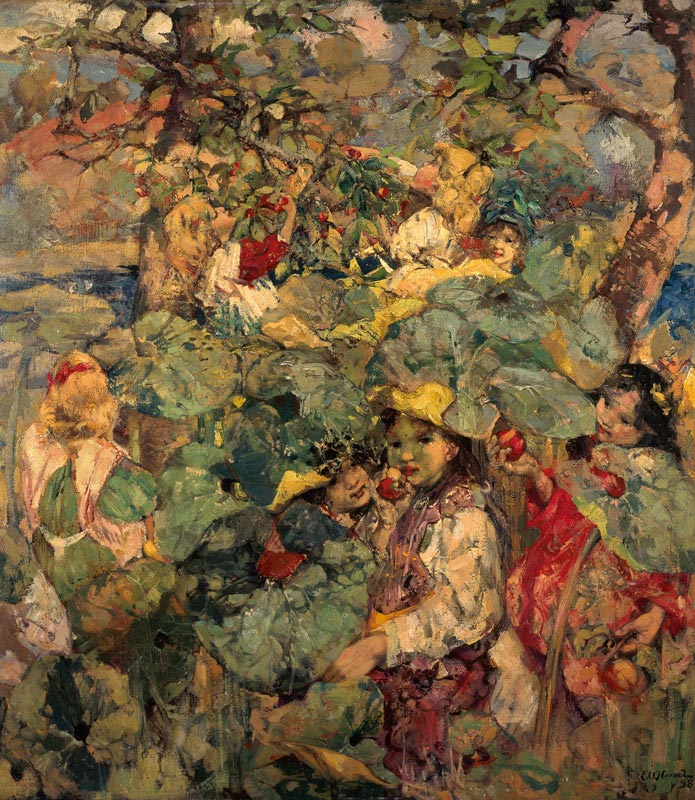 As you might expect, what we found was that orchards mean a lot to people, and they don’t just view them through rose-tinted glasses. They see them as active parts of their everyday lives – shaping who they are and the way they live. They enjoy them for the peace that they bring, for the views and beauty they provide, and for the routes to the wild that they open. They enjoy them for exercise, for education, and for just being there. When we looked at what these things meant to people in financial terms, we found that social values were significant, and were frequently greater than the total economic value – only part of which (profitability) is usually considered in standard business decision making.

There is, of course, a big difference between proving a theoretical value, and achieving a real one. And in a world of exclusive private ownership it is easy to understand why decisions are only made on the parts of value that the owner of the resource sees – typically the economic values that flow from it. These wider environmental and social benefits are all very well, goes the theory, but they are free benefits granted by the owner to others, and unless those others are willing to actually pay for them somehow, then they don’t really exist at all. Not in monetary terms at least. Orchards continue to be grubbed up – indeed one of the six orchards studied for the report no longer stands.

What the Natural England commissioned report did not do, therefore, was put a definitive value on an orchard. Instead, it offered insights into the wider importance of an orchard to the world and its people around it, and ideas about how that importance might be considered in traditional economic thinking. Pete Brown has described the report as “a brilliant piece of work. We live in a bone-headed, short-sighted culture…” where monetary values are all that matter.” 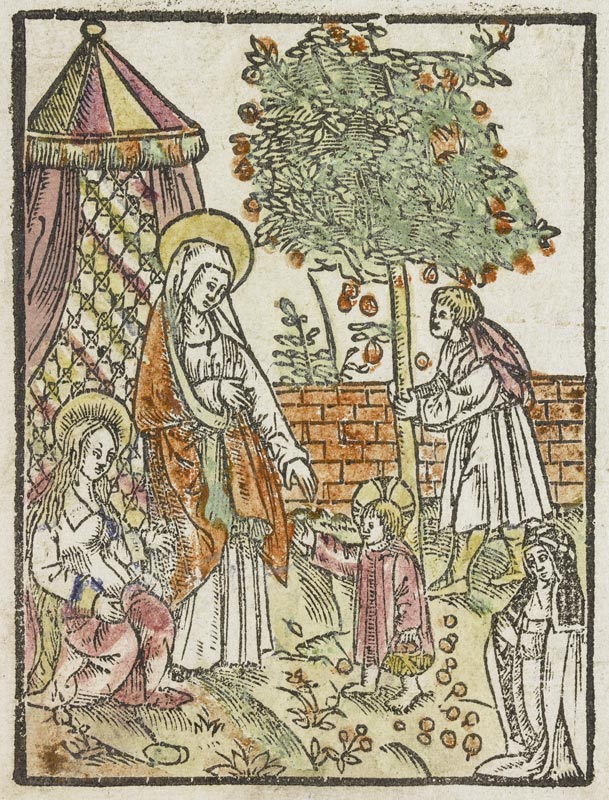 “The cider industry was closely involved with the study, having always recognised that our beautiful cider apple orchards add a value to our rural counties that up until this point had been impossible to quantify. The wonderful backdrop of acres of orchards in blossom in the spring, the smell of ripe apples and the rich orchard colours adding to the autumn landscape mean a huge amount to those lucky enough to live nearby and the many visitors the orchards attract, adding further value to our rural economies. The depth of the study, the innovative ways that value was quantified, and the robustness of the final results were exactly what was needed to support the industry position that cider apple orchards are worth protecting and nurturing for the long term. Our orchards are a cause for celebration, they make people smile, they add value to communities and this study went further than ever before in terms of measuring the full value that they bring to local communities.”

The increase in community orchards shows that local people recognise the value of orchards and will work hard to maintain the space for its amenity value. However, farmers need to earn a return from their land, and orchards are long term assets that serve what can be short term consumer market demand for their fruit. What experience of the last decade has shown is that, however fulsome the research, however the worth of orchards is expressed in their impact on landscape, environmental protection, or amenity, much more needs to be done by governments and communities to incentivise farmers to manage their orchards for the multiple services that their orchards provide, incremental to their fruit, and the additional work required to maintain older orchards in a productive state. Only then will our orchards have long term protection throughout the natural life of their fruit trees.

“What the Natural England commissioned report showed is that that bit of an orchard that slides sterile onto a balance sheet is no more than a sliver of what it’s worth to its human neighbours when given a chance to think about it rationally and, like Odysseus yearning for home, or Laertes finding sanctuary amongst his trees, on emotional and spiritual levels it may well be priceless.” 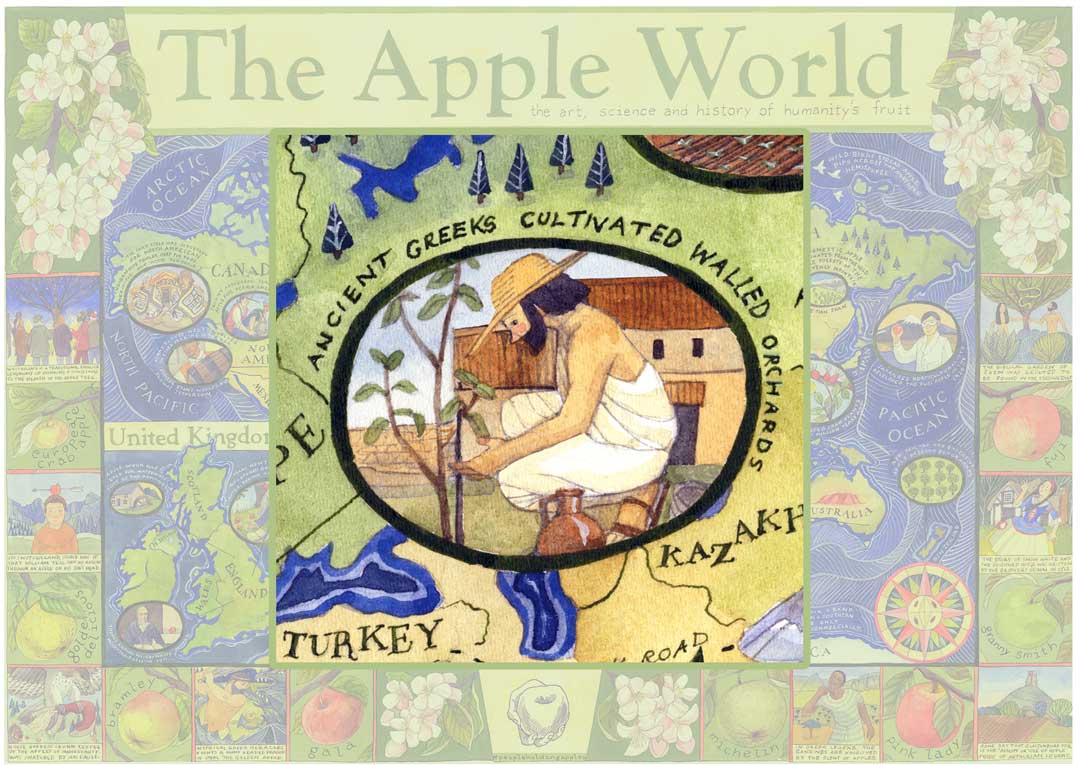