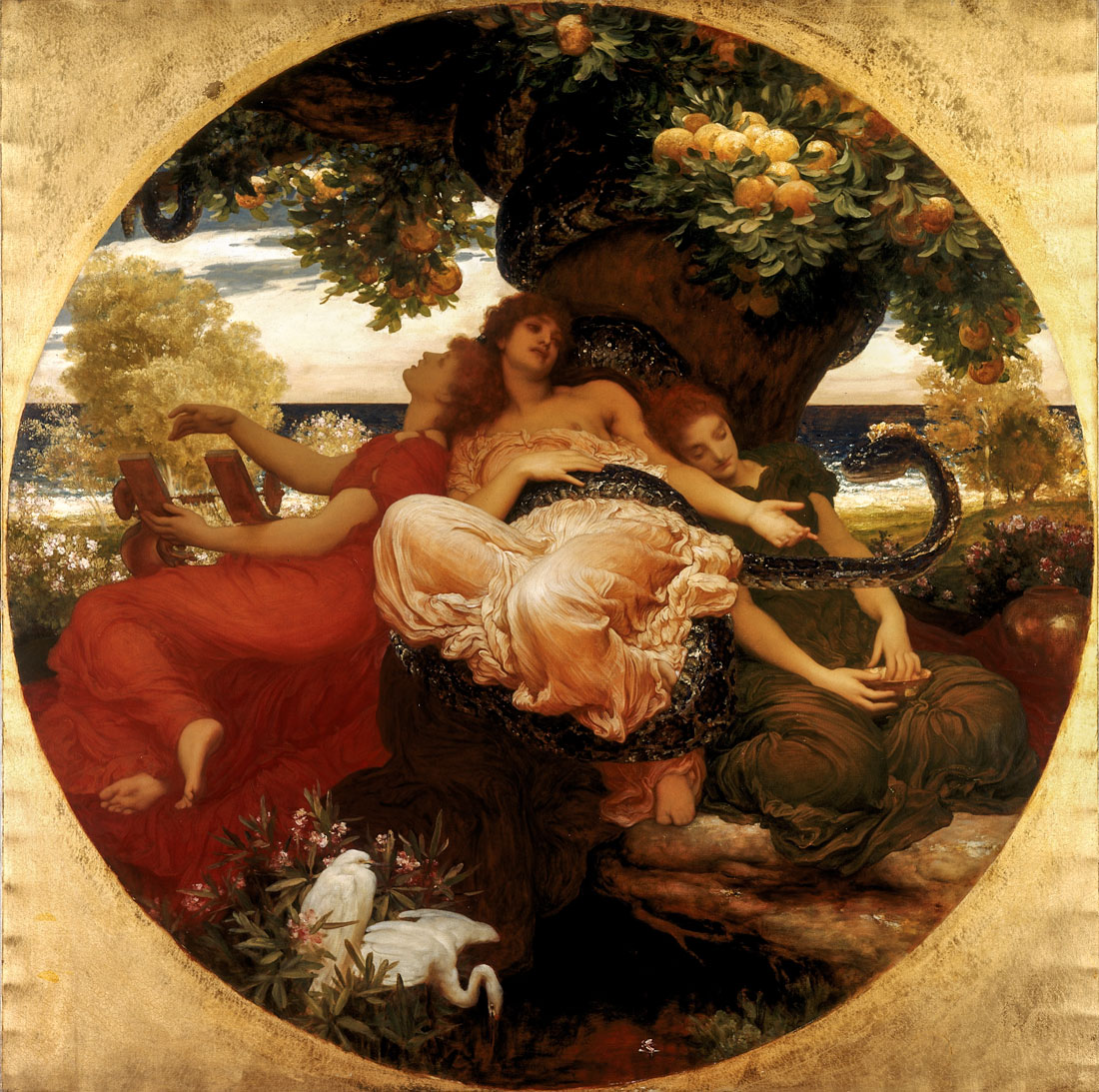 Golden apples crop up a lot in the history of art. Most often their significance begins with their symbolic function in the stories of Greek myth. Once in the hands of artists, these golden apples take on a mutability which sometimes shifts these narratives and creates new symbolic meaning along the way.

In ancient Greek mythology, the Garden of the Hesperides is where the tree of immortal golden apples grows. The three daughters of Hesperus, the evening star, tend to the tree under the orders of the goddess Hera while the apples are guarded by an attendant dragon, Ladon. Heracles is set the ultimate heroic challenge of stealing these life-giving apples as one of his Twelve Labours. Artistic representations of how Heracles achieves this vary. Some versions depict a fierce battle between Heracles and the dragon, while others depict Heracles being fed apples by the Hesperides.

In his epic painting first exhibited in the Royal Academy’s 1892 Summer Exhibition, the Victorian artist Frederic Lord Leighton depicts the maidens resting languorously by the tree, the central figure entwined in the dragon’s coils. Music is suggested to also encircle the tree as one of the three Hesperides is depicted holding a lyre – something backed up by contemporary sources which claimed Leighton found inspiration in the following lines from Milton’s Comus:

“All amid the Gardens fair
Of Hesperus and his daughters three
That sing about the golden tree.”

The solidity and three-dimensionality of his final painting owes a great deal to his process of working up a preparatory drawing (or cartoon) and a sculptural maquette (models were posed with real wet drapery) before beginning his final painting. 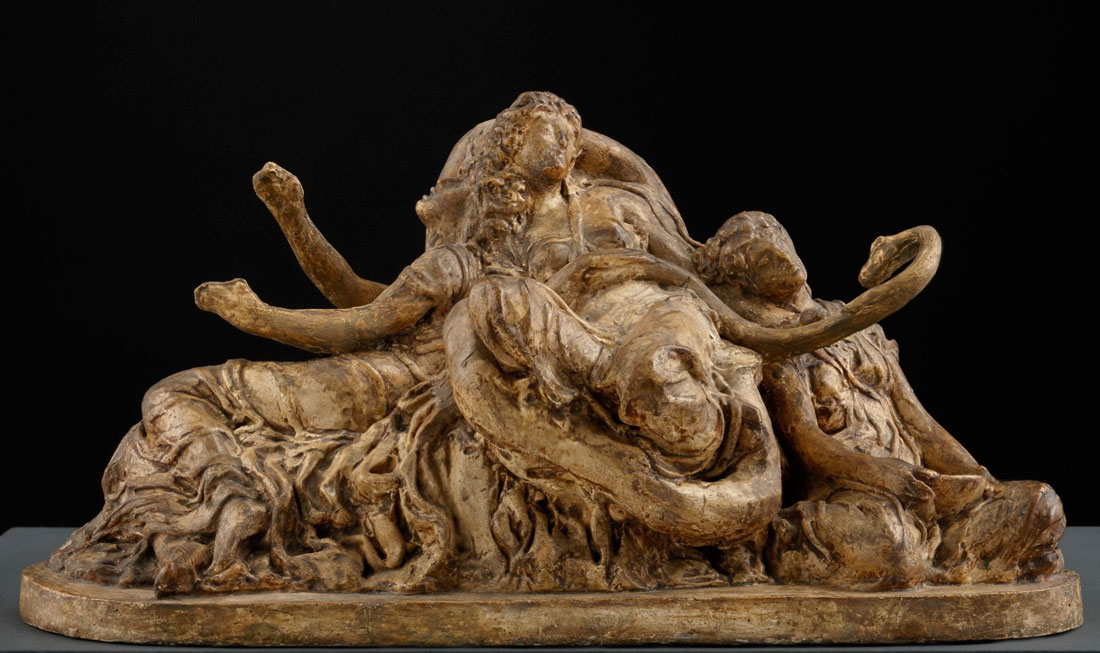 Edward Calvert’s depiction of the Hesperides instead concentrates on a dance around the golden tree which resembles a classical frieze and has a definite nod to the work of William Blake and his inclusion in a group of artists known as ‘The Ancients’. 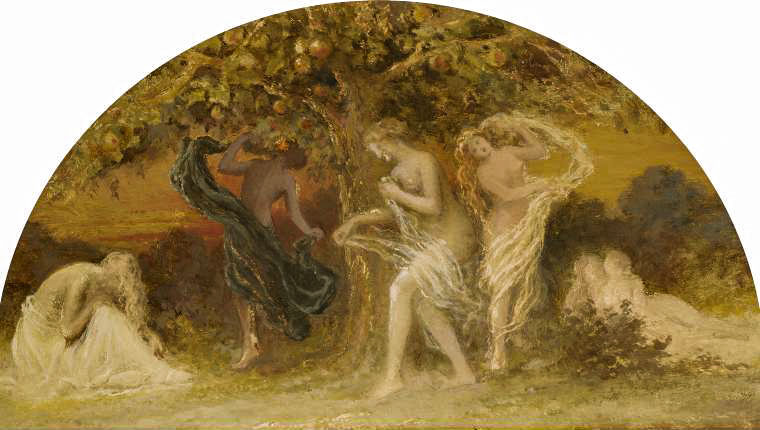 Turner on the other hand depicts Hesperides as a peaceful classical landscape aside from the towering rocky outcrop where the dragon Ladon lies in wait. In the protected valley Eris, goddess of discord, is seen taking one of the golden apples. This is the act which begins the events leading to the Judgement of Paris and the Trojan War. 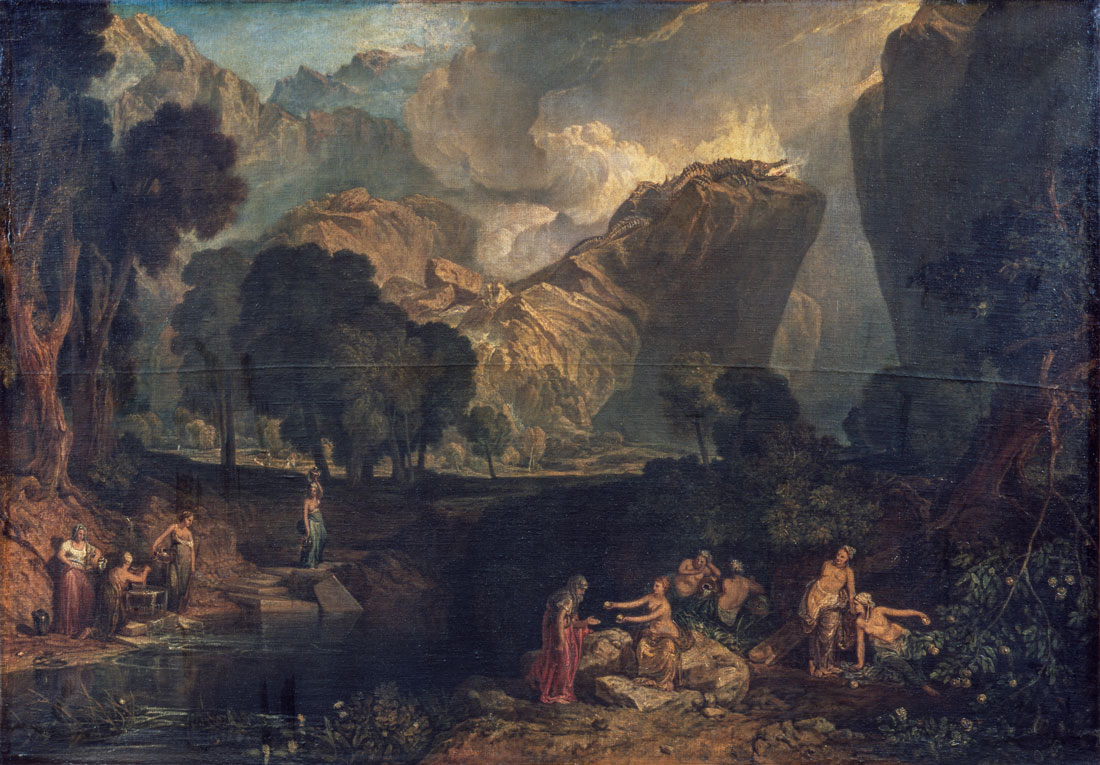 Peter Paul Rubens picks up the golden apple with his depiction of The Judgement of Paris based on the version of events by Roman poet Lucian. Feeling snubbed by not receiving an invitation to an important wedding feast, Eris throws a golden apple inscribed ‘To the Fairest’ among the attendant goddesses. Minerva, Juno and Venus all claim the apple so Jupiter tasks Paris to choose between them.

Rubens sets this beauty contest in a rural, idyllic landscape and chooses to depict the moment when Paris appears to be offering the apple to a somewhat bashful looking Venus. The goddesses are all captured in various states of persuasive undress. Additionally they offered bribes to secure the apple – with Juno offering wealth and power, Minerva – wisdom and strength and Venus promising Paris the most beautiful woman in the world, Helen, who was married to King Menelaus of Sparta – a gift which proved irresistible. The consequences of this action are foretold in the sky where Alecto (one of the three Furies) is seen blowing up into a jealous rage.

Rubens also shows his skill at capturing different textures in paint. As well as the golden glow of the apple and the fading light of the sun, he contrasts textures of silk, velvet, reflective glass (Minerva’s mirror with the foreboding reflection of Medusa’s head) but also the sheen of hair and skin. 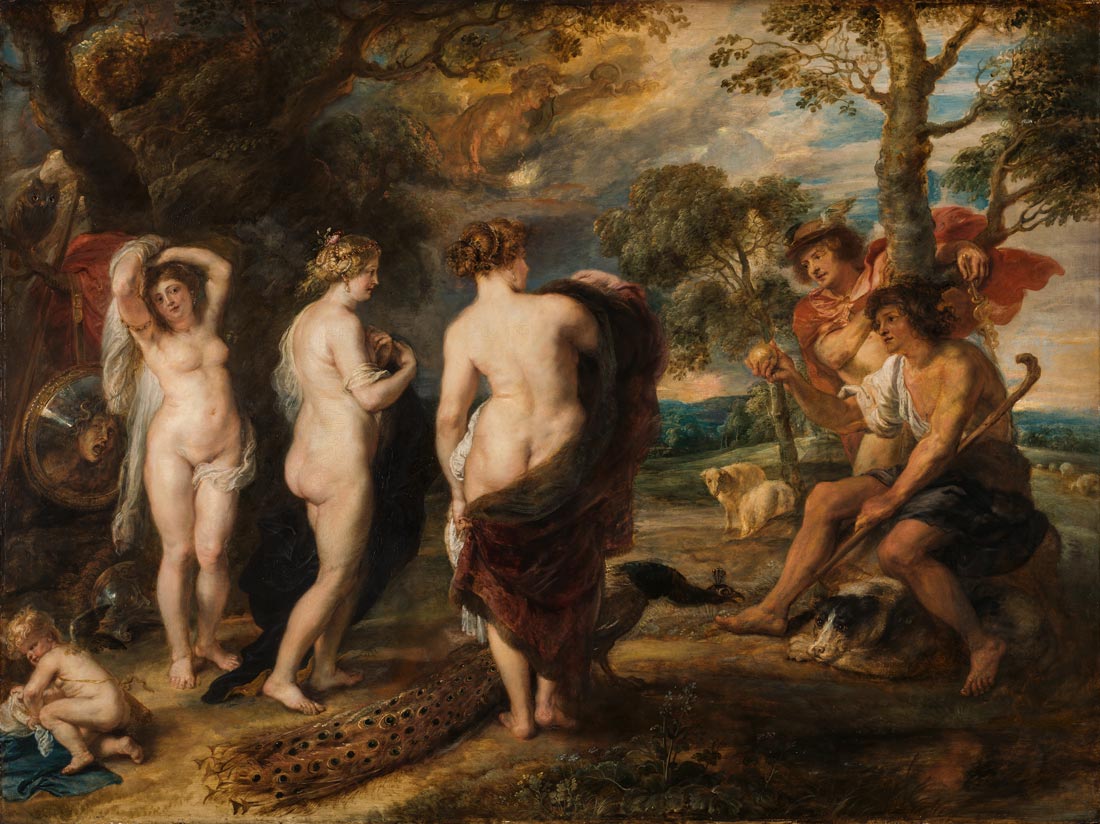 In many ways, golden apples are a symbol of humanity’s traits (both good and bad). They represent power struggles, desire, sin and survival. Fundamentally they divide the realms of the mortal with the immortal.

Garden of Hesperides by Olivia Preye 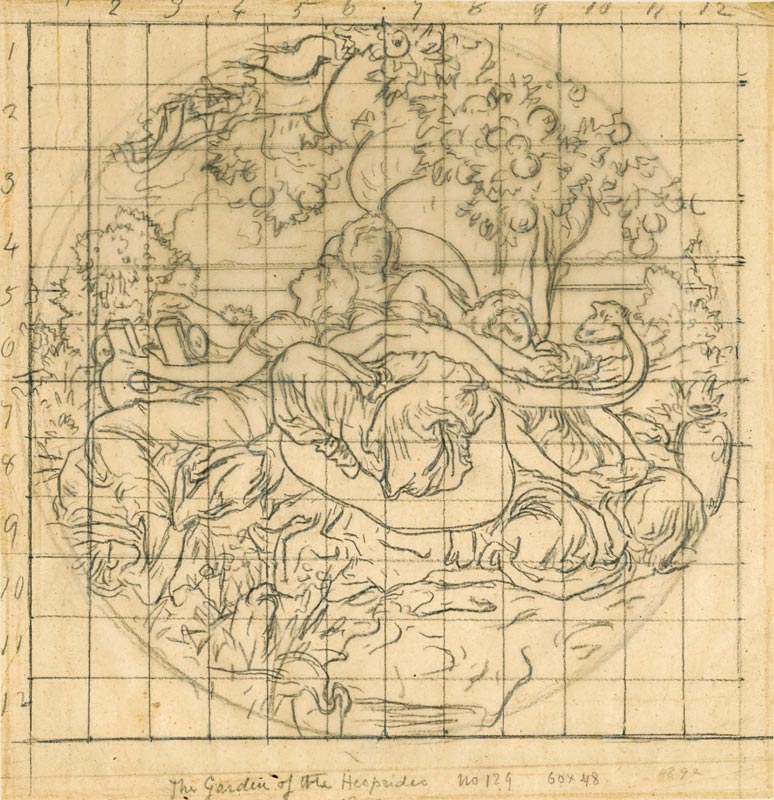 Working over the years as a jazz singer, music therapist and yoga teacher has brought me to develop a practise called Voice Yoga. Through this, I have become interested in the healing effect of sound and how it can bring us out of our thinking brains and more into our feelings. For this reason, I chose not to articulate the lyrics with much precision. I saw the words more as inspiration for sounds with the purpose of bringing the listener into a meditative state. The sound world reflects the serenity of the three nymphs, and my aim was to invoke that sense of bliss via the sound textures and harmonies. I made several field recordings around my local lanes to make into accompanying rhythms. I kept these ambiguous so that the sound of grass being torn could also be the crunch of a golden apple… 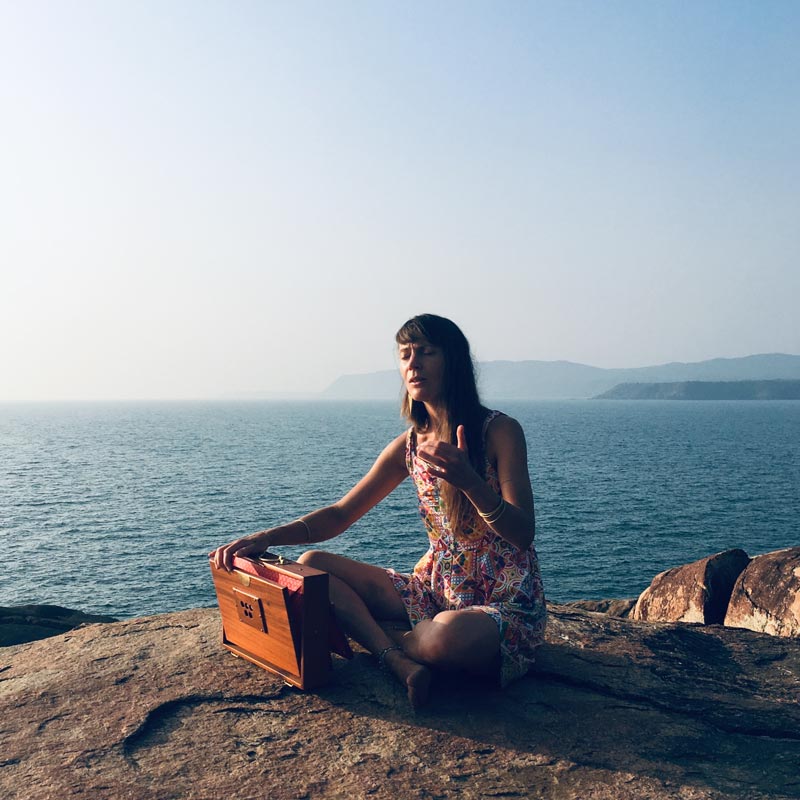 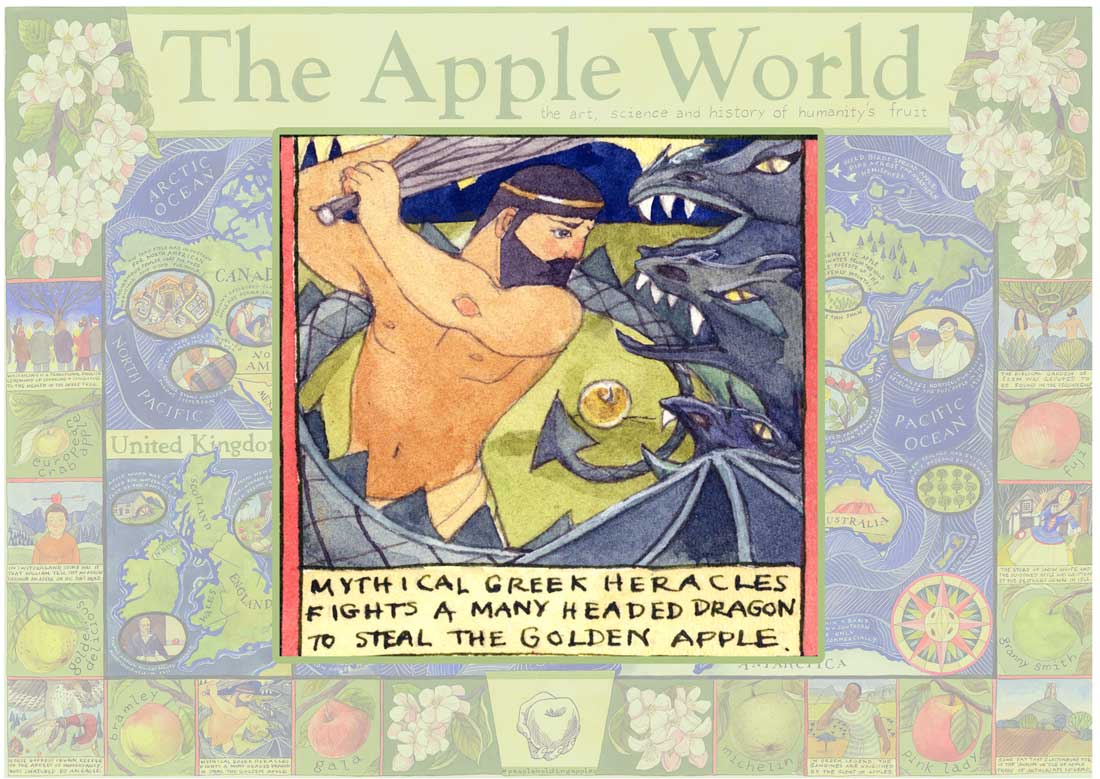 Newton and the Apple Tree