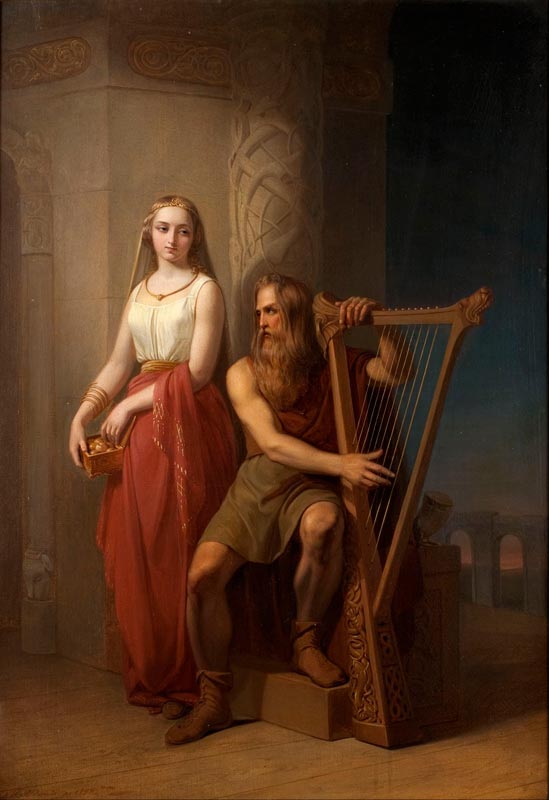 To celebrate National Storytelling Week we are exploring the narrative from Norse mythology of Idun (Iðunn in Old Norse), the goddess of youth and the keeper of the life-giving golden apples. Her name means “giver of eternal youth” and so it was that the Norse gods retained their healthy, young vitality by being given her golden apples. The phrase ‘an apple a day keeps the doctor away’ is thought to originate from the symbolic health-giving properties of the apple in Norse mythology.

The Story of the Golden Apples

According to Norse mythology, the trickster and troublemaker Loki got into a disagreement with the giant Thiazi. To end the fight, he promised to kidnap Idun and give her to Thiazi. Loki lured Idun into the forest, where the giant Thiazi was waiting. He then took her off to Jotunheim, the realm of the giants. 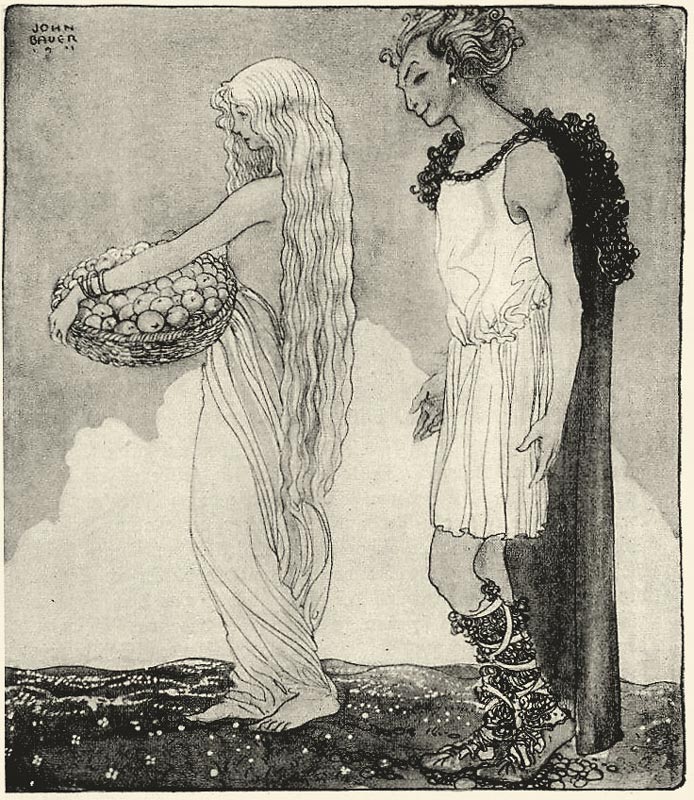 Loki and Idun, 1911 by John Bauer, Illustration from ‘Our Fathers’ Godsaga’ by Viktor Rydberg

Time passed and without the properties of Idun’s apples, the gods quickly began to age and their hair turned grey. When Loki was found to be guilty of taking Idun away, the gods made him choose between paying with his own life or bringing Idun back home to Asgard with her apples.

Loki borrowed Freyja’s magic cloak, which turned him into a falcon and he flew to Jotunheim to reclaim Idun. Once he arrived he transformed Idun and her apples into a nut and flew back to Asgard with the nut in his claws.

When the giant Thiazi, who had been out fishing, came back and saw that Idun was gone, he assumed his eagle form and flew fast to Asgard. When the gods saw Loki in falcon form approaching with the nut in his talons, they went out to the walls of Asgard and piled up a stack of wood shavings. 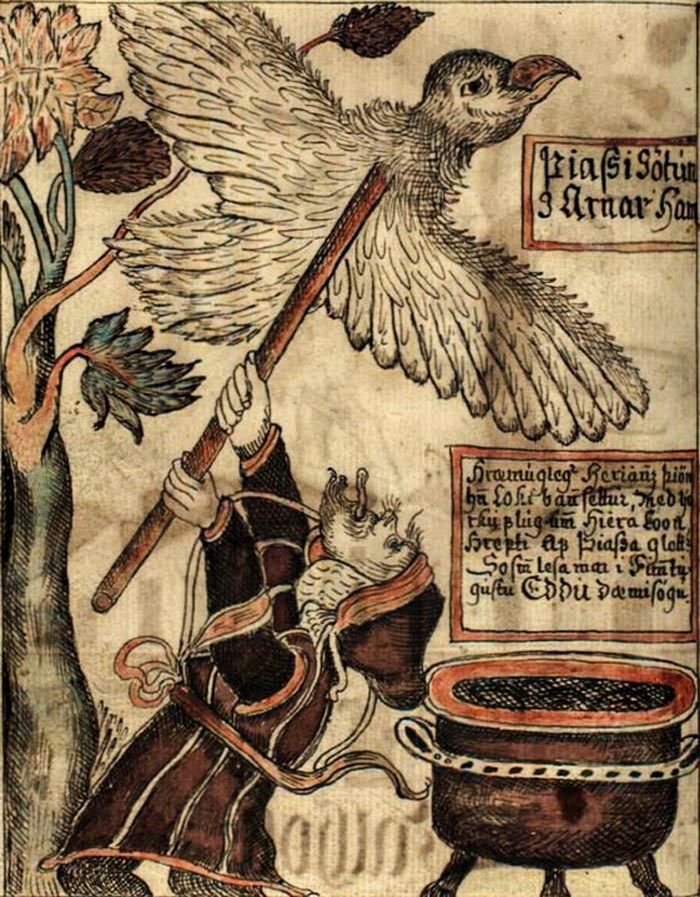 Giant Thjazi in the form of an eagle, from the 18th century Icelandic manuscript “NKS 1867 4to” of Norse mythology, Collection of the Danish Royal Library

As the falcon landed safely inside the walls, the gods set fire to the pile of wood shavings. Thiazi in his eagle form was unable to stop and his feathers caught fire, bringing him crashing to the ground, where the gods killed him.

In Nils Jakob Blommér’s painting of Idun, the youthful goddess is seen alongside her husband Brage – the god of poetry, eloquence and the patron of skalds (old Norse poetry). Idun is also the goddess of spring or rejuvenation among the Norse gods and in Blommér’s painting she is depicted with her apples. In contrast, Brage is represented as an elderly man, with long white hair and beard, and holding the golden harp which he played. Blommér’s best known works were often based on Norse mythology and folklore. He also drew inspiration from Swedish folk songs and the folklore motifs of the Austrian painter Moritz von Schwind. He believed that nature had an inherent soul which could be symbolised by folk characters. 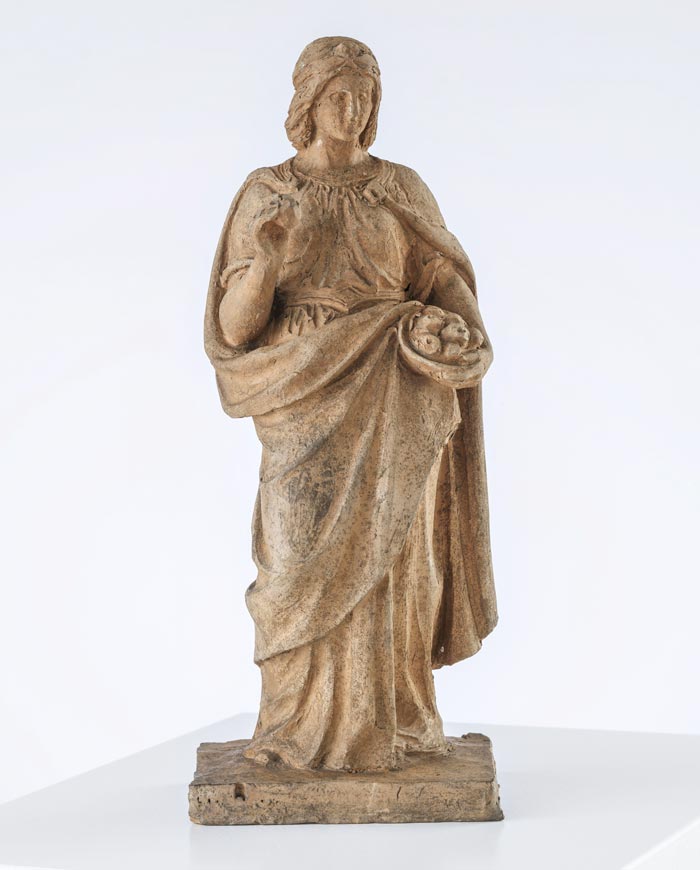 Idun, Keeper of the Apples of Immortality

An Apples & People Commission to coincide with National Storytelling Week

Based in Shropshire, UK, Suzanne Thomas is a storyteller and folklorist, and Jake Thomas a musician. Together, in the ancient Bardic Tradition, Suzanne and Jake blend stories and music to take you to a place where dragons fly, giants comb their beards and other worldly folk dance with mortals cranesfieldbardicarts.co.uk. They were commissioned by Apples & People to tell the story of Idun, Keeper of the Apples of Immortality.

Video of the performance of ‘Idun, Keeper of the Apples of Immortality’ by Suzanne and Jake Thomas commissioned by Apples & People 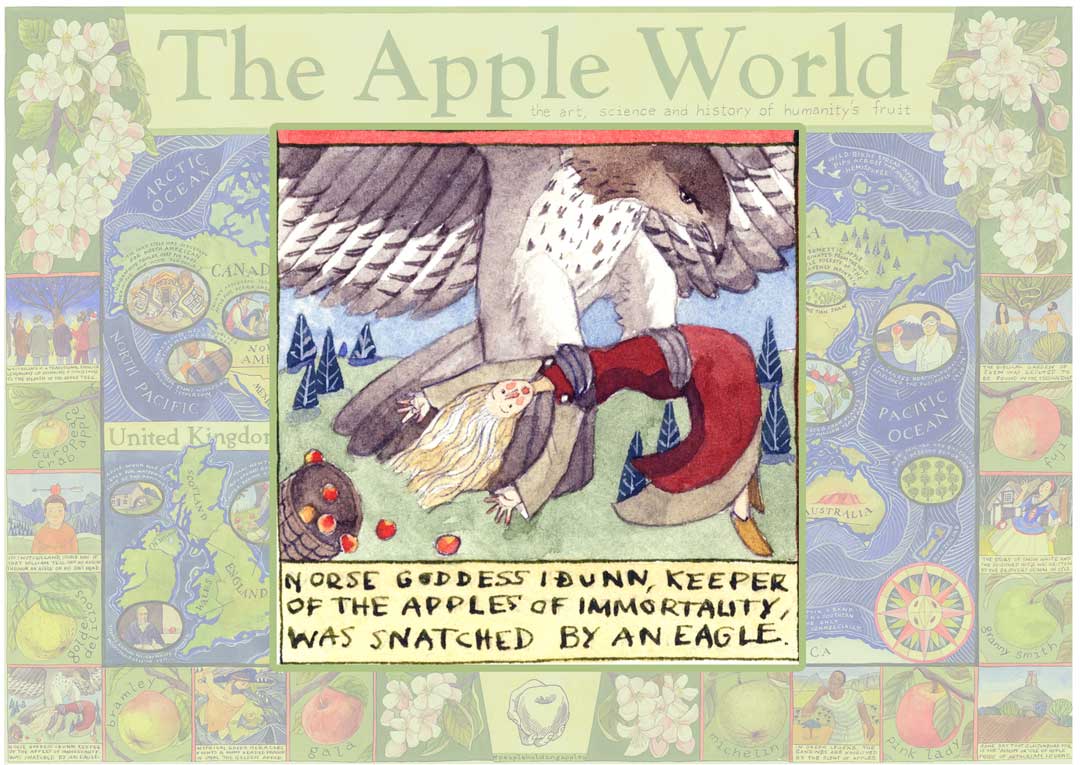 The Royal Gala apple, recalling Her Majesty The Queen’s visits to New Zealand A Royal Apple
Scroll to top