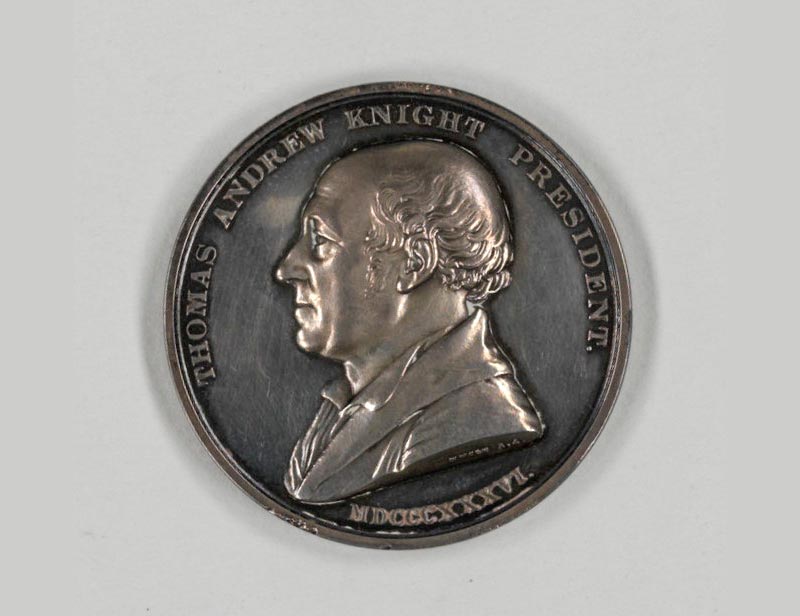 Thomas Andrew Knight (1759-1838) was born into a wealthy Herefordshire family which had made its money from the iron industry in the north of Herefordshire and neighbouring counties. He lived the later part of his life on the family Estate of Downton Castle in Herefordshire, which was passed to him by his brother. On 1 January 1811 Knight was elected second President of what was to become the Royal Horticultural Society in London, having a few years earlier been instrumental in establishing the purpose of the Society as practical scientific endeavour:

“there scarce exists a single species of esculent plant or fruit, which (relative to the use of man) has yet attained its utmost state of perfection; nor any branch of practical Horticulture which is not still susceptible of essential improvement” 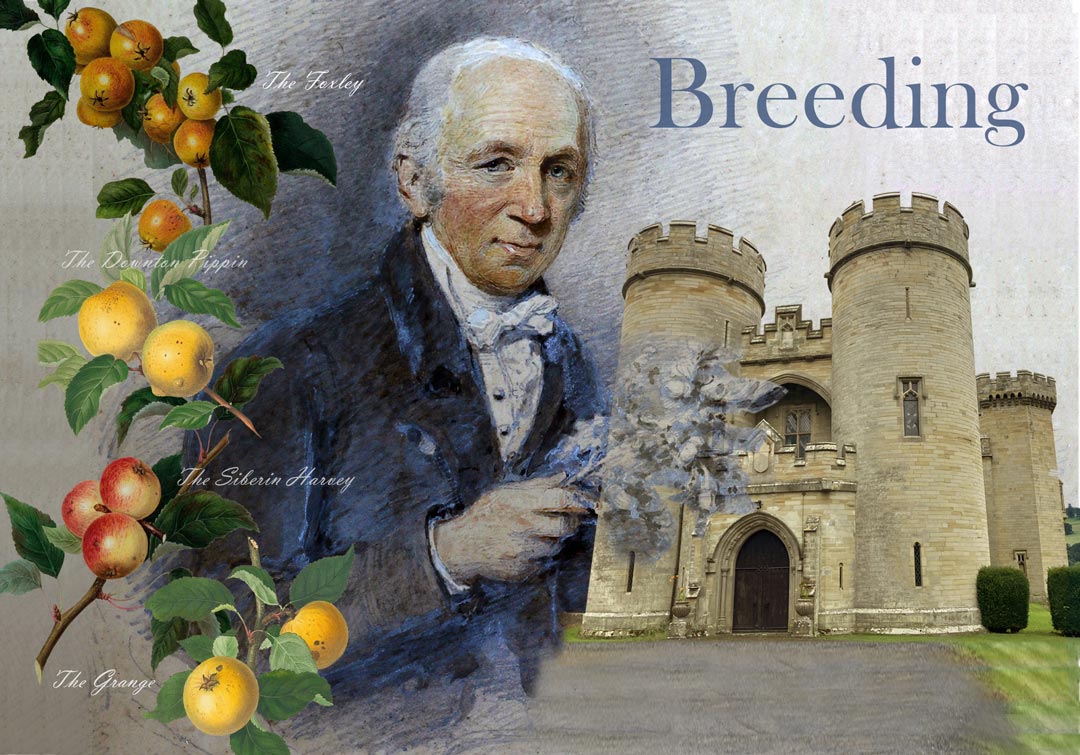 From an early age Knight was fascinated by nature. He came to understand the practical potential of plant hybridisation to enhance fruit quality and productivity, by conscious selection of natural variations. During his lifetime he bred many new varieties of cider and dessert apple using hand pollination. He describes his methods of pollination in detail in his book Pomona Herefordiensis. The results, often named after places in Herefordshire, include the apples The Grange, Downton Pippin, Red Ingestrie, Yellow Ingestrie, Breinton Seedling, Bringewood Pippin, Wormsley Pippin, Yellow Siberian, Foxley Apple, Siberian Harvey, Spring Grove Codling, and Herefordshire Gilliflower.

Knight appears to have been one of the first to record the use of controlled pollination, producing new varieties of apple by crossing existing cultivars and selecting the best from resulting progeny. His successes were the result of painstaking work. For example, he recounts that the Siberian Harvey, which produces a sweet juice of high specific gravity that will likely produce a rich cider, was one of just three or four apples from three hundred crosses that showed any merit.

“seedling plants…, of every cultivated species, sport in endless variety. By selection from these therefore we can only hope for success in our pursuit of new and improved varieties of each species of plant or fruit…” 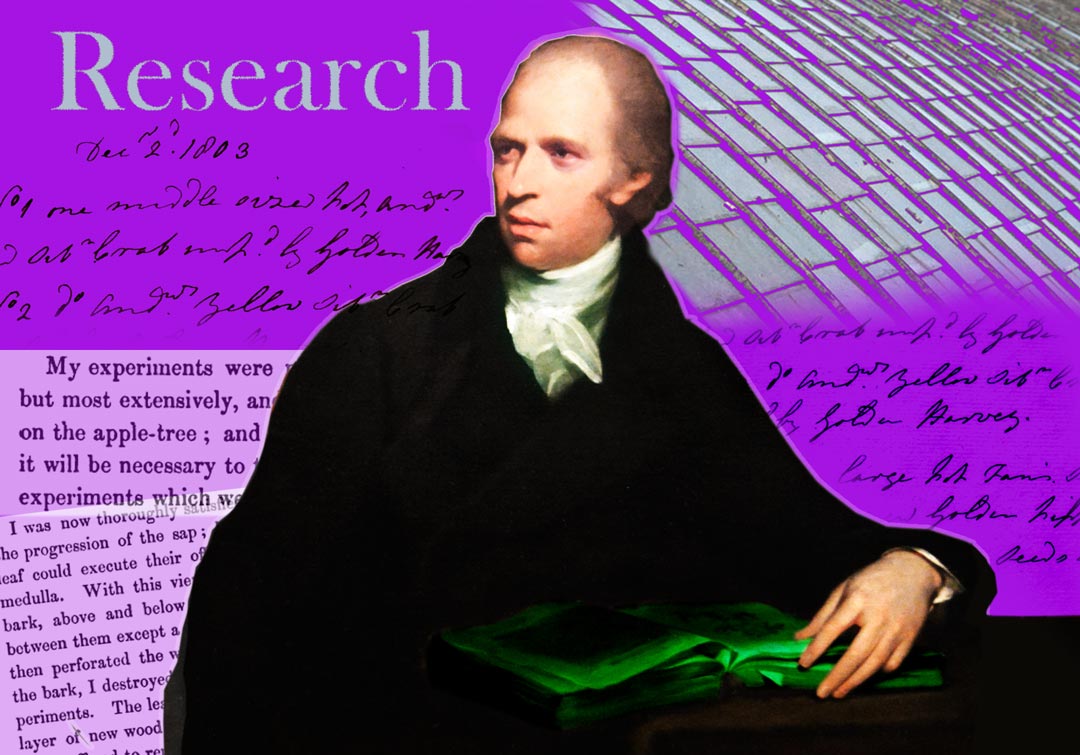 Over one hundred of Knight’s reports were published by the Horticultural Society and Royal Society, recording the results of his extensive and diverse research. He contributed papers to all the Horticultural Society’s ‘Transactions’ from their first publication in 1807 until his death. This linked his independent practical experimentation at his home in rural Herefordshire with the intelligentsia in London, which he visited annually. He was a Fellow of the Royal Society and developed close and productive relationships with the leading botanist Sir Joseph Banks (1743-1820) and the scientist Sir Humphry Davy (1778-1829), its successive Presidents.

His papers were on subjects as diverse as tree sap, manure, the effect of gravity on plants, climate change, fossils, and greenhouses. He designed and built a curvilinear greenhouse at Downton Castle to optimise the angle of incidence of the sun through the glass for ideal growing conditions. He invented a turnip seed drill and a razor sharpener. His observations on the specific gravity of apple juice were fundamental to the development of the cider industry.

“His mind was original, clear and essentially practical”

In all of this, his overriding interest was to improve the physical welfare of society.

His two published books focused on the apple: In ‘A Treatise on the Culture of the Apple and Pear, and on the Manufacture of Cider and Perry’, first published in 1797, he gave practical guidance on orchard management and making cider. Later, given his concerns about the declining quality of cider fruit, and harvesting the fruits of his own apple breeding programme, he recorded old and new cider apples and perry pears in his ‘Pomona Herefordiensis’, promoting four of his own new varieties.

The Pomona Herefordiensis was initially published in instalments to subscribers by the Agricultural Society of Herefordshire and subsequently as a complete volume in 1811. It was a high-quality production, illustrated with hand-coloured engravings from paintings mainly by Elizabeth Matthews from Hereford, reproduced by one of the best botanical engravers of the time. 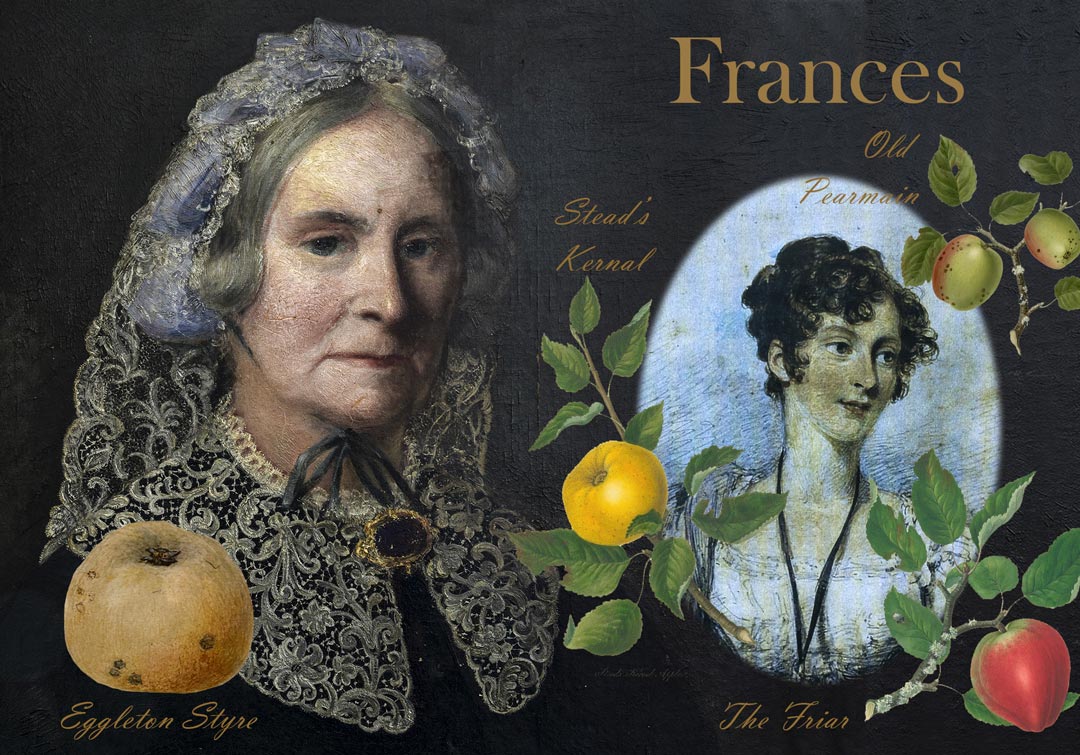 Home life was important to Knight, and his daughter Frances (1794-1881) was a particular favourite. From an early age she spent much time with her father in the gardens.

“From the time I could toddle after him, he made me his companion and the time that ought to have been spent in the schoolroom was spent with him in his garden”

Despite having been described by her father in the foreword of Pomona Herefordiensis, perhaps through humility, as “a very young and inferior artist of my own family” Frances was an accomplished painter – Knight goes on to describe her drawings as “most perfectly correct”.  She is unique as the only person to paint apples for both the Pomona Herefordiensis (Stead’s Kernal, Old Pearmain, and Friar) and the Herefordshire Pomona (Eggleton Styre) sixty years later. 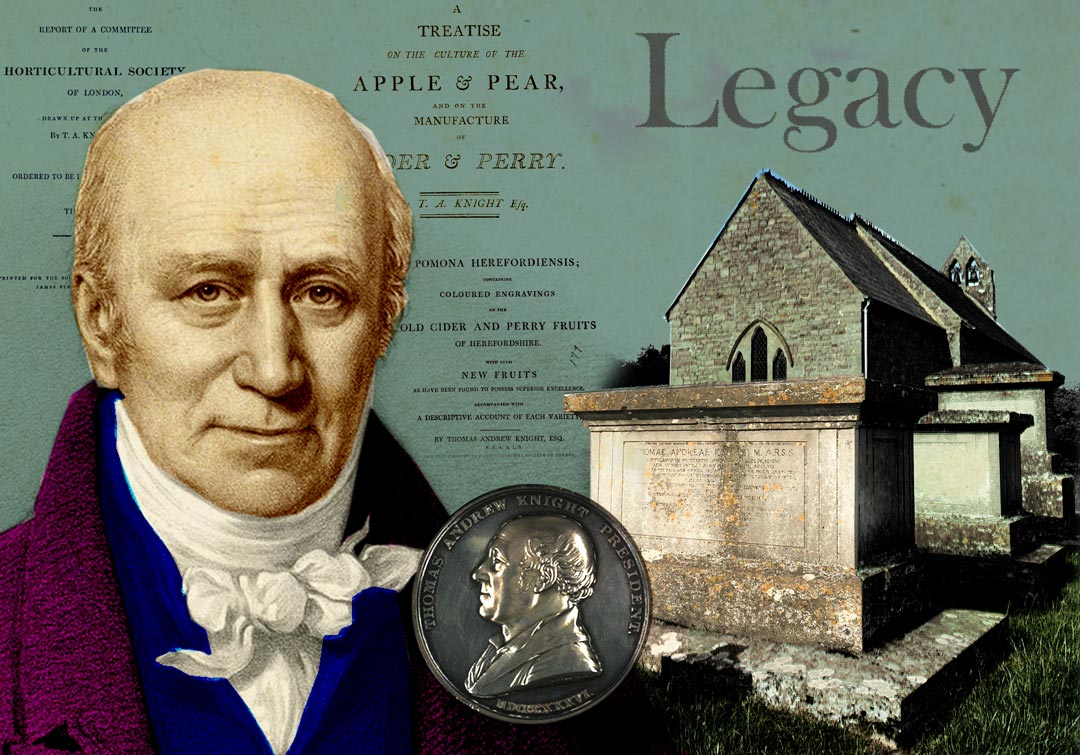 Knight’s experimentation was prolific and his conclusions penetrating. He would probably have thought of himself as a philosophical gentleman, but his scientific ideas were vastly influential although many of his pioneering ideas required elaboration and more detailed study by others.

“The great services he rendered to his country are not however to be measured so much by the actual work he did himself, as by the work he originated for others to follow up”

Knight was a source for both John Lindley’s scientific theory of horticulture and Davy’s chemistry of agriculture. He essentially outlined the process of evolution by natural selection fifty years before Darwin’s ‘On the Origin of Species’, and his breeding experiments are acknowledged in the first chapter of that work. He had thought about the influence of male and female parents on their offspring and what he called “instinctive hereditary propensity”. Furthermore, although his primary objective was to obtain new and improved varieties of apple, in 1787 he started breeding peas, being an annual plant where results could be more quickly observed than apples.  Knight crossed peas of different colours and noted that when the pollen of a purple-flowered plant was introduced into the emasculated blossom of a white coloured one all the resulting peas subsequently gave rise to plants with purple flowers, also observing for the first time how characteristics like height and blossom changed through the generations. His results were published in a Royal Society paper in 1799, establishing traits which were more fully described and statistically analysed into the principles of genetics by Gregor Mendel over sixty years later.

Corresponding with horticulturalists around the world, and sending plants to them, was rewarded with honorary memberships and medals from agricultural and horticultural societies across Europe and America, and in Russia and Australia. He exchanged seeds with a correspondent in Persia and sent large numbers of scions of his new fruit trees to the Massachusetts Agricultural Society, helping to develop the North American apple industry,

Knight had an enquiring mind, a keen sense of observation, and an ability to frame his investigations precisely. Shy and introverted, he worked largely independently in rural Herefordshire for most of his life, but his findings were profound.

His influence on the study of plants, especially apples and the new field of pomology, was far reaching.

Chris Hellowell’s brief was to provide four illustrations to accompany the story of Thomas Andrew Knight and show the importance of his studies of the apple. Working closely with the text and using Knight family portraits and works by Knight and his daughter Frances, Hellowell has created a stunning series of digital collages.

Chris says of the commission “It has been fascinating and highly rewarding to work with such beautiful original imagery and text. I gained a deep insight into the period and scientific environment in which Knight worked. I hope this has been communicated to some extent in the designs. As an artist I feel a need to connect with other people and sadly the pandemic has isolated so many of us. This exciting commission was a shot in the arm as it gave me a sense of purpose.”

Thanks to Francis Acton of Acton Scott; the owner of Downton Castle; Philippa Wiggin of Downton Hall; the library staff at RHS Lindley Library; Rhys Griffiths, Senior Archivist at Herefordshire Archives and Records Centre; and Hereford Cider Museum Trust for providing access to their Collections, and to Tom Wall for sharing image research. 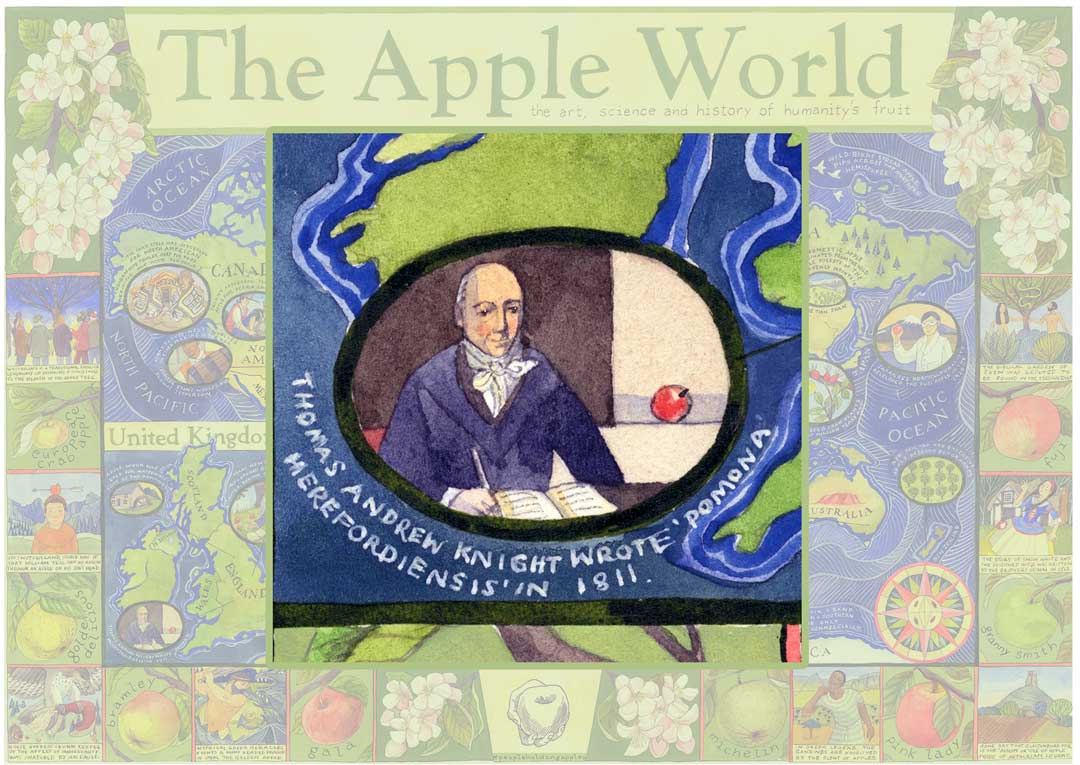