The Tale of William Tell

The enduring symbol of apple and arrow 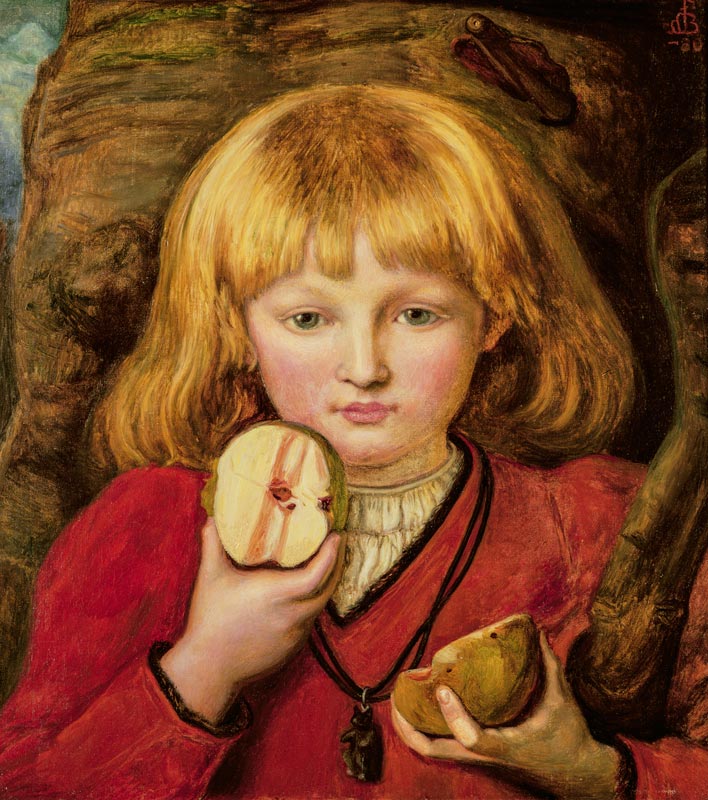 The apple and the arrow. It could only be the familiar story and imagery of William Tell. On 18th November 1307, Albrecht Gessler, the local steward of the Habsburg Duke, put a Habsburg cap on a pole in the market square of Altdorf, and proclaimed that everyone passing should bow to the hat.

William Tell, visiting with his son from a nearby village, refused to bow down and was arrested. 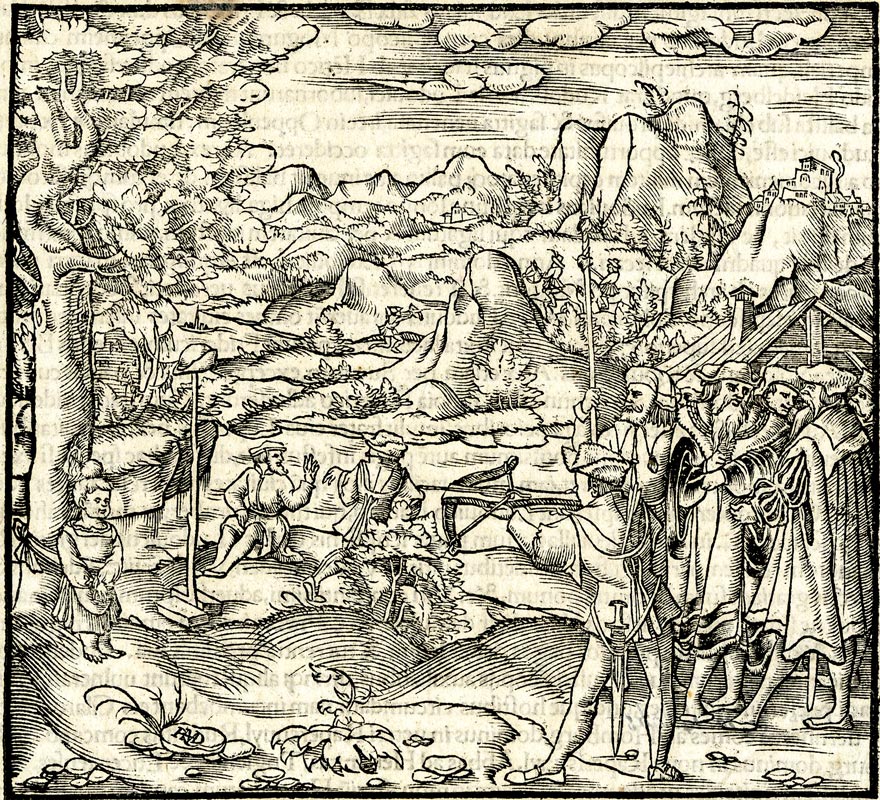 Gessler decided that he would challenge Tell to shoot an apple on his son’s head from a distance of 120 paces.  So Tell drew two arrows from his quiver, and naturally enough split the apple in two, and not his son’s head, no doubt to the annoyance of Gessler.

“By heaven! the apple’s cleft right through the core. It was a master shot I must allow.”

Not to spin it out too far, Tell was taken in a boat to be locked in the castle of Küssnacht across the lake. He escaped during a storm, killed Gessler, and became a prominent fighter for the freedom of the Swiss lands from the Habsburg yoke. The apple and the arrow are key elements of Switzerland’s foundation myth, a story often retold. 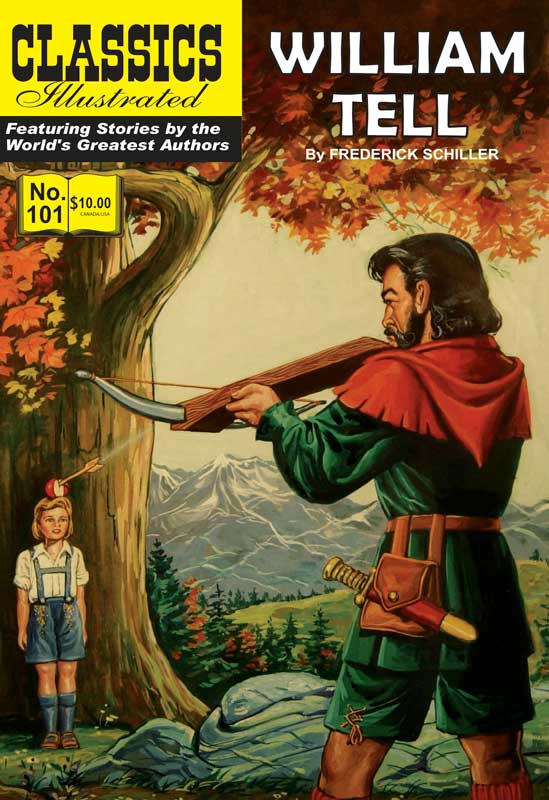 There are two things you might not know about the story: firstly, it most likely never happened at all; and secondly, it’s by no means the only example of the apple and the arrow.

William Tell may have lived in much the same way as England’s own favourite archer, Robin Hood, which is to say, scarcely at all. There probably were real historical figures around whom many stories and myths collected – a bit like barnacles on a boat. In essence, William Tell’s story wasn’t fully written down until 250 years after the event; the dates are confused – and the uprising he was supposed to have led never happened. However, the Swiss Federation’s foundation Oath of Rütli did take place at around Tell‘s time, and still forms the basis of the country’s constitution. 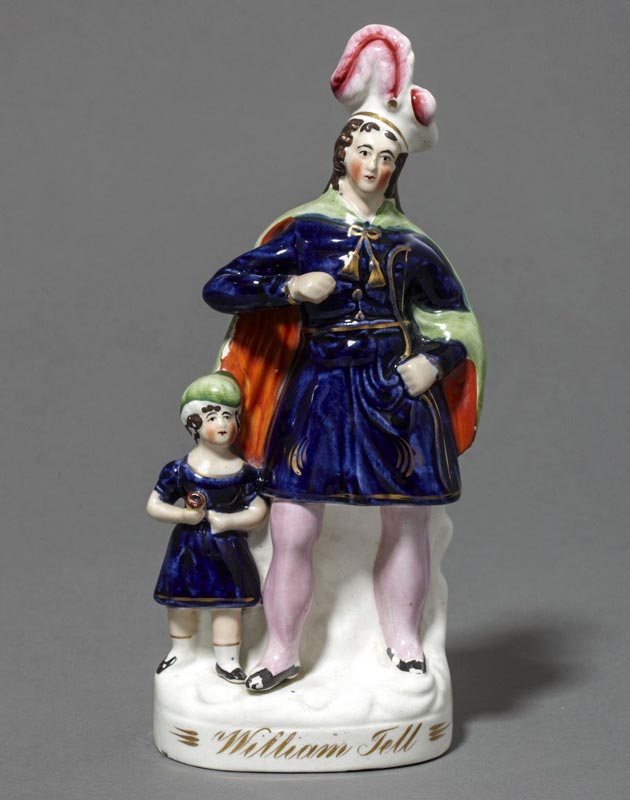 The motif of an archer shooting an apple from his son’s head is not uncommon – and at least two examples pre-date William Tell. The first takes place in tenth century Denmark and involves King Harald Bluetooth, who, hearing of a man called Toko boasting of his skill at archery, commands him to shoot an apple from his son’s head. Toko succeeds, and he, too, held a second arrow, with which he would have killed the king. 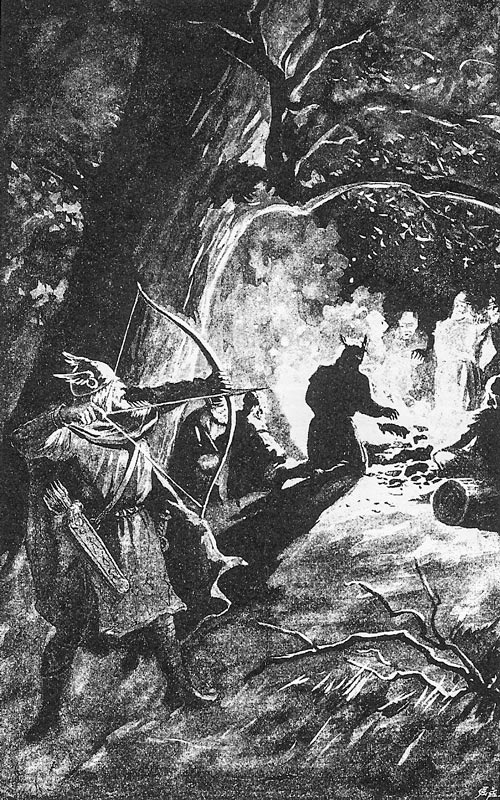 Several other versions of this motif crop up in Scandinavia and Germany during the next four hundred years or so – and also one in England, in the Viking-influenced Northumbria, where William of Cloudesley boasts that he will shoot an apple from his seven-year-old son’s head. This is told in the ballad of Adam Bell, Clim of the Clough, and William of Cloudeslie, first recorded in the sixteenth century, which is possibly a part of the original Robin Hood legend, and whose story is definitely one source of Walter Scott’s Ivanhoe.

“But for your love, said William, I’ll do more masterly.
I have a son of seven years old, He is to me full dear,
I will tie him unto a stake, You shall see him that’s here.
I’ll lay an apple on his head. Go six score paces fro’,
And I myself with broad arrow, Will cleave the apple in two.” 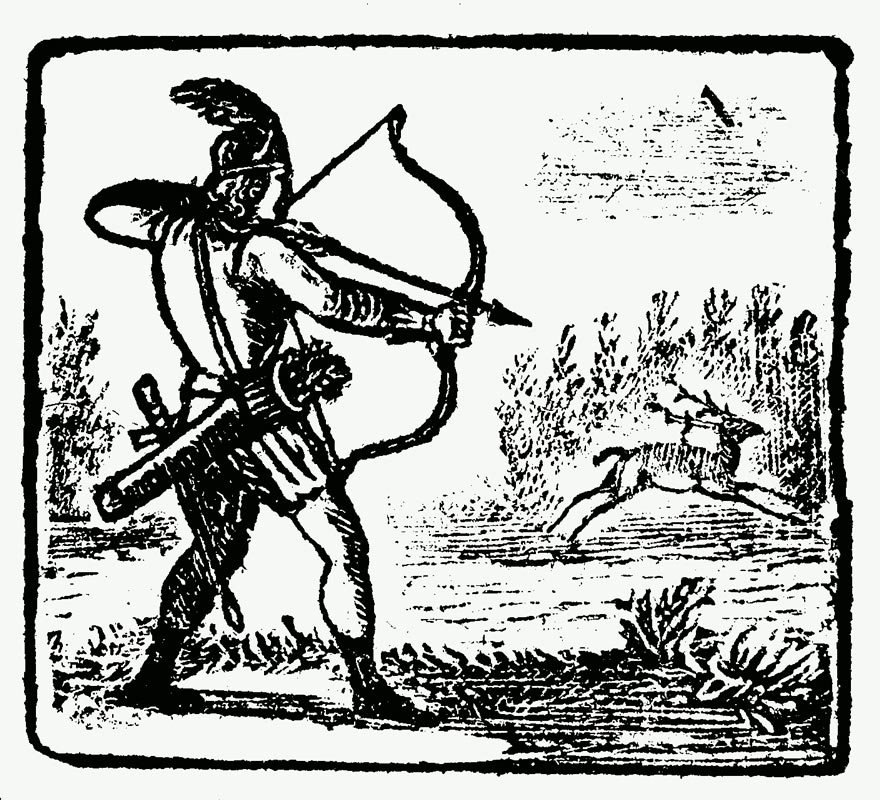 Crawhall - Adam Bell frontispiece of The History of Adam Bell, Clim of the Clough, and William of Cloudeslie c1840

But, in the end, it doesn’t really matter how true these stories are. What they show is the enduring power of the motif of the apple and the arrow, iconography that is taken up by different art forms – and they show, too, the power of story, of how we use legends and myths to make sense of and give shape to our lives. 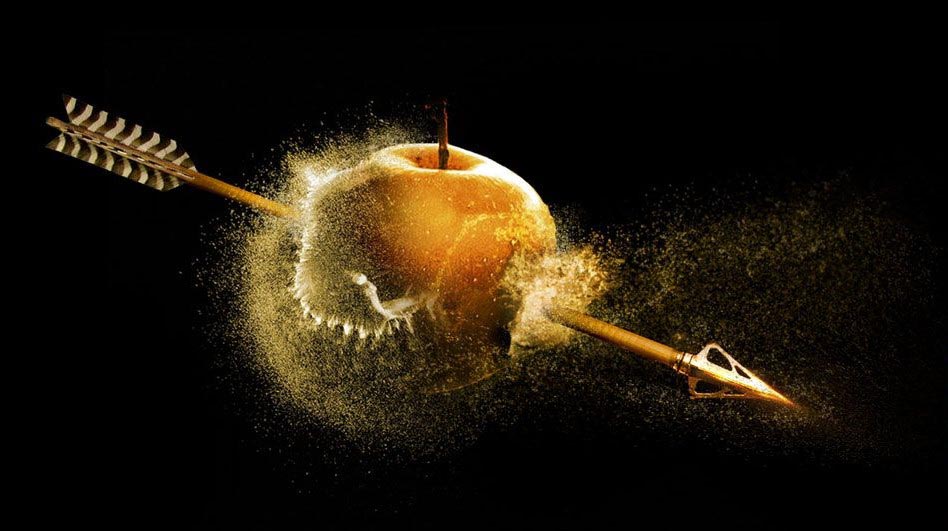 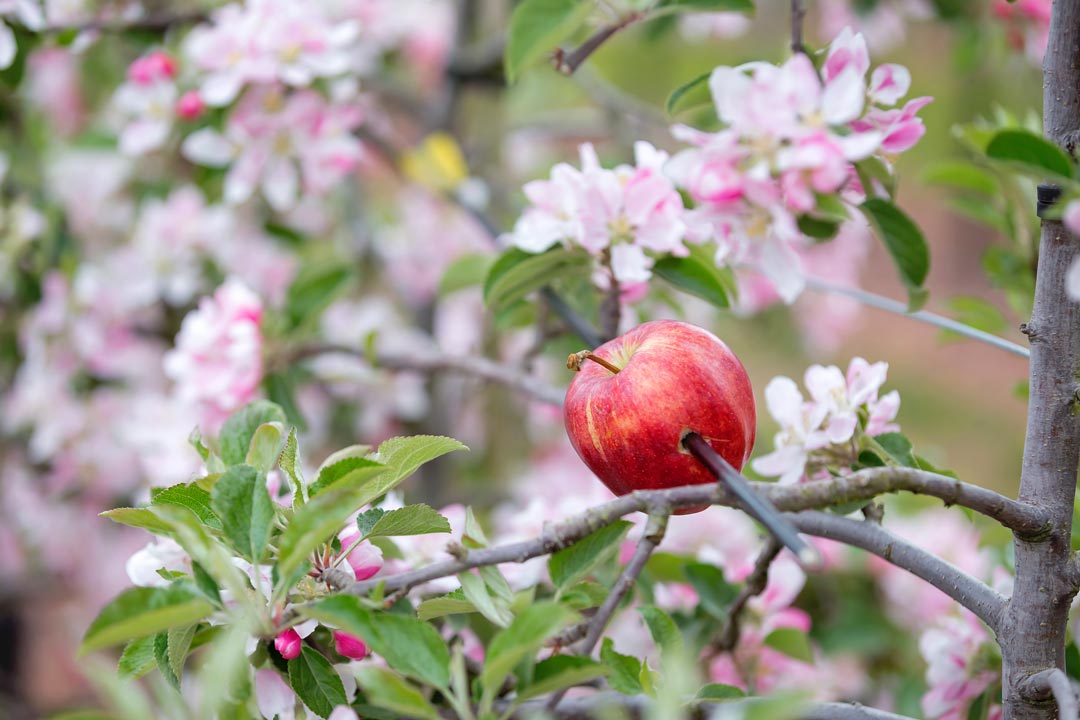 Apples & People commissioned Hereford-based photographer Gabriella Karney to work with themes from the Tale of William Tell – trust, fortitude, family, and of course the apple and arrow. Apple growers make long-term, inter-generational investment in their orchards. Here Gabriella captures some of Herefordshire’s apple growing families amongst their own apple trees.

This commission was partly inspired by the playfulness of some of the pickers in a 1930s photograph in the collection of Wenatchee Valley Museum and Cultural Centre in Washington State, USA. 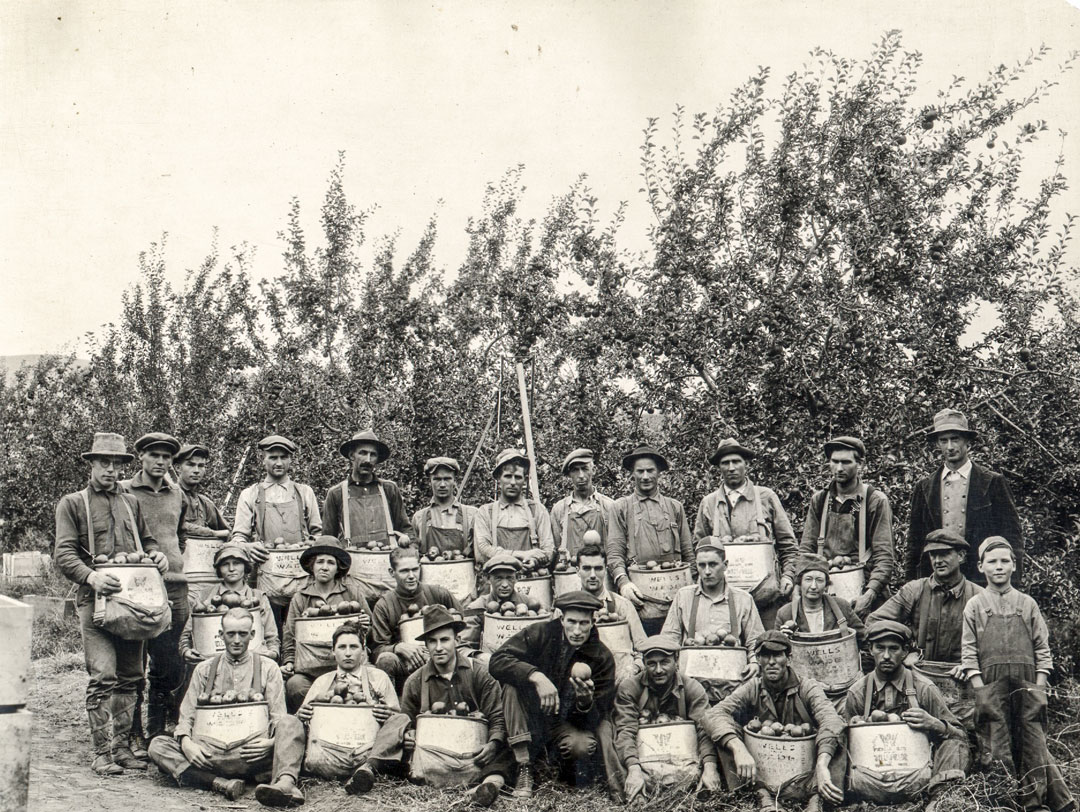 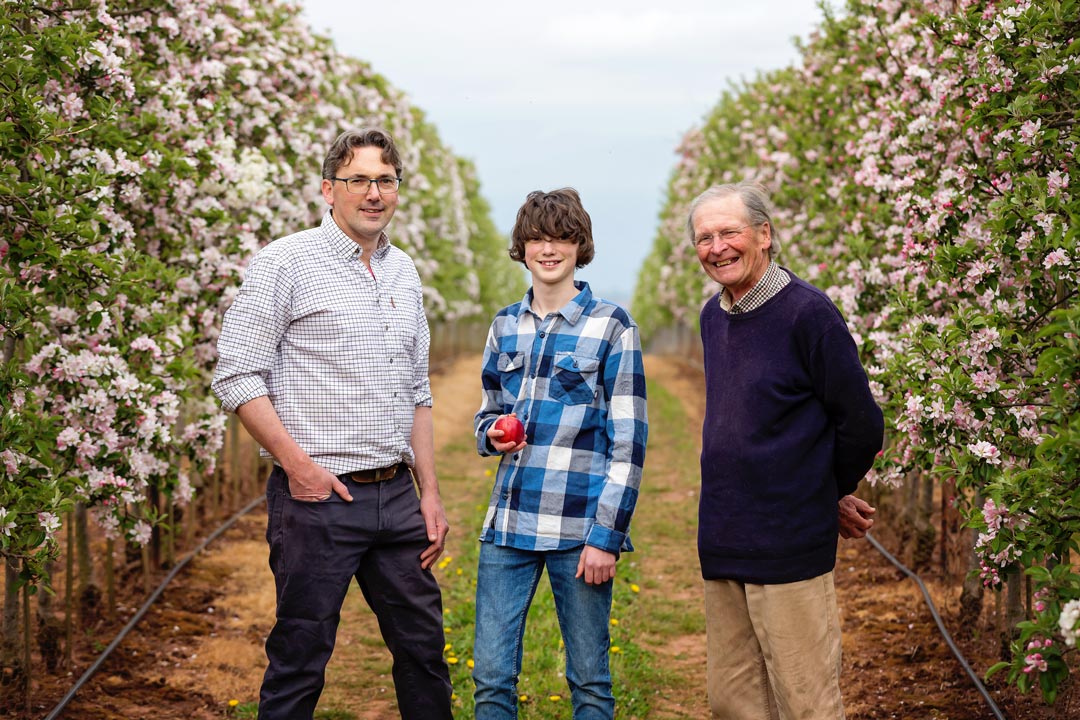 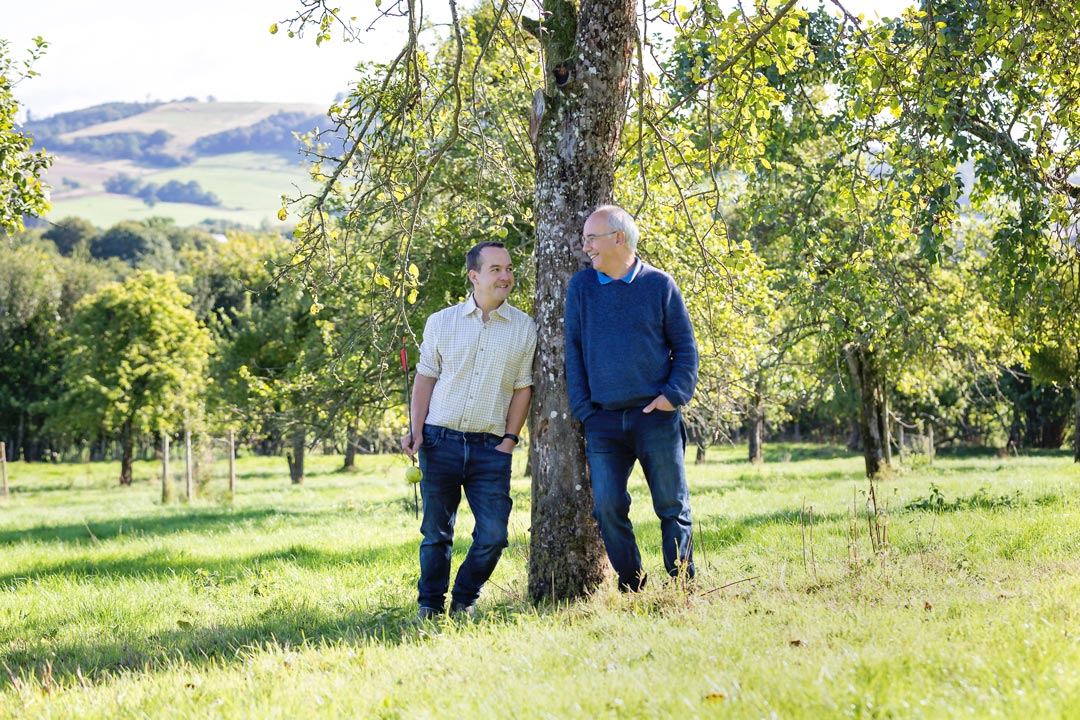 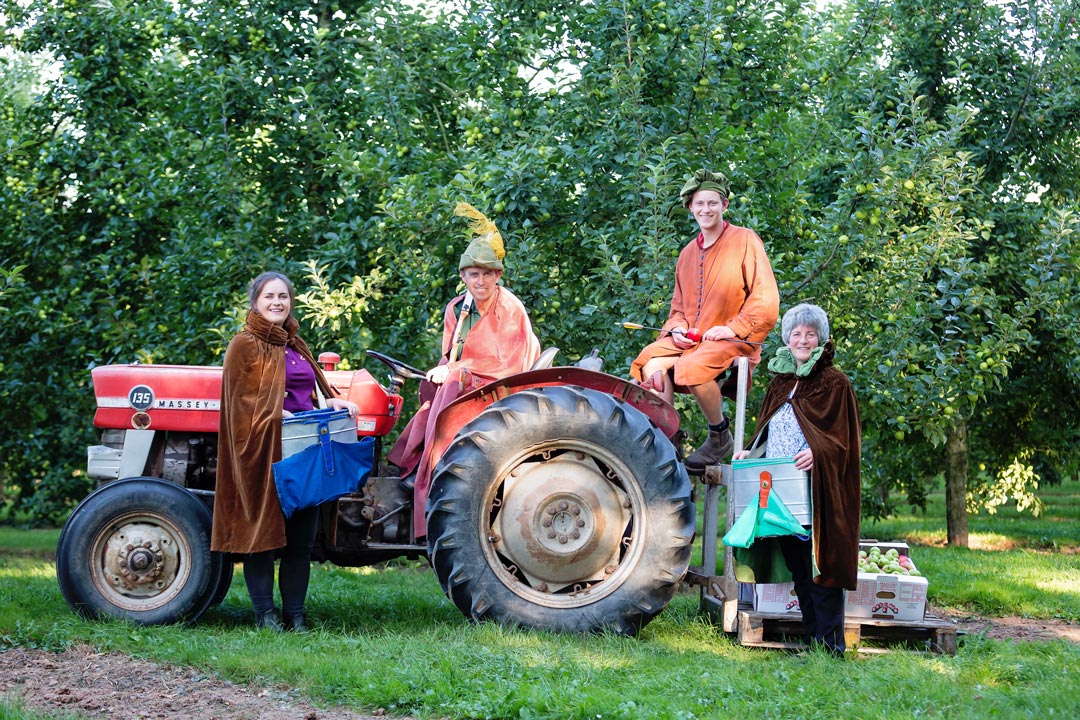 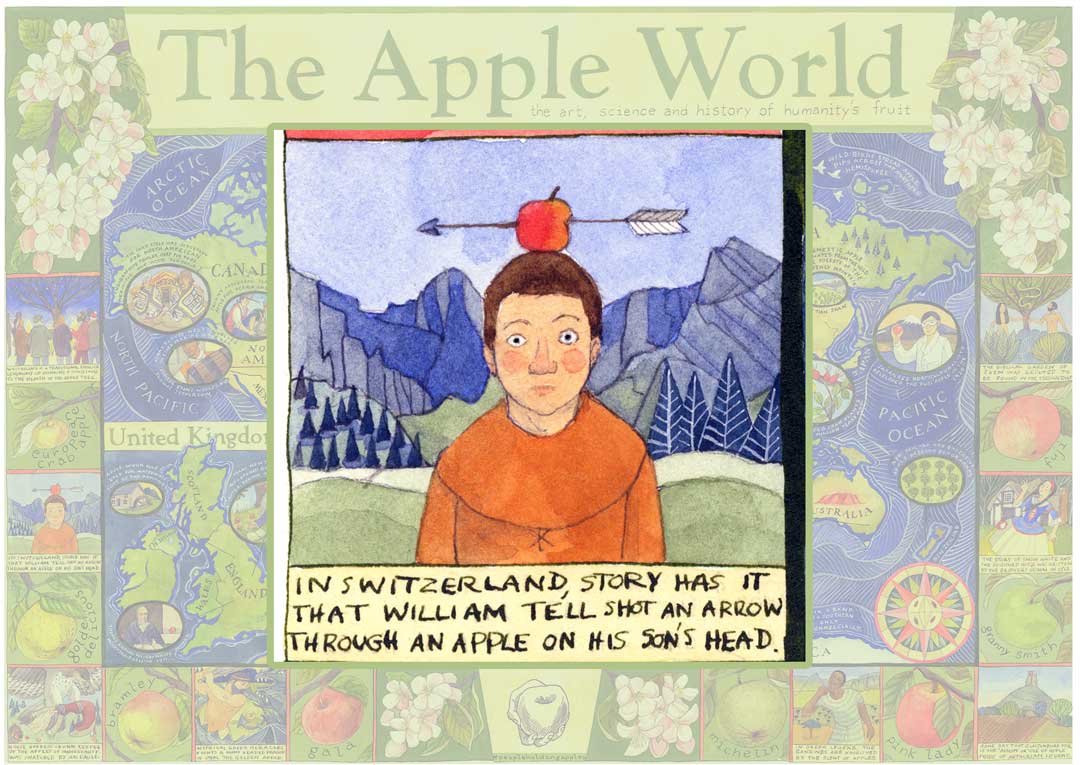