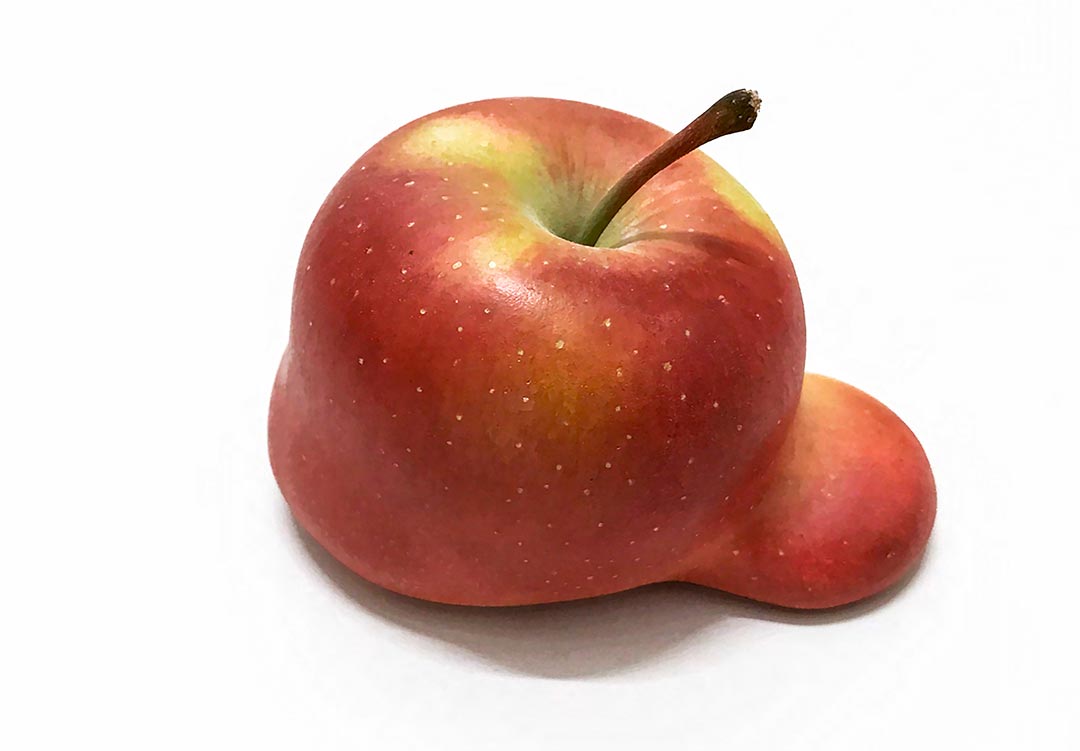 Yosuke was born in 1975 in Mito city in Ibaraki prefecture, just north of Tokyo. He studied art in Tokyo and Amsterdam and for the last ten years has had studios in Berlin and in Yamanashi prefecture in Japan. His art asks us to think deeply about what makes an apple an apple.

“An apple, which includes the meaning of being a fruit in itself, could be interpreted as ‘the fruit of fruit’, or in other words, ‘the most un-special’ fruit on our planet. The relationship between me and apple has been quite long now, which does not allow me to make an excuse of ‘I don’t know much about it, it’s only one of my many motifs.’ ”

Yosuke has worked with the apple for over twenty years but says  “To be honest, I didn’t quite understand why I was interested in creating apples…”. In 2004 he made his first melted apple, life-sized highly realistic yet distorted fruit that blur the distinction between reality and fiction, between a singular artefact and universal understanding. His melted apple sculptures are intended to deceive the viewer’s eye. 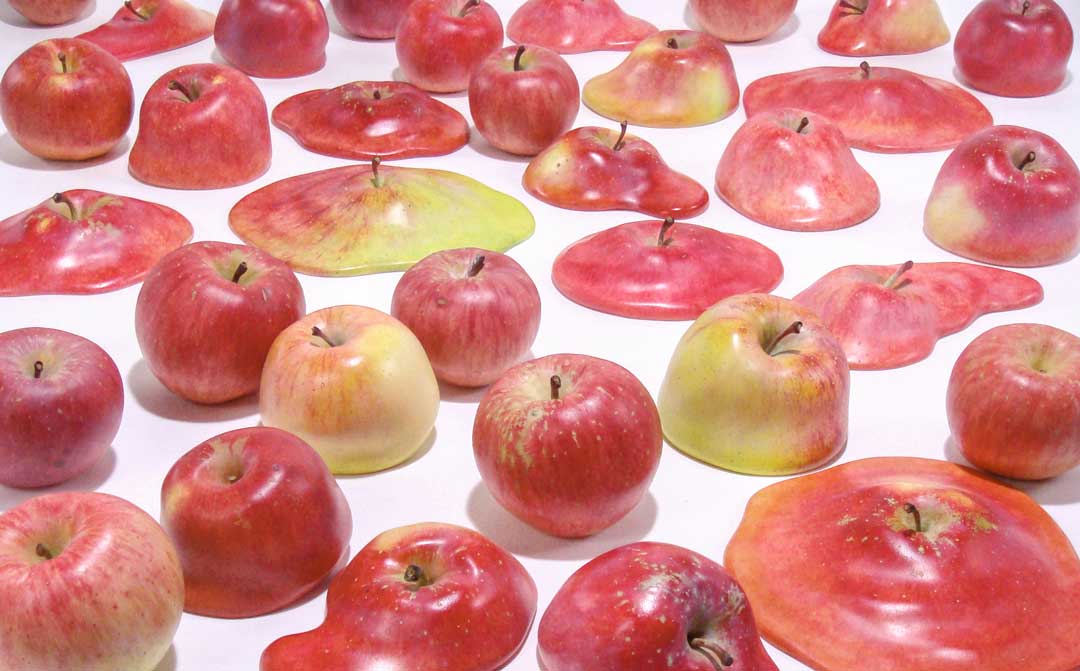 An assemblage of Yosuke Amemiya’s Apple sculptures © the artist

“A melted apple doesn’t exist, so it’s like saying ’this is a lie’. It’s like the heel-and-toe driving technique, stepping on the accelerator and brakes of recognition at the same time. I want to create a state where the perception is shaking even though the sculpture is stationary.”

“distorted fruit that blur the distinction between reality and fiction”

Since 2014 he has created approximately 70 apple sculptures, some unmelted, some black and white. Initially he cast polyurethane in clay moulds, later carving the apples by hand from wood. The surfaces are finely coloured with oil paint.

“With each apple, I had to confront the torment of the surface needing to be more realistic than a real apple, as a melting apple would lack some reality. I had no choice but to seriously think, ‘What is it that makes an apple an apple?’”. 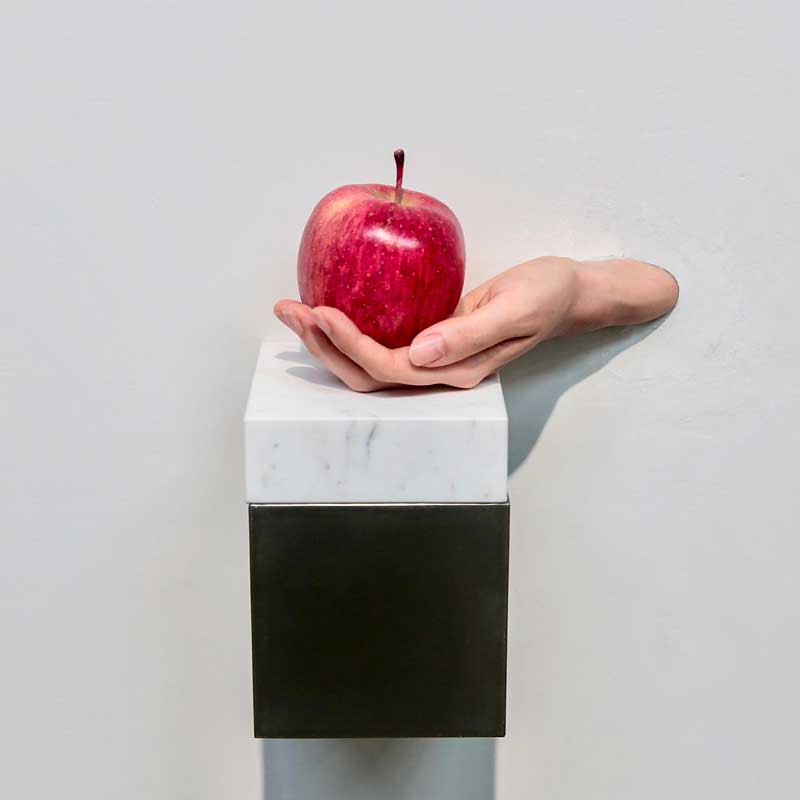 ‘A Hole, and You’, a solo show in 2018  in Yosuke’s hometown in Japan, featured his installation ‘Apple and Hand’ in which a model apple is held in a living human hand (the person standing the other side of a wall). Yosuke says “I hired a few models who have nice left hand, not me”.

“What is it that makes an apple an apple?”

Further inspired by the differences he observed between apples in Europe and Japan, he undertook detailed studies of apples, including research at the Aomori Apple Museum in Kuroishi and training with a Japanese apple farmer. He tends apple trees at his studios.

“One of the fundamental reasons why I have continued creating works of apples is because they have a wide variety of surface appearances. Despite the fact that apples are one of the most popular fruits in the world, their appearances differ widely depending on where they grow. In fact, they can vary widely even when they come from the same tree. I used to delightedly enjoy expressing the wide variation of their appearances when I started to create works of apples, but from a certain point, my interest started heading towards ‘the most apple-ish apple for everyone’ instead. I became puzzled; how can I make an ‘apple-ish apple for everyone’ when there are infinite numbers of local varieties (which is to say, infinite numbers of ‘my apple’)?

When I paint the surfaces of my apple sculptures, I do not just copy the fruit. It is as though I investigate the story of how the apple grew, in what kind of landscape and weather, how it was picked up, and how is was stored before it came in front of me. By assimilating all of this I finally paint the ‘current’ status of the apple. It may sound like a complicated process, but unless I can fully visualize the chronological sequence of its story, the apple would end up looking unnatural. I ask how its bud blossomed into a flower; how it made its fruit; when did dots appear on its surface; when did it start to turn red; and why does it have an uneven pattern? and so on.

And to add even more complexity, this sequence needs to reflect its natural conditions. For example, the leaves photosynthesize with the sunrays that come from above, and the flowers bloom in that direction too. Then as the apple becomes heavier and hangs lower. This is why the stems of apples are mostly curved – the sky exists overhead but gravity pulls things earthwards. So perhaps the reason why many people feel it’s natural for an apple to a curved stem is because we humans have spent such a long time on the surface of the Earth, developing that universal basis of recognition. Human eyes are actually quite accurate in judging things. Even if there were a symbolic pattern or colour that would resemble an apple, if the person cannot (even unconsciously) find a ‘universality’ that apple would not be judged to be realistic.” 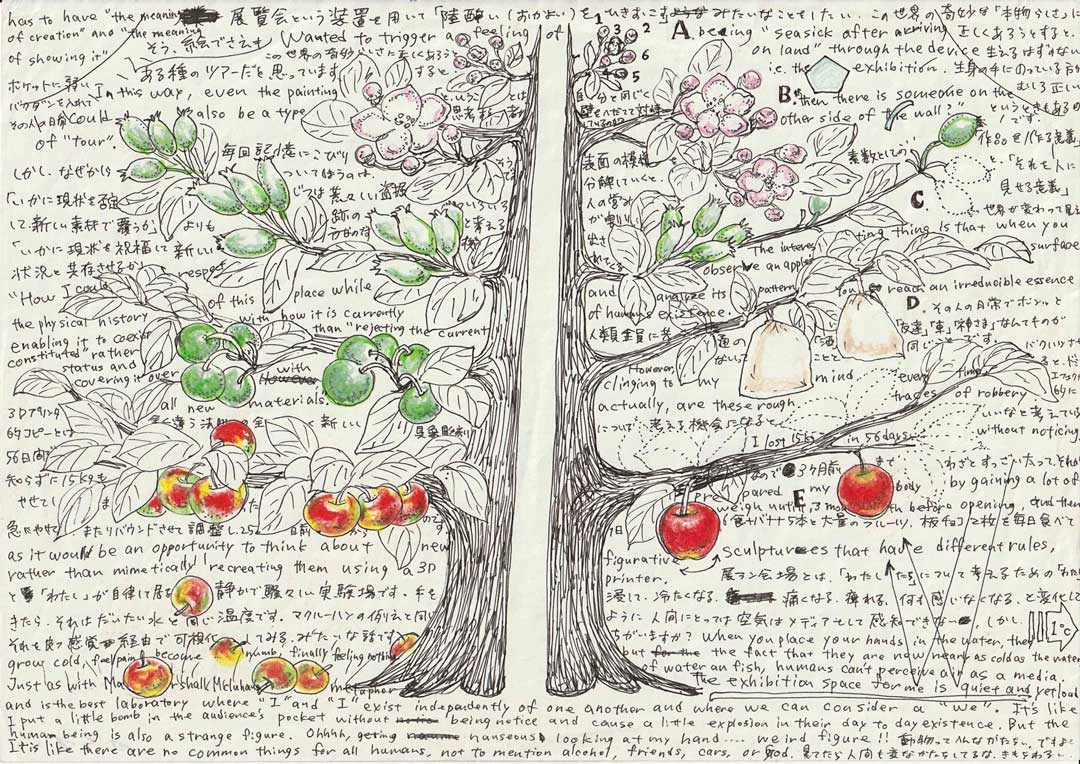 In Japan, to produce large, strongly coloured, apples, farmers will pick off most of the blossoms. They turn the ripening apple around, pick its leaves, and use mulch or reflective material to reflect light from the ground. Some cover the fruit with bags to increase anthocyanin, promoting reddening.

“What the Japanese farmers are doing is actually modelling and colouring. It could be said that apples are already “sculptured” by the hands of the farmers.”

Analysing the surface of an apple, Yosuke sees the human behaviours that have caused this:

“By reading their surfaces and playing backwards the history of farming that the apple had experienced, I can see ‘humans’ appearing as motion pictures from their surfaces. To look at surfaces of apples for me, is to look at society and civilization.”

The domestic apple was only introduced to Japan 150 years ago, and the largest apple growing area is Aomori prefecture, where the weather is not entirely conducive for apples, with heavy snow in winter and hot humid summers. The weather necessitated these human interventions in Japan, which Yosuke compares to Europe, where apple trees flourish on their own and their fruit therefore are generally smaller with more varied skin colours because of receiving differential sunlight.

Against this backdrop of different farming practices and the proliferation of apple varieties Yosuke set out to sculpt a ‘universal apple.’

“I admit from the beginning that no ‘universal apple’ that is shared among every single person on earth could actually exist at all.  But the concept was to stop and think about what ‘universal’ could mean for the human species, at this time when the internet has become an all-embracing infrastructure and where words such as ‘neural network’ and ‘deep-learning’ have started being used in daily conversations.”

“the most apple-ish apple for everyone”

‘Apple (Universality) 2019’ is a life sized painted wooden apple, made of apple wood. The universal or “most general apple” has been derived using artificial intelligence from the countless images of apples that currently exist on the internet. 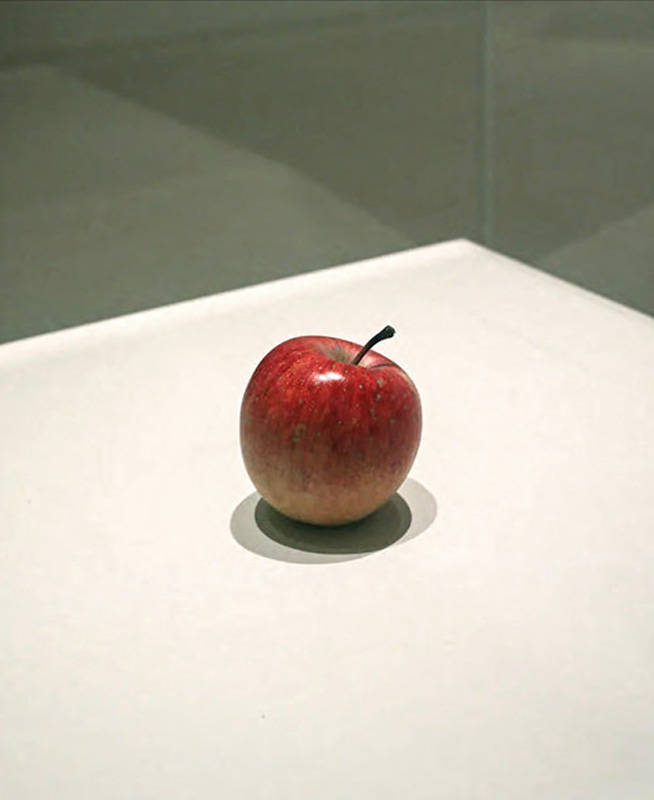 “Programmed by data scientist Shuto Mikami, the AI searched for images of ‘apple(fruit)’ on the internet in various languages and then judged the outline of a possible apple and would cut it out, providing a database of cut-out images learned through machine-learning (a learning process through a neural network). We then passed this through a search engine again to select the one ‘apple’ that was the ‘most apple-ish apple’ with the highest possible accuracy with as little human intervention as possible. One thing that strongly interested me when I saw the continuously generated results of the machine-learning process was that it seemed as though it was tracing the history of art. As though it began from the perspectival altarpieces of Jan van Eyck, then proceeded to the smooth gradation invented by Leonardo da Vinci, then went through the brush-strokes of Rubens and the light and darkness of Velázquez, Turner, Goya, Impressionism, and then the new era since the appearance of Cezanne, which then proceeded to cubism by incorporating the ontology of three-dimensions.”

“For me, it seemed as though the whole story of humanity and art history was being re-enacted when I looked at the machine-learning process of an apple. Although this research itself would not be reflected in my sculpture, I implemented this research from my desire of wanting to see with my own eyes how ‘universality’ may perhaps appear through ‘generality’ achieved by percolating a database derived from the vast internet.” 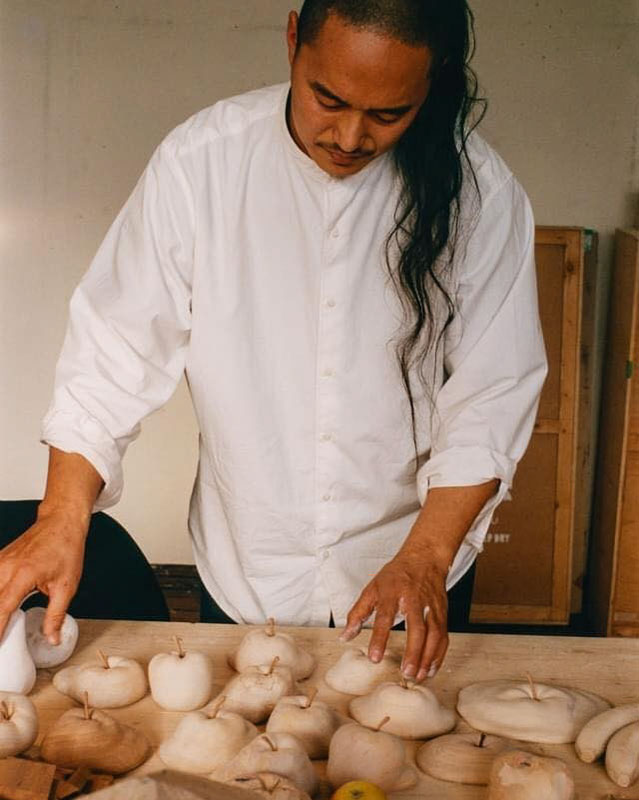 Reflecting on the limitless variety of apples caused by an apple pip not growing true to type, cross-pollination between cultivars, and different growing methods adopted as the apple spread around the world, Yosuke says:

“Honestly, I feel it is not myself who proactively came up with this idea, but the apple made me think of it instead…Apples are fundamentally programmed to diverge from pure-blood and to become diversified. This led me to think about the ‘universality’ that encompassed this diversity”.

We are delighted that Professor Kazu Matsumoto of the Department of Agriculture at Shizuoka University in Japan has become the thirteenth member of Apples & People’s International Advisory Panel, the apple experts from around the world who have been helping to inform our exhibition programme.