A Harmony of Apples & Sensation 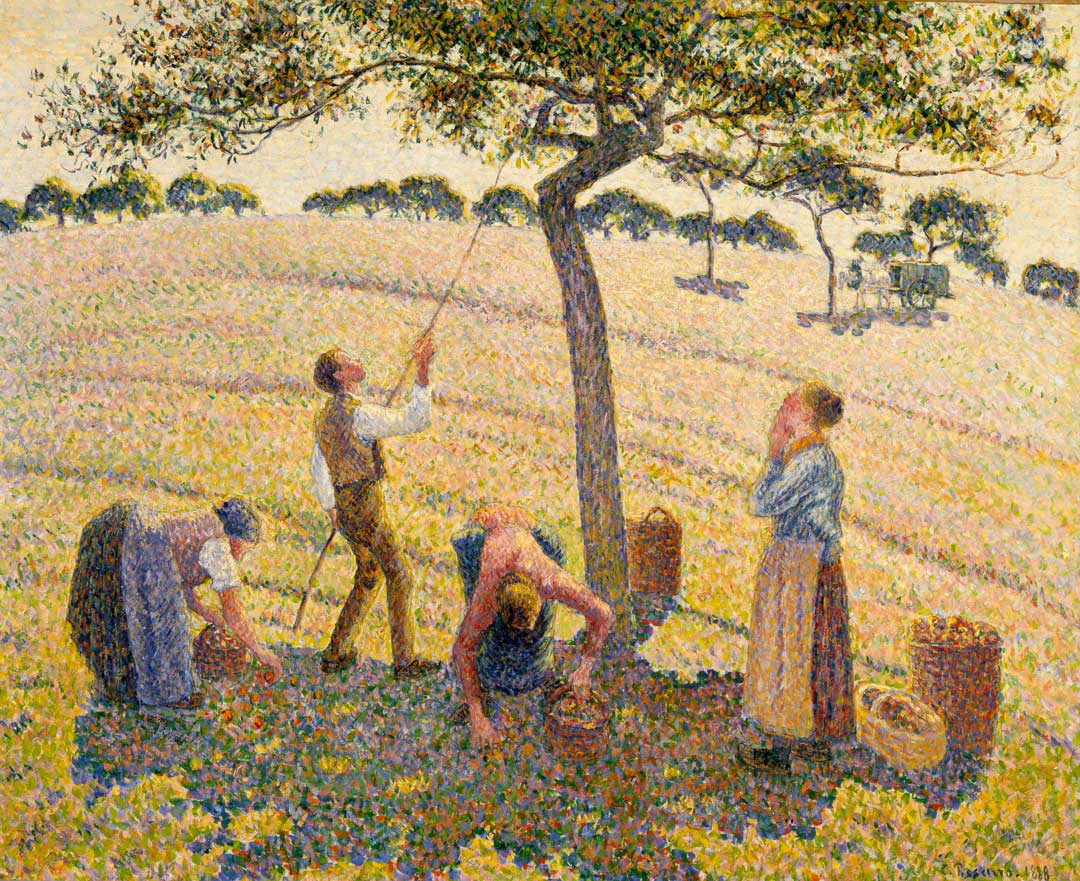 Early autumn, high noon and the heat of the sun is beating down on a rural scene of labour and fruitfulness. Apples are being shaken from a tree’s branches by a man while one woman looks on and two others stoop to gather the harvest.

There is a harmony to Pissarro’s apple harvest – a harmony that exists on many levels. There is the harmony between humanity and nature – seen in the gathering of apples. There is also the carefully judged harmony of the painting’s composition – the apple tree’s crooked form is balanced out by its shadow and the figures contained within it. The field beyond, with its deep curved furrows, is itself balanced and in harmony with the curvature of the horizon, and by extension the earth itself. Yet most strikingly there is a harmony of colour, a multitude of technicolour even, in the form of dots.

Pissarro’s Apple Harvest was painted in 1888, two years after the last Impressionist exhibition and fourteen years after the artist exhibited at the first Impressionist exhibition which opened on 15th April 1874. His Apple Harvest marks a point of departure (briefly) from his ostensibly Impressionist style of working, and instead sees the artist experimenting with the technique often described as Pointillism which defined the work of artists such as Georges Seurat and Paul Signac under the term Neo-Impressionism. These artists explored colour and optics by breaking down form and light into tiny coloured specks or dots which are then modulated by the human eye into recognisable forms.

Pissarro’s choice of theme for this experiment was itself no spontaneous affair. He painted three versions of this subject between 1881 and 1888, showing his attention to the composition and also the form of this particular apple tree with its bent branch. The largest of these paintings was exhibited in the last Impressionist exhibition alongside Seurat’s ‘A Sunday on La Grande Jatte’ (1884) and Signac’s ‘The Milliner’ (1885). These works together formed something of a manifesto of Neo-Impressionism.

In many ways Pissarro’s final 1888 Apple Harvest is a culmination of years of experimentation, and as such does have a sense of something idealised, a synthesis of a scene. His own approach to developing a painting was also about harmony. A harmony of the real, viewed, elements with his particular sensation of the real. Interestingly he is quoted as having said “the sensations revive in September and October”. With this statement it becomes clearer why an apple harvest would have been the ideal subject for Pissarro – if the apples represent seasonality and change, they might also represent the gathering of the artist’s own sensation in paint. On painting, he also remarked to his son, the artist Lucien Pissarro, “it must be a synthesis of the thing … let it go, a little craziness”.

As well as observing the harvesting of apples, Pissarro would paint orchards throughout the seasons and keenly observed his own patch of land at Éragny moving from spring blossom to the sparse, bare branches of winter.  He also keenly observed and experimented with techniques that would capture the most subtle modulations of colour, light, weather and atmosphere. Three scenes of the orchard in Éragny painted between 1895 and 1902 demonstrate his attention to these subtle shifts in his surroundings. 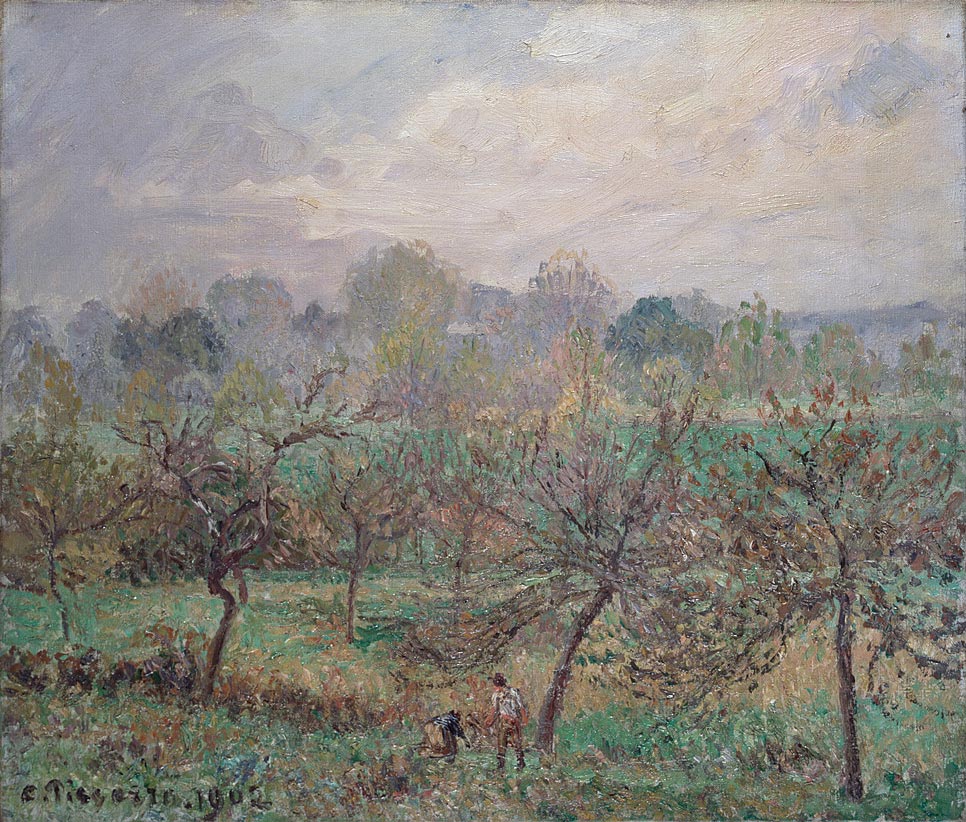 “Pissarro was one of the most sincere and imaginative painters of the French countryside, who felt a unique sympathy with those who lived and worked in the fields and orchards around the village of Éragny-sur-Epte, where he spent the last 20 years of his life.” 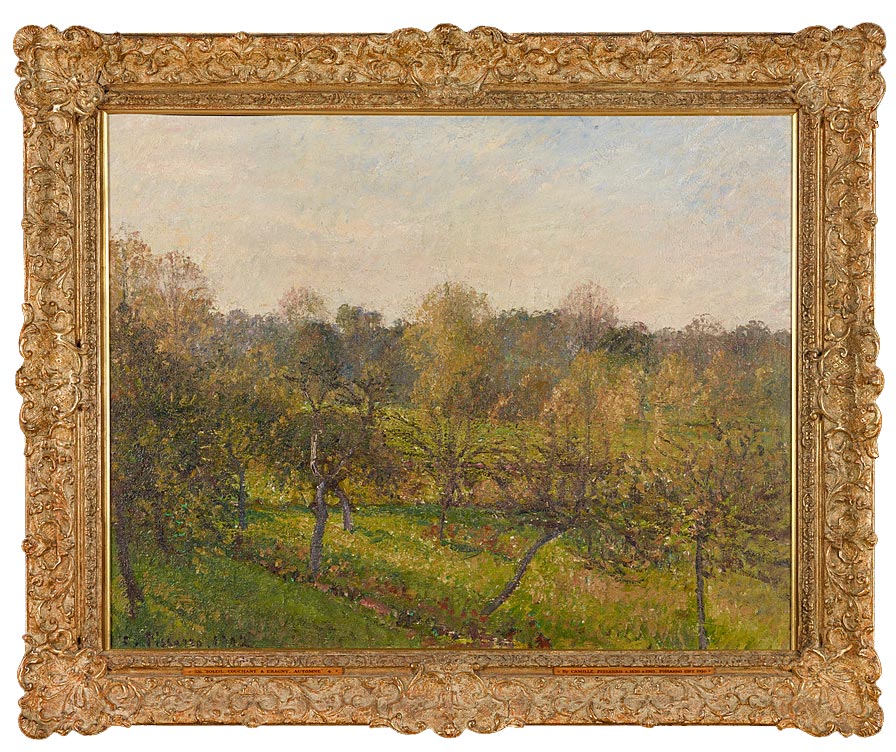 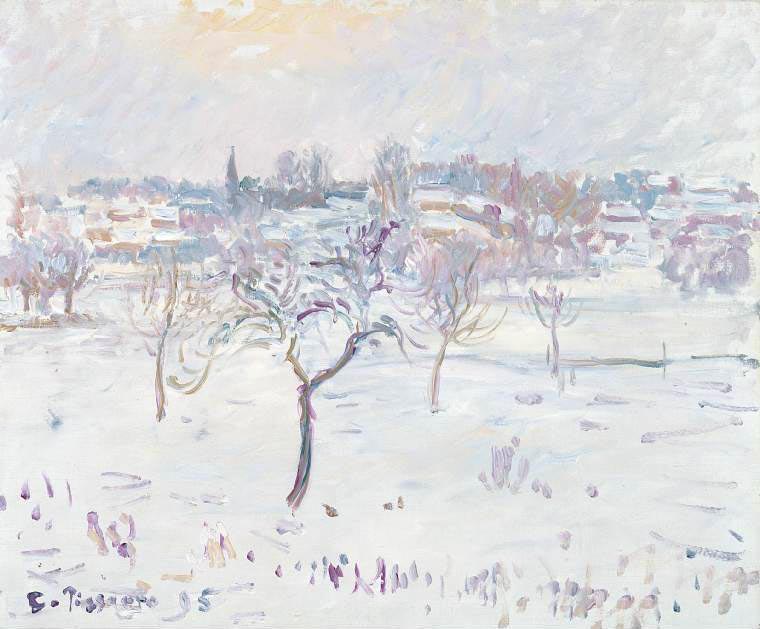 As well as his observations of nature, Pissarro’s orchards are also the setting for rural labour, with the cycle of the year being marked by the presence of the people who work the land. This subject matter ties in with Pissarro’s political views and his increasingly anti-bourgeois stance, favouring instead socialist ideals and those against capitalism. The themes of his paintings were therefore an expression of his views and from the 1850s he was determined to paint landscape and rural subjects. In many ways his landscapes with their rural labourers were a statement against the speed of modernity being felt around France at the time – and instead presented a view on to an unchanging world which raised up the humble peasant as a model of humanity.

To return to Apple Harvest, Pissarro’s selection of one crooked apple tree and the human labour involved in gathering its apples presents the artist’s vision of a harmonious landscape in paint. A landscape that itself harmonises paint, political ideology and the sensation of being an artist at the turning point of the year.

Paintings by Richard Gilbert with a film realised by Christopher Preece 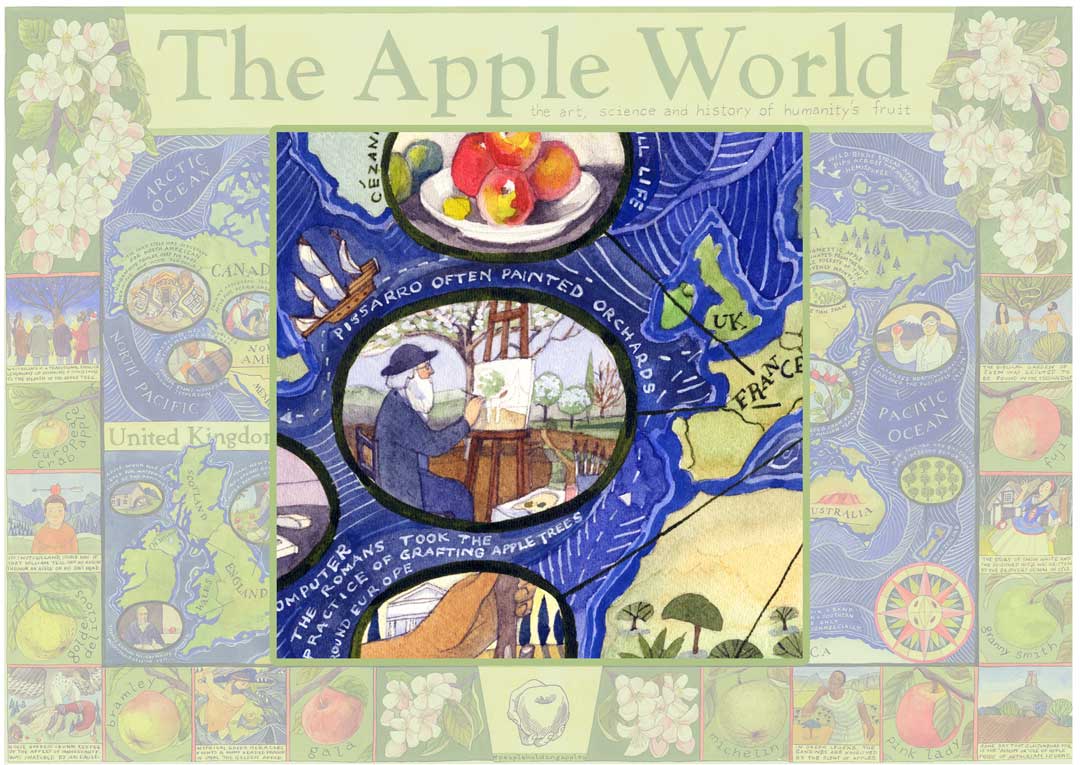 Valuing Our Orchards
Scroll to top